Oregon St. celebrated Senior Day by closing out the regular season with a 78-76 overtime win over Arizona St. Saturday afternoon. In so doing, the Beavers paid back the Sun Devils for their 86-82 overtime win a month ago in Tempe.

Oregon St. jumped out to a 9-1 run, but Arizona St. answered with a 9-0 run of their own, and it was apparent early that this one, like the first meeting, would probably not be a thing of beauty, but would be highly entertaining, competitive, and uncertain as far as the outcome goes.

The Beavers would take a 33-28 lead to the locker room, with underclassmen, not the trio of starting seniors, showing the way.

Angus Brandt would find himself in foul trouble, whistled twice in the first three minutes, and seated on the bench alongside coach Craig Robinson the rest of the first half.

Except for the times Robinson was busy jumping all over the officials, which would become a frequent sight. Early on, it seemed the trio in stripes just weren't up to game speed, with several events just not seen accurately, if at all. 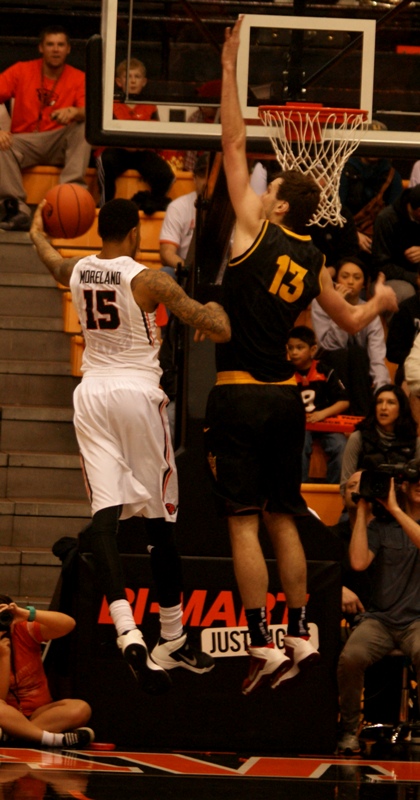 Junior Eric Moreland, above, was his usual force as far as rebounding and blocking or altering shots went, but found his offensive stride as well, with 9 points in the first half.

But the spark that kept the advantage on Oregon St.'s side came from Malcolm Duvivier, who had a personal 8 point run, including a pair of 3 pointers. Duvivier had never previously been in double figures in his college career, but was there by halftime against Arizona St., with a first half high 11 points.

It was especially huge for the Beavers, given that usual starting 3rd guard Langston Morris-Walker was suspended from the game, after a violation of university rules last Thursday. The duration of Morris-Walker's in-availability is unknown at this point.

As a result, Robinson started a bigger lineup, with Devon Collier in the line-up.

The non-spark that didn't come in the first half, was Jahii Carson, the Sun Devil's leading scorer. The Beaver defense of Carson, shared by Roberto Nelson and Hallice Cooke, limited Carson to just 2 points in the first 18 minutes of the game, though he did come up with 4 more before halftime.

Arizona St. cut the deficit to 3 points with the first 2 baskets after the break, but more importantly, got another foul on Brandt.

It forced Robinson into an offense/defense type of frequent substitution pattern he's often used primarily late in games for almost the entire second half. It would ultimately prove to be the coaching move of the game.

Brandt put up 7 points in less than 3 minutes, and jump started the Oregon St. offense into a lead that stood up almost the entire second half, and grew to 13 points multiple times before the midway mark in the second half.

It could have been an even bigger bulge, but Oregon St. was unable to capitalize on the most bizarre of the several wild exchanges over the course of the afternoon.

After Brandt was tripped while driving right in front of the Oregon St. bench, Arizona St.'s Jonathan Gilling, apparently frustrated by the foul, proceeded to kick Brandt in the head while Brandt was still flat on his front on the floor.

With one official already on the way to the scorer's table to report the initial foul, and another chasing down the loose ball, the only remaining official didn't see the delayed kick, but Robinson did, leaping onto the floor.

The officials did turn to replay, which clearly showed the event (and remarkably enough, was actually shown in the building multiple times), and assessed a technical, but Nelson made only 1 of 2 free throws, and turned the ball over on the ensuing possession with a pushing foul of his own.

Oregon St.'s lead topped out at 14 points on Daniel Gomis' basket with 10 1/2 minutes left to go, but that was the lone bright spot for the Beavers around that part of the game.

Arizona St. was playing for a 3rd seed in next week's Pac-12 Tournament in Las Vegas, and wasn't about to write this one off.

Carson, Gilling, and Bachynski combined to put together an 11-3 run to pull within 57-53 with well over 5 minutes to go, but Oregon St. was back up by 8 points with 2 1/2 minutes to go, after Cooke's bullet pass led to a Brandt dunk.

But the Beavers lost a 7 point lead in the last 2 minutes, with back to back 3 pointers by Gilling, by then the target of essentially all of the Oregon St. fans by that point, and Jermaine Marshall tieing the game with 20 seconds left.

It was a notable basket by Marshall, who is the Sun Devils second leading scorer over the long haul, but was held to just 5 points on the day, less than 1/3 of his average, by the Beaver defense.

Oregon St. still had a chance to win the game in regulation, and Robinson put the ball in Nelson's hands, not a bad idea given that Nelson led the Pac-12 in scoring wire to wire this season, and is in the top 5 all-time in scoring in Oregon St. history.

But Nelson missed what would have been the game winner, and the seniors got to play 5 more minutes in front of the home crowd. 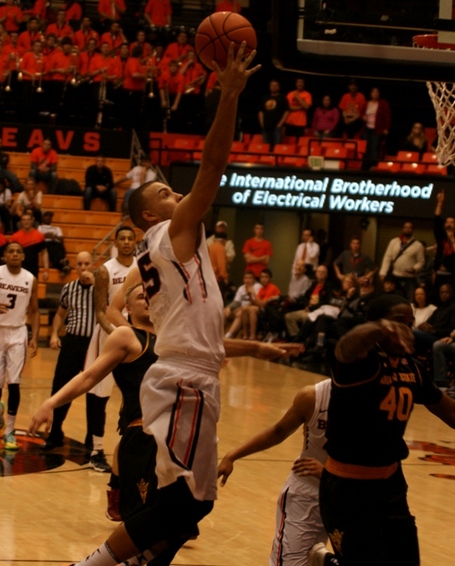 Nelson made amends in overtime though, above, hitting his first shot, and scoring 8 of his 15 points on the day in the extra frame.

The Sun Devils led once in overtime, on back to back baskets by Bachynski after the Beavers had taken an initial lead, but Robinson's foul and minute management paid off, as though Brandt, Nelson, and Moreland all finished with 4 fouls, they were all still on the floor at the end.

Gilling, who had 20 points, on 6 of 7 shooting from 3 point range, as well as Marshall, both fouled out.

And with less than 6 seconds left, Cooke connected on a pair of free throws to make it a 2 possession game, make Shaquielle McKissic's 3 pointer immaterial, and initiate the post-game celebration of the graduating seniors.

Carson finished with a game high 24 points, as well as 7 assists, but McKissic was the only other Sun Devil in double digits besides Carson and Gilling, and he didn't get there until it was too late, as his last second 3 only elevated him to 12 points. 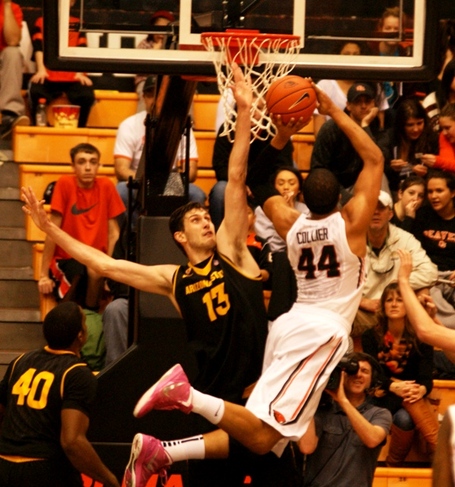 Oregon St. finished the regular season 16-14, and 8-10 in the Pac-12. The Beavers were locked into the 10th seed in the Pac-12 tourney regardless of the outcome of today's games.

Arizona St. ended the regular season 21-10, and 10-8 in conference. The Sun Devils could have wound up the clear 3rd seed in the conference, but losing both games on the Oregon swing at the end of the season left them in a 5 way tie for 3rd with Colorado, Stanford, Oregon, and California.

Arizona St. dodged a bullet though when the Golden Bears beat the Buffs 66-65 in overtime, and the Sun Devils and the Bears were the teams to emerge from the tie-breaking snarl with first round byes.

Oregon St. will face Oregon (22-8, 10-8) at 6 PM Wednesday, after the Ducks upset third ranked and regular season conference champion Arizona, who had the top seed to the conference tournament locked up before the weekend began. The Beavers and Ducks split their regular season games, both winning at home. 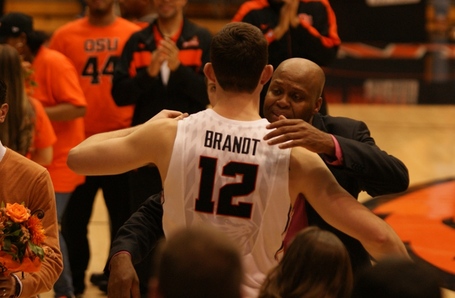 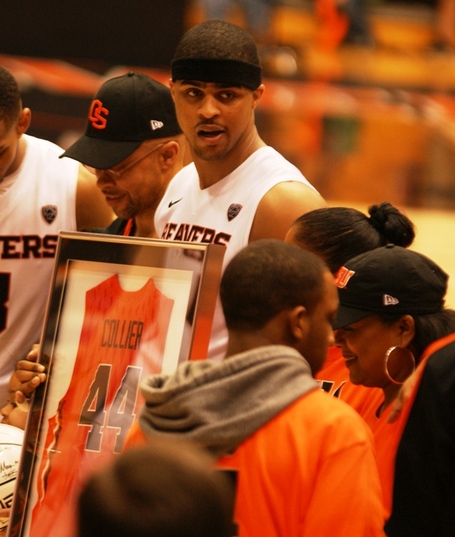 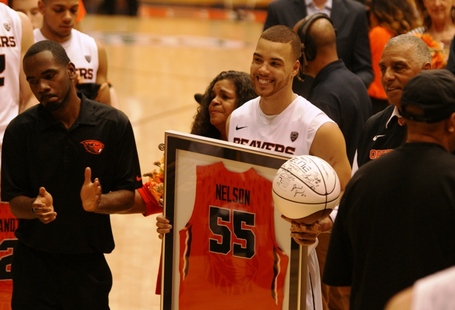 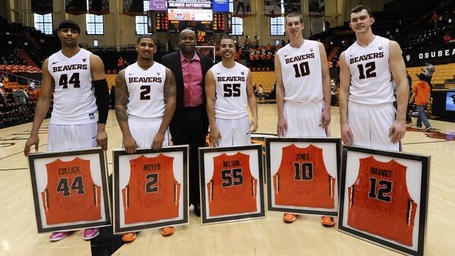