Oregon St. routed #20 Arizona St. 66-43 to claim third place in the Pac-12. The Beavers actually wind up tied with California, but the Bears won the team's only meeting of the season, and as such hold the tie-breaker.

It was senior day for Alyssa Martin, and the rest of the starting lineup gave her a great going away gift in her final game at Gill, as all 4 were in double figures to power the going-away win.

Ruth Hamblin led the way, with 6 points and 6 blocked shots in less than 6 minutes to start the game, on her way to a game high 16 points, and 7 rejections.

Oregon St. overcame a 4 minutes first half scoring drought, breaking out with a 7-0 run, and Sydney Wiese's 3rd 3 pointer put the Beavers ahead 31-23 at the break.

Devan Hunter opened Oregon St.'s first double digit lead of the game to open the second half, and the Beavers never looked back.

It was their defense that did it though, as Arizona St. was held to 1 basket from the floor until almost 3/4 of the way through the second half.

Wiese would end another Oregon St. scoring drought, this one over 3 1/2 minutes in length, with another 3, which gave the Beavers a 36-25 lead, and and also established a new Pac-12 record for 3 pointers.

That record only stood for a few minutes, as Wiese nailed a 5th from behind the arc just past the mid-way mark in the second half, giving her 94, and the Beavers another double digit lead.

The Sun Devils would not get any closer again.

Oregon St. opened 3 different 19 point leads, and after Arizona St. got only their second made field goal of the second half, the Beavers made another 7-0 lead to seal the deal.

The largest lead of the game when Oregon St. went up by 26 points, taking a 66-40 lead, before Arizona St. made only their 4th. basket from the floor of the second half, a 3 pointer, with 2 seconds left. to make the final 66-43, sending the crowd of over 5,200, the largest of the season, home happy.

Deja Mann had 13 to lead Arizona St., one of only 2 Sun Devils in double digits, along with Kelsey Moos' 11.

Oregon St. finished the regular season 21-9, and 13-5 in the Pac-12. The top 4 finish earned a first round bye in next week's Pac-12 Tournament in Seattle. The Beavers will play Friday night at 8:30 PM, against the winner of the Washington-Utah game.

It was the 9th win in a row for the Beavers, tieing for the third longest winning streak in school history. The last time the lady Beavers did that was in 1996. It's also Oregon St.'s first win over a ranked team in 11 years.

The tie for second is also the Beavers' best conference finish ever in the Pac-10/12 era. 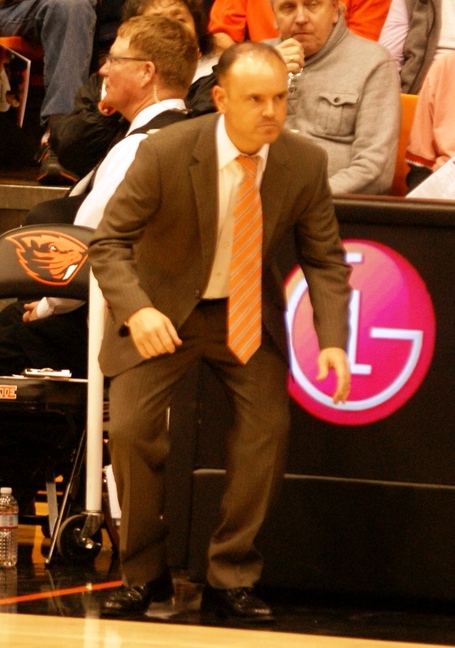 undefeated in the second half of the conference season, winning all 9 games by