Oregon State split its doubleheader with Wright State on Saturday afternoon in Corvallis. After a long day of baseball, the Beavers sustained a late charge from the Raiders to take game one, 6-4, but fell 6-2 in game two.

Share All sharing options for: Beavers Play Lots of Baseball; Win a Game, Lose a Game

Baseball was played on Saturday at Goss Stadium between Oregon State and Wright State, and the two teams had so much fun the first time around, they decided to play a whole extra game! Unfortunately, the second contest didn't go as well as the first one, as the Beavers failed to cash in on most of their opportunities and would eventually fall by four runs.

Joey Hoelzel got the start for the Raiders in game one, and the hosts blistered the senior for 14 hits over 6.1 innings. All 14 came on singles, with right fielder Dylan Davis, below (photo by Andy Wooldridge), leading the way with three hits and two RBI. 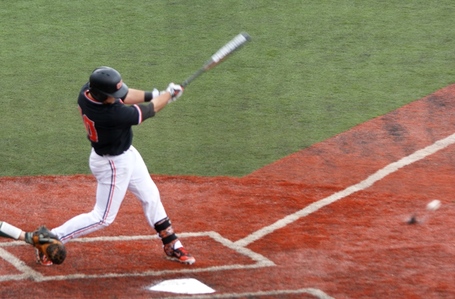 After Wright State tied the game with a sacrifice fly in the sixth, Oregon State started to find its spark. They pulled ahead for good, scoring two runs all with two outs. Southpaw Jace Fry, below (photo by Andy Wooldridge), was masterful, going 8.1 innings and only allowing one earned run on his way to picking up his second win of the season. 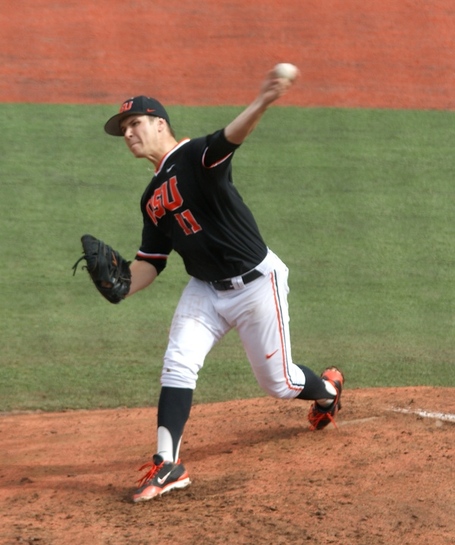 The visitors were able to make the final score a bit more respectable after Fry left the game, scoring three runs to pull within 6-4 before Scott Schultz came in, threw two pitches, and induced a groundout to finish things, picking up his first save of the season in the process. Fry improved to 2-0 on the year, while Hoelzel dropped to 1-2.

Game two was an exercise in frustration for both teams for the first six innings. The pair combined to leave 17 runners on base, with the second and sixth frames providing the biggest gripes from Beaver fans as the bases were left loaded.

The wheels came off in the eighth, when the Raiders scored three runs on top of the 3-2 lead they already held. Freshman reliever Chandler Eden was brought in to try and stop the bleeding, and he promptly threw a wild pitch that scored WSU's sixth and final run.

Schultz took his first loss of the season, dropping to 2-1.

As long as Oregon State takes care of business behind Ben Wetzler's first start of the season tomorrow, we can brush off the loss in game two. Winning the series is the important thing, and two victories to start the weekend puts us in great position to do just that.