With no one withing 5", or about 50 lbs., of Ruth Hamblin's stature, the obvious game plan was for the Beavers to pound the ball inside, and exploit the mismatch.

But the Wildcats packed in their defense, and coupled with a couple of classic Pac-12 bad calls, Hamblin was hampered all night, got in foul trouble earlier than planned in both halves, and wound up with a pedestrian 6 points. 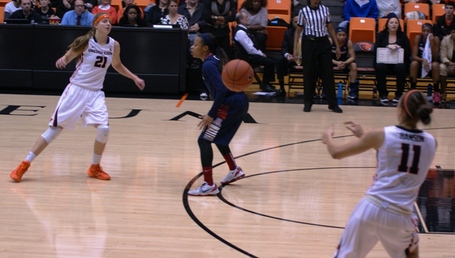 Except that with that much traffic inside, there had to be some space somewhere, and Oregon St. coach Scott Rueck unleashed a fast paced perimeter passing game to find it.

A dozen 3 pointers later, the Beavers had themselves a 30 point blowout win, routing the 'Cats 78-48, for their largest margin of victory in a conference contest in over 11 years, thrilling the crowd of 4,631 that almost half filled Gill. It was the largest home crowd for Oregon St. in over 7 years.

It was essentially over by halftime, by which time Oregon St. had a 14 point, 46-32 lead, which would have almost been enough to win by itself, given that the Beavers held Arizona to only 16 points after the break. 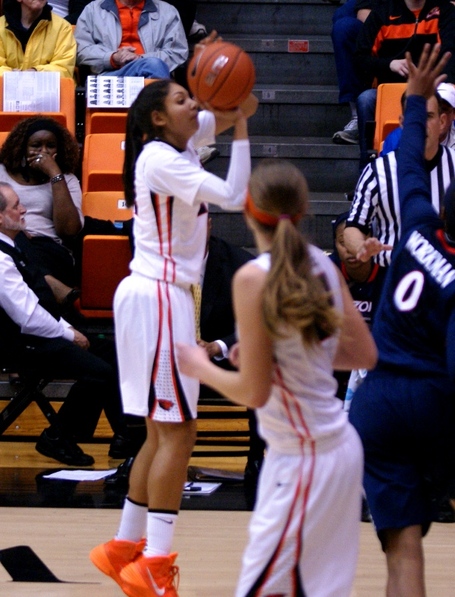 Both senior Alyssa Martin, above, who had her career best game, and Sydney Wiese knocked down 4 from behind the arc, and both finished with 14 points. Martin was especially deadly, shooting 80% from long range. 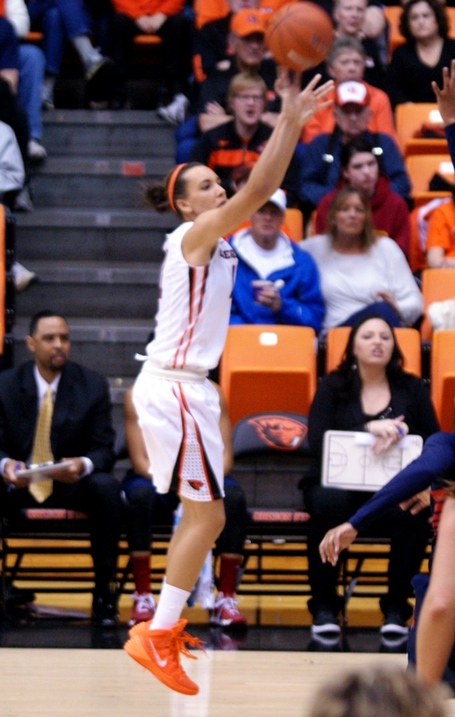 But it was Gabriella Hanson, above, who came off the bench for a game high 16 points, that led everyone.

Ali Gibson also tied her career marks for assists and steals, with 7 and 6.

The win moved Oregon St. into 3rd place in the Pac-12, and set a school record for conference wins, with 12. The victory also locked up a top 4 finish in the conference, earning a first round bye in next week's Pac-12 Tournament in Seattle.

More importantly, also being their 20th win of the season, it achieves what has been the gold standard as far as the NCAA Tournament goes for a team in this conference. No women's team in the history of the Pac-10/12 that has won at least 20 games with at least 12 of them coming in conference has ever been left out of the NCAA tournament.

If the Sun Devils win, they will pull into a 3rd place tie, and have the tie-breaker, a season seep of the series.

If the Beavers win, they claim 3rd place outright. If Washington upsets California Saturday, Oregon St. could tie the Golden Bears, but the Bears hold the tie breaker.

The plan to put a huge crowd in place initially appeared to have failed, as fans were few and far between at the start of the game, but it quickly became apparent that much of Beaver Nation was still working their way across campus from Goss Stadium after the Beavers' 7-0 win in their baseball home opener over Wright St., and by the time the second media time out rolled around, the crowd had grown ten-fold .

With noisy reinforcements in place, the Beavers went on a 21-6 run in 7 minutes, capped by back to back to back 3s by Hanson, Wiese, and Martin. From there, Oregon St. went on to do what good teams are supposed to do to last place teams; blow them off the floor. 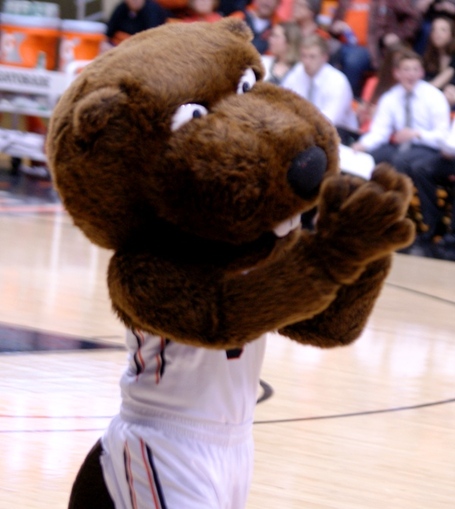 It capped a good night to be a Beaver!