Oregon St. practiced wearing white helmets Monday, and that is something they haven't done in a generation, so it would take some getting used to. And being never before worn head-gear, they also need a little break in before the Beavers break out their new head to toe white look Saturday night in Salt Lake City, against the Utah Utes, in the Pac-12 opener for both teams.

The Beavers also worked on working with the offensive line that they jury-rigged to finish the Hawaii game, after right tackle Grant Enger suffered a knee injury, and then right guard Roman Sapolu a season ending foot injury a play later.

As a result, center Isaac Seumalo moved out to right tackle, with Josh MItchell, who played center for Seumalo in his absence in the season opener, re-assumed that role. Red-shirt freshman Grant Bays rounds out the revised right side of the offensive line.

"We had talked a long time ago about if anything were to ever happen, we could move Isaac out to tackle," Oregon St. offensive line coach Mike Cavanaugh explained.

Gavin Andrews, originally scheduled to be the starting right tackle this year until he contracted mononucleosis, did not have his shoulder pads on Monday, and while he may yet dress or play in Utah, it doesn't look like he's going to be ready for many minutes, so true freshman Sean Harlow will have to stay ready.

In order to avoid having to put Benny the mascot on the depth chart on the o-line, Oregon St. also moved JC DT Devan Filipe across to the offense.

He could be there a while, because Enger's knee injury was diagnosed today as a partially torn MCL. Being a partial tear, its though to be able to heal without surgery, but it could also take more than a couple of weeks to do so.

Saving Benny might be necessary in order to bolster the line-backer corps, which lost starting OLB Michael Doctor for at least 6 to 8 weeks, if not the season, with a surgery requiring foot injury Saturday. Freshman Darrell Songy, who wasn't designated for a red-shirt season so he could play, now can't play for a while either, due to a concussion.

D.J. Alexander did practice, and has already been announced as a starter this week. Caleb Saulo, who had 5 tackles in relief of Doctor against Hawaii, will get the first chance to start in Doctor's place. 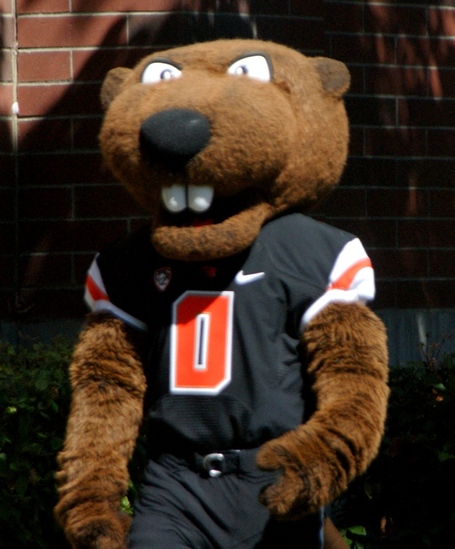 Benny is ready and willing to go in if needed, but the coaches are trying to shuffle the

roster enough to not need him to.

In order to try and avoid having to put Benny on the depth chart, linebacker coach Trent Bray also got approval from defensive coordinator Mark Banker and head coach Mike Riley to move redshirt freshman Cyril Noland-Lewis from safety to linebacker.

That will in turn affect the depth chart in the secondary, as Noland-Lewis was listed as Ryan Murphy's backup at one of the safety positions going into the Hawaii game. Steven Christian, who played a fair amount in the nickel package in the opener against Eastern Washington, but less so against Hawaii, will likely elevate into the slot.

All the shuffling will likely keep the Oregon St. coverage packages relatively simplified, something Banker felt was a factor in the Beavers' improved defensive performance against Hawaii over their melt down in the opener.

We'll see if Utah sophomore Travis Wilson will be able to find more success than he did last year against the shuffled Oregon St. defensive deck, when the Beavers claimed a 21-7 win.