OSU vs Colorado: Beavs find their game in the wind and rain to win 44 to 17

Oregon State football finally finds more of its full stride on both sides of the ball as Sean Mannion has a record day, breaking the OSU single game record for touchdowns, and the defense steps up to control their second conference game of the season.

Share All sharing options for: OSU vs Colorado: Beavs find their game in the wind and rain to win 44 to 17

The first half was not a pretty affair with the weather swirling and both teams making some key back-and-forth mistakes.  One thing impressive is that the Oregon State defense played a very solid half, and indeed at times bailing out the offense's mistakes.

The first quarter saw what looked to be a bit of a struggling OSU passing offense in the weather conditions, including a rare ball through the hands of sure-hands Richard Mullaney for a Colorado INT that set up the Buffaloes deep into OSU territory.   Colorado was able to get the ball to a first and goal situation with a run by Connor Wood, but the Beavs defense played well and held Colorado to a 19 yard field goal.  The Oregon State offense was able to move the ball at times, with a lot of help from Brandin Cooks (168 yards on 9 catches for the game), first scoring on a 36 yard Trevor Romaine field goal. 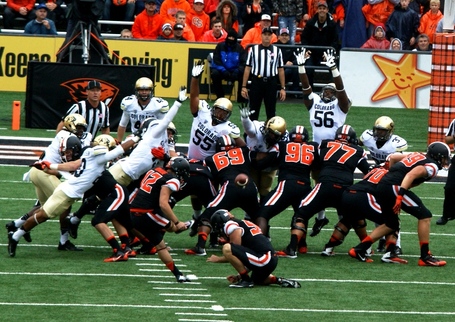 Oregon State finally really broke through at the end of the 1st quarter after a beautiful Cooks catch and then fly-sweep run to set up the Beavs for a Sean Mannion to Caleb Smith three yard touchdown pass play.

The second quarter looked to be one that the elements and the OSU defense were the main highlights.   The Beavs defense played well in coverage and against the Colorado running game.   Even though the Buffaloes did themselves no favors by racking up 59 yards on penalties, the Oregon State defense looked sharp and in control.   Mannion and company though continued to struggle to really turn it all up a notch, especially in establishing any type of running game and also with missed catches (which obviously was affecting Coach Riley's mood as seen with his reaction on a Caleb Smith drop).

Oregon State to its credit though held strong and kept its head, and the offense started to make some progress running the ball at the end of the half.  Most importantly the Beavs passing game started to find more of its stride, especially highlighted by Cooks spectacular catch where he was more in the defensive position to take the ball away from the Colorado defensive back (Cooks ended the half with 152 yards on seven catches and one touchdown).  The catch and field position was negated though as Mannion was sacked and lost the football.   But the OSU defense got the offense the ball back with just enough time to drive the field, make a key fourth down conversion thanks to a nice over-the-middle catch by Richard Mullaney, and have Mannion find Cooks in the endzone to go up 17 to 3 at the half.

At the half the Beavs had 14 first downs to Colorado's 4, though only had 38 rushing yards to Colorado's 90, but did dominate the passing numbers with 247 yards to the Buffaloes' 28.  It was a good half for sure, but one that just could have been a lot better if the Beavs had not a couple bad bounces of the ball happen.

The third quarter though was owned by Oregon State, the offense started to click and the defense continued its strong play.  Additionally the Beavs special teams forced two turnovers, including a fumble recovery by Trevor Romaine that seemed to get him fired up enough to start making tackles too! 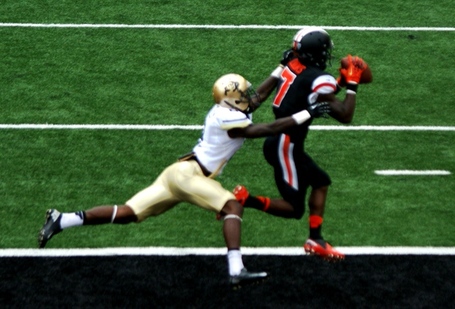 Oregon State scored on the opening drive of the second half on a 22 yard TD pass to Brandin Cooks, above, and then a bit later on a Terron Ward 42 yard receiving TD, below. 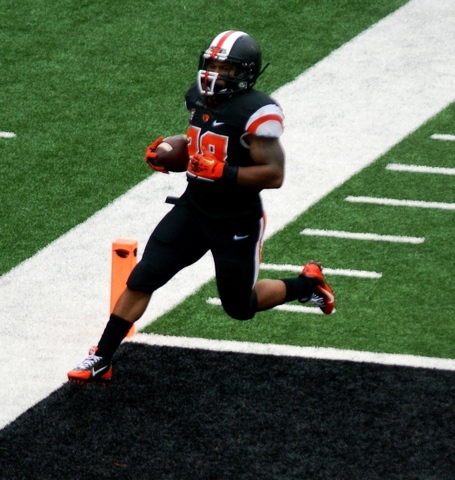 Basically it could have been worse if OSU was able to take more advantage of turnovers and good overall field position, such as the Beavs were not able to capitalize on the kickoff fumble and had another drive was stopped on downs at the Colorado nine yard line.  But all-in-all there was not a lot to complain about as OSU took control of the game.

In the fourth things went a bit sloppy for the Beavs, who seemed a bit resting on their previous solid play laurels.  The defense had some penalties and looked a little more confused to start the quarter, all of which led to the Buffaloes first touchdown (along with a 2-point conversion) of the game with a Connor Wood to Tyler McCulloch 24 yard pass.   OSU and Ward did start to establish some rushing game after Colorado went for the on-sides kick and OSU recovered, but the drive stalled and Romaine looked to be trying a little too hard to finesse the field goal attempt with the swirling wind and it stayed out to the right.  The drive though was enough for the defense to gather itself to pick off Colorado QB at the 11 yard line (Ryan Murphy), all of which allowing Sean Mannion to throw his OSU record sixth TD (single game touchdown record) to Connor Hamlett, below, to go up 44 to 11. 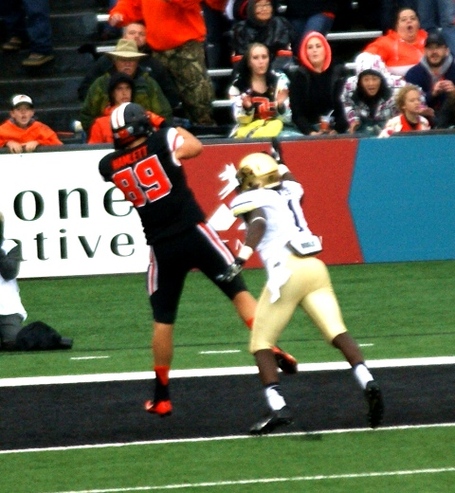 After this score Cody Vaz and Chris Brown took over the offense to finish the game for the OSU offense; and Colorado scored with 13 seconds remaining on a slope play drive.

The game at times was not always a thing of beauty and weather did not help, but the Beavs ended up winning in a solid and grinding fashion.   The offense took a little while to find its stride, but once they did it was the same old deal we have seen previously with Mannion absolutely picking apart another team's secondary.   The defense also stepped up big time.  Sure the wind was tough for the Colorado passing game, but the Beavs played aggressive and smart.  One thing that was impressive about the defensive performance was its solid stay in place tackling combined with more speed and solid East-to-West tackling.

In the end one has to think that Colorado will find its game at times this season still, and they look to have something in the making for the future, but today it was obvious that the Buffaloes had too much of a break from play and ran into a deeper and more athletic Oregon State. 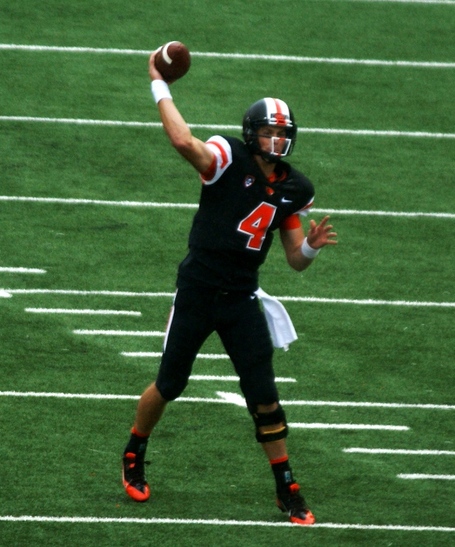 "I don't really consider myself a big stat guy...."-Sean Mannion in his post-game interview when asked about what it means to break the single school record with six touchdowns.

Oregon State now goes into a bye week to see if they can get even more deep by getting game healthy some of their injured players before they head to a very interesting and tough road game in Pullman against the Washington State Cougars on October 12.  And the Beavs will be taking with them their most impressive all-around win along with a 4 and 1 overall and 2 and 0 conference record.