Oregon St. dug themselves into a huge hole in the first half, and San Diego St. threw everything they had at the Beavers. But Sean Mannion directed a pair of 4th quarter touchdown drives, and then Steven Nelson came up with the game winning pick-6, and Oregon St. pulled out another wild one, downing San Diego St. 34-30 with a 20 point 4th quarter. It was the 100th win of the century for the Beavers, and easily one of the wildest 10.

11 first half penalties on Oregon St., including 5 false starts, and repeated problems with maintaining lane discipline, or tackling when they did have a chance to, combined to help create a 24-14 halftime deficit for the Beavers. 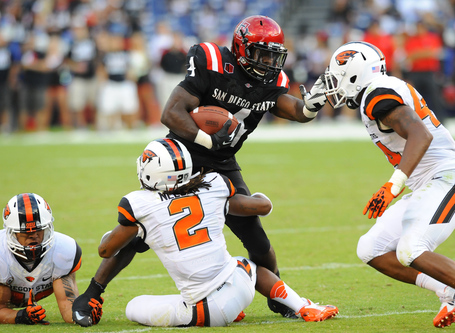 San Diego St.'s hard running running back Adam Muema, above, and quarterback Quinn Kaehler, who was making his first ever start at the FBS level, had a lot to do with it too, as the Aztecs out-rushed the Beavers, and Kaehler, below, hung in in the gun fight with Mannion pretty well in the early going. 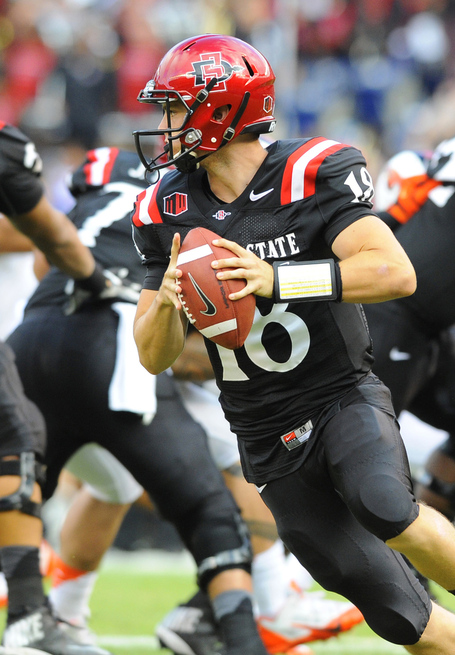 The false start problem was compounded by the loss of center Josh Mitchell with a left ankle injury in the second quarter that led to 5 different offensive line alignments in a matter of minutes, as Oregon St. offensive line coach Mike Cavanaugh scrambled to find the right combination, with freshman Sean Harlow being thrown into the fray.

Mitchell tried to come back, but just couldn't go, and Isaac Seumalo had to move back to center, Grant Bays out to right tackle, and Harlow who was initially at tackle, shifted to right guard.

The upheaval led to Mannion suffering 5 consecutive incompletions at one point, his longest such drought of the season, though 3 were dropped.

Once the Beavers settled down after halftime, the penalty problem went away, with only 2 flags flying in the second half, and the Oregon St. defense finally settled down as well.

But a pair of fumbles led to San Diego St. field goals that ate up the 3rd quarter before Oregon St. could get a rally going, and then seemed to make the mountain too tall to climb.

Mannion had answered the Aztec's first second half field goal by conducting a 65 yard scoring drive, completing 7 consecutive passes, including the 2 yarder to Kevin Cummings for the touchdown that pulled Oregon St. within 27-21. It was the 3rd 3rd down on the drive Mannion converted by completing a pass to Cummings.

Oregon St. promptly stopped the Aztecs, but Brandin Cooks then fumbled after catching a bubble screen, and San Diego St. ate up over 4 1/2 minutes before making it a 2 score game with just over 5 minutes left, on Wes Feer's 3rd field goal of the game.

Undaunted, Mannion mounted an 81 yard touchdown drive, capped by a 10 yard touchdown toss to Terron Ward, that cut the deficit to 30-28, though with only 2:40 left.

San Diego St.'s inexperience then came into play. A false start, and Muema being thrown for a 4 yard loss by Jabral Johnson put Kaehler in position to need to complete a pass for a first down to keep Mannion off the field.

He promptly overthrew everyone, and Nelson, who had 2 crucial second half interceptions last week at Utah, and 1 against Hawaii, swooped in for the pick-6 to put the Beavers ahead for the first time since Kellen Klute's first quarter touchdown catch from Mannion (a lead that it took Kaehler 1 play to erase, with an 80 yard touchdown throw to Colin Lockett).

With 2 1/2 minutes left, the game was still far from over though, as the 2 point conversion attempt pass was deflected, and a touchdown would still win the game for the Aztecs.

A sack by D.J. Alexander, the 5th of the night recorded on Kaehler by the Beaver defense, further compounded the problem for the Aztecs, but the last penalty of the night, a hit above the shoulders on Kaehler by Devon Kell, when Kell initially hit Kaehler square in the chest, but then had his helmet slide up and hit Kaehler on the side of the facemask, almost became a game changer on a night of game changers, when Oregon St. had appeared to have ended the Aztec's last drive. 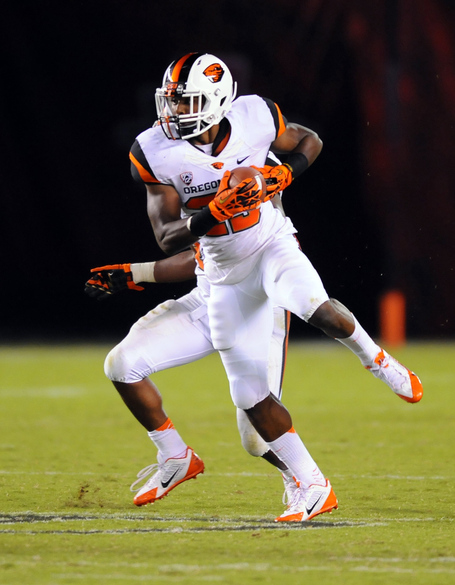 But a deflected pass that Ryan Murphy picked off, above, immediately erased that.

The Beavers still weren't out of the woods though, needing a first down to be able run the clock out. Missing Storm Woods, who suffered a concussion against Utah, and also fullback Tyler Anderson, who had to be ruled out after warmups with a pulled ham string, Oregon St. was at that point -1 yards rushing for the game, with a  sack of Mannion figured in. Faced with 3rd and 9, Oregon St. head coach Mike Riley dialed up the fly sweep, and Cooks picked up 12 yards for the first down that nailed down the second comeback Beaver win in 2 weeks.

"It was a good time to run it (the fly sweep)," Riley, the master of the obvious understatement, said.

"It was quite a game," Riley added. "It was quite amazing. I'll tell you what, I'm proud of them for never quitting. It was just one of those nights when we weren't as good as we could have been, but we kept fighting, and found a way to win it." 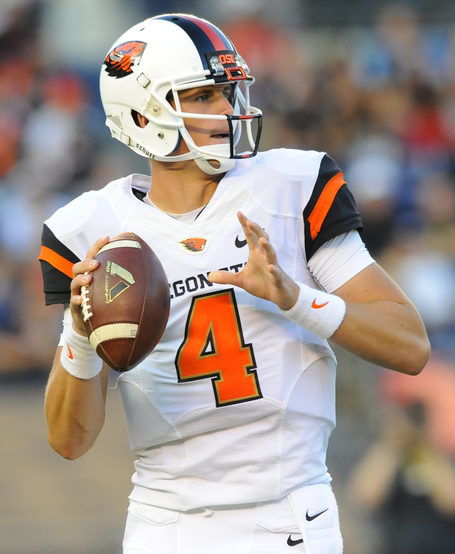 Despite the line shakeup in front of him, Mannion, above, still completed 38 of 55 passes, just shy of 70%, for 367 yards and 3 touchdowns, and again, no interceptions.

"When you look at all the circumstances that affected this team, it was a phenomenal win," Riley felt.

Cooks, despite the fumble and a botched punt that forced a Beaver drive to start at their own 2 yard line, and a pair of first half drops, still had a career night. In addition to the game sealing sweep, Cooks had an Oregon St. single game record tieing 14 catches, including 8 in the first half, for 144 yards.

Kaehler completed 16 of 25 passes, for 251 yards, and 2 touchdowns, in his first start, but suffered the 2 interceptions in his last 5 throws.

Oregon St. improved to 3-1 for the season, before heading for some more "In N Out" Burgers, and then home, for next week's Pac-12 home opener at noon against Colorado (2-0).

San Diego St. dropped to 0-3. It was an especially disappointing loss for the Aztecs, who thought until the last minutes that they had broken through, after winning only 1 of their last 21 games (a win over Washington St.) against Pac-10/12 opponents.

Clearly, Oregon St. was largely unsuccessful in finding a rushing game, and though the Beavers did get a couple of key runs, the inability to pick up a 2nd quarter 4th and 1 at midfield underscored how much this is a Mannion or bust offense.

And while the late 4th quarter heroics by the defense won the game, it was another game where the Oregon St. defense wasn't mentally prepared to play. The problem isn't with base alignments that have no chance, as was the case a couple of years ago, and there's no lack of enthusiasm or effort. And its not as though there aren't personnel package changes and adjustments being made; there were plenty of both again tonight.

But long stretches of the game are plagued by over-rotating defenses where players have zero lane discipline, and if anything, too much effort and enthusiasm, which is resulting in players running them self out of position, giving opponents all kinds of opportunities for big plays.

The big plays and the wins prove Oregon St. can play at a high level defensively. And it's clear that Mannion's ability to mount rally after rally has translated to the defense as well; they realize that no matter what mistakes are made, they always have a chance to make amends because Mannion will keep them in the game.

But eventually, Riley and defensive coordinator Mark Banker are going to have to figure out how to avoid more nights where they "aren't as good as they could have been."

It was a good night to be a Beaver, but it surely won't be too many more times, given what we saw today from Stanford and Washington, or the USC defense, or even Washington St., for that matter.