Mannion, Romaine Pac-12 Players Of The Week, Woods Out With Concussion

Share All sharing options for: Mannion, Romaine Pac-12 Players Of The Week, Woods Out With Concussion

There was lots of discussion about all manner of issues from Saturday's college football action, involving Oregon St. and others, as expected today, and quite a bit of news too.

Sean Mannion was named the Pac-12 Offensive Player of the Week, after throwing for a career high in passing yards to lead Oregon St.'s 51-48 overtime win at Utah. 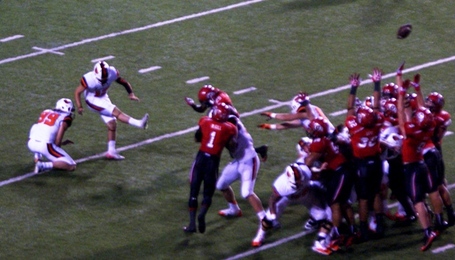 The Beavers' place kicker Trevor Romaine, above, was named the Pac-12 Special Teams Player of the Week as well, after being perfect on 3 field goals, including a career long 49 yarder, as well a being a perfect 4 of 4 on extra points. Romaine also had solid game kicking off, with 5 touchbacks, and a special teams tackle to boot.

On the injury front, Oregon St. head coach Mike Riley indicated that he didn't expect Storm Woods to play this week at San Diego St., after suffering the concussion that resulted in an ambulance ride to the hospital during Saturday night's game. Woods was released from the hospital early Sunday morning, and returned with the team to Corvallis, after getting an ovation from his team mates when he walked onto the airplane. 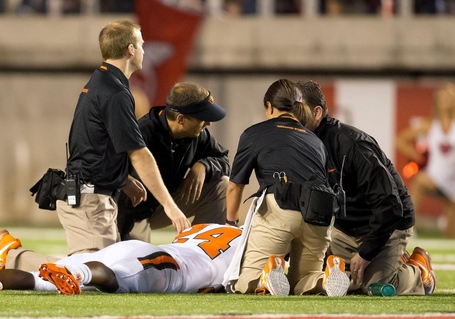 Woods, above being attended to by OSU trainers, was injured making a diving block on a blitzing Ute on the play that resulted in a pass interference call that prevented a potential touchdown throw to Richard Mullaney. Woods will have to be symptom free for 5 days before he will be cleared to return to practice or game action.

Terron Ward will start against the Aztecs in Woods' absence. Chris Brown, who has been absent from the action early in the season after suffering a foot injury late in pre-season practices, appears fully recovered, and took a number of snaps in practice today. Riley anticipates Brown being the primary backup for Ward.

Jovan Stevenson, whom Riley decided to leave behind in Corvallis this past weekend after he was suspended for the first half of the game by the Pac-12 for a late hit in the Hawaii game, will also be available in San Diego, but running backs coach Chris Brasfield told reporters after practices that he isn't sure if Stevenson will get any snaps.

The only other significant injury from the Utah game expected to have a lingering effect was to DT Siale Hautau, who is doubtful for the San Diego St. game with a strained triceps.

DT Edwin Delva, who also had to leave the Utah game in the 4th quarter, was back practicing today.

So far though, Gavin Andrews, who has missed the first 3 games with mononucleosis, isn't back practicing yet. He was tested by the doctors again today, and even once cleared, he's going to likely need some time to get back into game shape.

It will still be a while before Michael Doctor can return, or even make a final decision on whether he will, but it was encouraging that a week after surgery to put a plate in his foot, he has turned in his crutches, and was at practice today.

Return to Corvallis will be a Noon affair

The networks made their selections and declinations for Sept. 28 today, and as we reported earlier, Oregon St.'s first home Pac-12 game against Colorado will be a Noon game, relegated to the Pac-12 channel.

On a weekend when all the other Pac-12 teams besides Oregon St. and Utah were involved in non-conference games, and all of them who played won except Cal, as expected. As a result, the conference again has 5 teams ranked this week. Washington and UCLA both made moves upward with strong road wins, and Oregon and Stanford held steady in the #2 and #5 spots.

UCLA had the big win of the day, a 41-21 come from behind win after being 18 points down late in the first half, at Nebraska that the Bruins dedicated to WR Nick Pasquale, who was killed in an accident the previous Sunday.

Colorado's game against Fresno St. was postponed/cancelled (a makeup date other than championship Saturday, when at least the Bulldogs may be otherwise occupied, is going to be difficult to find) due to flooding in the Boulder area, including on the Buff's campus. As a result, Colorado will be coming off a 3 week, double bye layoff when they come to Corvallis.

But it was Arizona St.'s win over Wisconsin that produced the most conversation, after the Pac-12 officiating crew "failed to move with appropriate urgency to clearly communicate that the ball was to be spotted so play could resume promptly" after Badger quarterback quarterback Joel Stave ran to the left, started to put his knee down, and placed the ball on the ground, in order to set up an end of game field goal attempt.

Mismanaged game management resulted in the clock running out, and Arizona St. booked the 32-30 win, which propelled the Sun Devils into the top 25 (both the AP poll and the Coaches' Sports Information Directors' polls placed them at #23) and ironically, avenged a 2010 defeat in Madison, when an inept (or worse) non-call by Big 10 officials played a key role in that outcome.

Today, the Pac-12 conference reprimanded and sanctioned the crew for Saturday night's fiasco.

The release as is typical doesn't give any specifics, compounding the conference's credibility problem further. It's worth noting that this was the crew headed by Jack Folliard, who is from Portland, OR, and is also the head of Oregon high school football officials. Pac-12 fans may recall is was Folliard who headed the crew that presided over the on-field riot that occurred in Tucson 2 seasons ago in the UCLA-Arizona game.

At least Pac-12 Commissioner Larry Scott wisely passed up the opportunity to point out to Big-10 Commissioner Jim Delaney "Our guys can homer better than your guys."

Overall, Pac-12 officiating has seemed to have made some progress this season, but this latest episode of not only messing up a crucial call, and then not correcting it, has probably wiped out all the progress made so far this year in the national perception.

At least today provided plenty of other things to talk about besides bad defensive coverage reads and decisions that made another Oregon St. opponent's mobile quarterback look like a Heisman Trophy contender.