"In Sean We Trust"

Share All sharing options for: "In Sean We Trust"

In a nearly 4 hour long fire fight, it was Sean Mannion that had the hotest trigger finger once again, and Oregon St. got out of Salt Lake City with a win and a burger to go well after midnight.

Mannion was only 27 of 44, and a couple of off-target throws that resulted in the Beavers having to settle for Trevor Romaine field goals when touchdowns were there for the taking left Utah close enough to necessitate more Mannion magic in overtime. But Mannion was only sacked once, and did throw for a career high 443 yards and 5 touchdowns, and critically, zero interceptions. That last number was the one thing Utah quarterback Travis Wilson couldn't match, and it ultimately cost the Utes the game.

In a night when the number of people ready for mental health treatment had to approximate the attendance total of 45,221 at Rice-Eccles, the one who has to be the most emotionally and mentally shredded has to be Oregon St. defensive coordinator Mark Banker though.

The Oregon St. defense was tremendous early on, forcing 3 consecutive 3 and punts in the first quarter, and held Utah to only 10 first half points. The Utes managed only 9 rushing yards in the first half.

But after a second half opening pick-6 by Sean Martin that opened a 17 point, 27-10 lead, completely fell apart, as halftime adjustments by Utah coach Kyle Whittingham and offensive co-coordinator Dennis Erickson took full effect, and advantage of the absence of Oregon St. linebacker Michael Doctor.

Despite the return of D.J. Alexander, lacking speed and experience contributed to the standard storyline for Banker's defenses when mobile and creative quarterbacks are encountered. 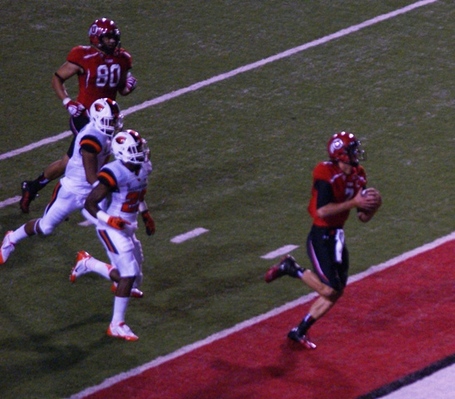 Wilson, above, ran wild, statistically and figuratively, rushing for 142 yards and 3 touchdowns to go along with 279 yards passing, and 2 more scores.

That opened things up for James Poole as well, who finished with 117 yards and a touchdown on 25 carries.

And with a roaring crowd urging them on, the Utes came storming back, eventually taking the lead 38-37 with 4:25 to go.

And that despite a pair of interceptions by Steven Nelson.

Mannion answered with a 79 yard drive, capped by Brandin Cooks' second touchdown of the night, and as crucially, a 2 point conversion completion to Connor Hamlett that meant overtime instead of a heart-stopping loss when Wilson put together his own 75 yard scoring drive, capped appropriately by his 3rd rushing score of the night.

But just as the voodoo Banker dolls were being handed out among the small but vocal contingent of Oregon St. boosters, the Beaver defense dug in and came up with the stop that forced a Utah field goal, and opened the door for Mannion to throw 3 more completions, the last one low, but not quite low enough to be picked off by Utah's Michael Walker, and not too low for Cooks' 3rd touchdown, and a share of first place in the Pac-12 race. 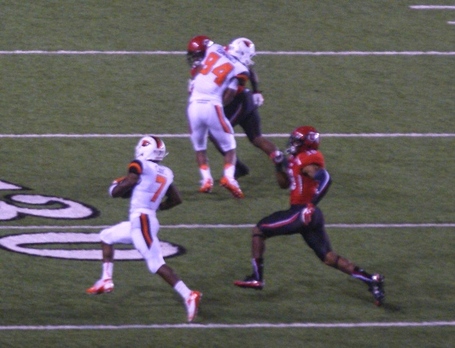 Cooks, above, had another extraordinary evening, with 9 catches for 210 yards, and the 3 scores. The other pleasant surprise of the evening for Oregon St. was Richard Mullaney, below, who had his career best game, with 7 catches for 142 yards and a touchdown. 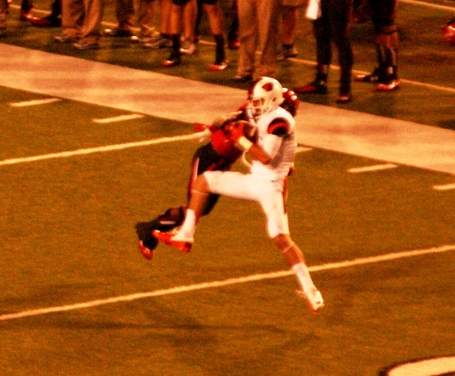 Much of it came in the first half, and Whittingham deserves credit for a defensive halftime adjustment that slowed Mullaney considerably after the break.

And the Beavers needed every bit of it to offset the 101 yards that Utah's Dres Anderson amassed on just 4 catches. Almost lost in the onslaught of action though was a critical communication breakdown between Anderson and Wilson that led to a couple of curious non-connections in the first half, which helped keep Utah out of the end zone. And as the game wore on, every stop of any magnitude would come to loom large.

Also of note, while the Oregon St. defense was losing containment on a consistent basis in the second half on Wilson, they did shackle Sean Fitzgerald, limiting one of Utah's keys to the game, to only 1 catch on the night.

Wild play of the night award has to go to Oregon St. head coach Mike Riley though, for his post time-out 4th down call for a pitch back to Mannion, who of course looked to Cooks for a 48 yard completion.

The decision to go with Nelson more in the secondary was notable as well, as the inexperienced (at the FBS level) transfer was a party to a couple of badly blown coverages. But no one on the field but Nelson could have come up with the interceptions he grabbed, both of which were a product of sheer speed. It's the risk you take to put speed on the field. A risk that ultimately paid off for Banker and Riley.

Disappointment of the night had to be Oregon St.'s struggling to run the ball much of the evening, though in fairness, one of the first half scores came as a result of another huge 45 yard pass play to Cooks out of play action, shortly after consecutive runs by Tyler Anderson, Storm Woods, and Terron Ward that facilitated it.

We'll have more analysis of one of the wild ones early in the week, and hopefully, good news about the condition of Woods, who had to take a trip to the local hospital after lying face down for 8 minutes late in the game, the result of an inadvertent kick in the head while blocking.

A raised finger as he was being loaded into the ambulance was a positive sign, and news of pulling out the win in overtime doubtless took some of the sting out of the hit.

For now though, Oregon St. has its first win in Salt Lake City since 1968, its time for the long trip home, and its a good night to be a Beaver!