DJ Alexander has wrapped up the number four spot in the countdown.

DJ Alexander is a starting linebacker for Oregon State and is one of the most athletic players on the team. Alexander does not have great size at 6' 2" and 229 lbs, but the athletic ability covers for any deficiencies there. Number wise Alexander is not as impressive, his 58 tackles was fifth on the team and his 33 solo tackles was sixth. This is where the numbers skew the actual value of players though. Alexander is as valuable of a player as any on the Beavers. He is irreplaceable, with his athletic ability he is able to cover a ton of ground and make the play swiftly after diagnosing the play.

This ability is most clearly shown from the Wisconsin game which can be found in the video below which can be seen at 0:09 and 0:50 (I recommend the whole video though).

It is much easier to see at the 50 second mark where Alexander has recognized the screen play and has charged at Montee Ball like a missile. Once he arrives to Ball he wraps up well and brings him down to the ground. That play almost reminds me of Troy Polamalu when he accelerates to take down ball carriers. That is a lofty comparison certainly, but its the same sort of athletic play that is stunning to see. As the season wore on Alexander started to pick up injuries which hampered his ability to tackle and he started to miss some tackles in space. This cost the defense considerably and the Beavs were not nearly as good on defense after this occurred. It showed how valuable he was as well, where Reuben Robinson could not fill in for him for extended periods because the dropoff between the two was just too high. 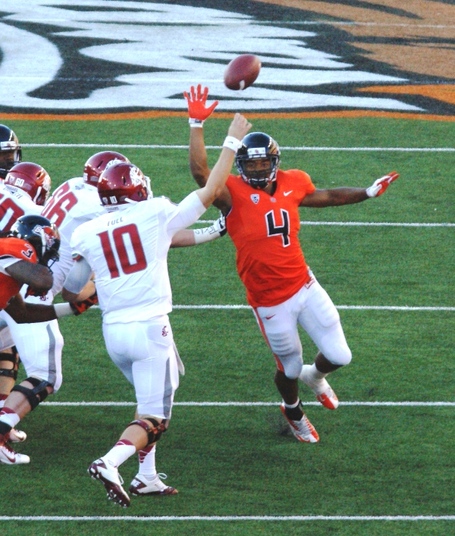 Alexander is already a great linebacker and is one of the key components to the Beaver defense. One element that does get me excited for his potential though is his speed.

Alexander has been a fine player for Oregon State and when healthy should pair with Michael Doctor to be a terrific tackling tandem. If Alexander can stay injury free he will be one of the best Beaver players this season.