The shoulder pads went on for day 3 of Oregon St.'s preparation for the 2013 football season, and the hitting began. Temperatures were also down 25 degrees today, much more conducive to the contact the players seemed eager for.

"It was pretty clean," Head Coach Mike Riley felt. "Usually you get some stupid stuff, but it was good."

And counter to what usually happens early in the season, the Oregon St. offense appears to be ahead of the defense. There were a couple of interceptions, including one by reserve CB Larry Scott, which was intended for Obum Gwacham, and prompted the WR intent on stopping the defender to grab Scott by the shorts, pulling them as well as Scott down, and providing a moment of comedic relief. 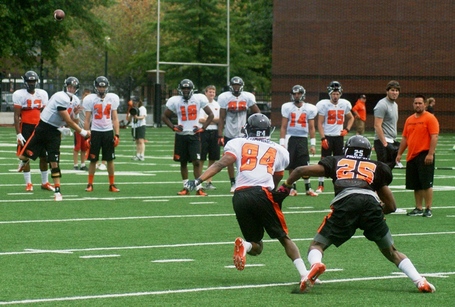 The offensive advantages were most pronounced on the more complex plays, where the defense had to deal with receivers in traffic, and decide whether to play through or switch, and then actually execute that plan, and also on change of direction routes with sudden, sharp cuts.

The hit of the day came from a surprising source. And CB Sean Martin can take some solace in the knowledge that if Brandin Cooks delivers the shot he did on one play today where he did, it will result in a penalty (contact way too far down field) being called. But Martin still had to pick himself up after landing hard and square on the number on his back.

Secondary coach Rod Perry probably felt a little better after Rashaad Reynolds not only hung with Cooks on a go route, but broke up an on-the-money throw. Certainly better than a little earlier when Caleb Smith found space right down the middle of the field when the linebackers released the lumbering TE with both safeties outside the hash marks. It looked like a wide open freeway.

But early on, today's coordination mistakes aren't all bad, as they provided material for answering the question "What did we miss?"

Health wise, the Beavers remain in good shape. FB Tyler Anderson, who is coming back from an ACL injury that ended last season early for him, served as a ball boy today, with his left knee wrapped in ice, but the only one on the team that's "out" is safety Kendall Hill, who suffered a knee injury in the spring.

And it was announced that safety Steven Christian could return to practice next week. Christian contracted mononucleosis last month. So far, Christian has been limited to jogging around the practice field, and watching drills, and is trying to re-gain the 15 pounds he put on his frame since last season that he lost after getting ill.

As far as players not on hand, Riley said he has received a little more information about the three junior college defensive linemen, Kyle Peko, Charlie Tuaau, and Lyndon Tulimasealii, who haven't been cleared academically, but Riley said there's still no decision on any of the three. Riley did say he's hoping to know by early next week, if not the end of this week.

It might be a little while longer before Riley settles on a quarterback, though, and neither Sean Mannion nor Cody Vaz did much today to make the choice any easier. Mannion was back working mostly with the "1s" today, but Vaz impressed with velocity on his out routes, which became an issue last season after his ankle injury, suffered at Stanford.

The Beavers continue to look like a 3 back team, with both Terron Ward and Chris Brown looking like they should get their fair share of snaps in support of Storm Woods. Woods continues to look good as a receiving option out of the backfield, and not just as a check-down. Expect to see Riley run Woods as the primary target on a regular basis this season.

The offensive line in their first action against the defense looked like the better Mike Cavanaugh lines have tended too; a lot of large bodies with narrow gaps between them, forming a wall to throw from behind. Losing gap control wasn't a problem, at least today. 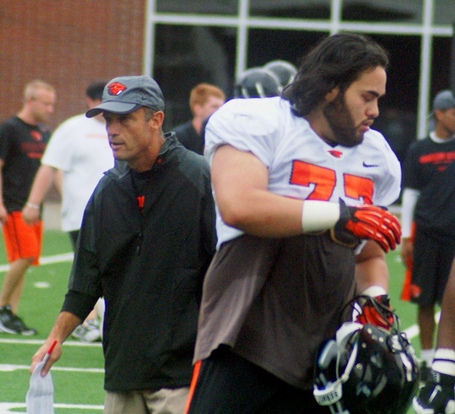 One thing is clear, the much discussed new facilities at the University of Oregon, which includes a barber shop, has afforded the Duck an advantage. Tackle Michael Philipp, above, clearly hasn't seen the inside of a barber shop recently. (Coach Riley appears concerned that the season opening game on Aug. 31 against Eastern Washington may be moved from the Pac-12 Network to Animal Planet as a result.)

Tomorrow will see another session with shoulder pads, before full pads, and even more contact, comes on Friday and Saturday. Riley also indicated he will probably announce dates for scrimmages early next week.