Share All sharing options for: Popsicle Day At Oregon St.

It was even hotter than opening day was at football practice for Oregon St. as they prepare for the 2013 football season, and the season opener against Eastern Washington on Sat. Aug. 31 at 3 PM, so with temperatures into the 90s, Coach Mike Riley broke out the popsicles at practice.

Victor Bolden, Freshman WR had no clue how we do it at Oregon State! Hot day = Popsicles #GoBeavs pic.twitter.com/wVp2yK7fAT

Speaking of Bolden, keep an eye on the diminutive freshman, who is generously listed as 5'9" & 165 lbs. He's both fast and quick, and is quickly impressing, with well-run routes and good footwork. He doesn't look like someone who has only worked out 2 times with this team.

With less media on hand, and a lot fewer fans watching, day 2 of pre-season preparation saw a lot of time spent working on details, installing plays (some of which worked better than others, but that's ok at this point in preparations), and introducing the newcomers to the Oregon St. system.

"It went like it should," Riley said. There's nothing enlightening or earth-shattering. "We're doing a lot of installation of plays. There's some new stuff, but it's mostly stuff we've done."

There were no notable new injuries, and DT Siale Hautau, who left yesterday's practice with a dinged ankle, returned to practice today. X-rays were negative, 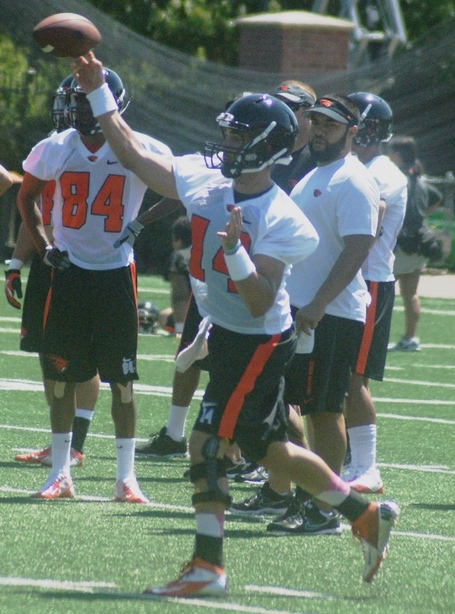 Cody Vaz, above, got some work with with the 1s today, particularly when the Beavers were working on running plays. And no, Coach Riley did not have anything new to say on the subject. 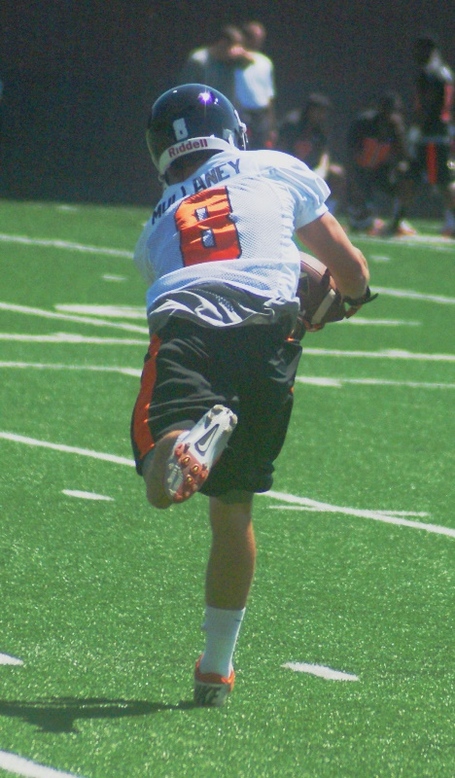 Richard Mullaney, above, who sat out spring ball rehabbing, seems to be getting his sea legs back under him, and was moving well today.

Meanwhile, the turn at Reser Stadium has had the new-look stitched in (the logo was painted in place for the spring Scrimmage, but has a more permanent treatment now, and the new font has been applied, with "OREGON STATE" in the southeast (scoreboard) end zone, above, and "BEAVERS" on the northwest (Valley Football Center) end, below.

Practice continues daily at 11 AM, with the public welcome to watch. Full pads will go on for Friday and Saturday morning's sessions.