The top running back for the Beavs sprints into the countdown at number 5.

Storm Woods was the top rusher for the Beavs last season, with Terron Ward being the closest at 430 yards. The rushing attack was not nearly as productive as Beaver fans would have hoped, but it became just enough of a threat to open up the passing game. Woods personally accounted for 47.4% of the rushing yards and was the 4th leading receiver behind Markus Wheaton, Brandin Cooks, and Connor Hamlett. That was with a sizable amount of time lost to injury as well, including one entire game against Arizona State. He also only had two 100 yard rushing games, although he did have three 90 yard rushing games as well. His highest total was against Arizona with 161 yards and he also put up 118 yards against Texas. His rushing totals and his avg yards per game are good for 69th among FBS running backs though. We may have just been spoiled with great Oregon State running backs for the last decade and a half, so the standard is quite high. 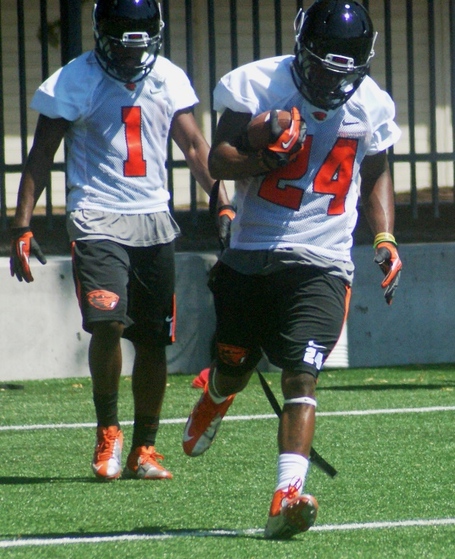 Woods is the complete package as a running back, with speed, quickness, shiftiness, enough power, good hands, vision, and is a solid pass blocker. What was impressive last year was the ability to accelerate in small spaces, which is what separates him from Terron Ward. Ward played well last year to just attack creases as they appeared, but Woods has the burst to take those creases and break them open. The one thing he was really lacking last season was staying injury free. That is something he is supposed to have worked on in this offseason, he is said to have bulked up which should help him during the year. Jacquizz Rodgers had been mocking him for looking like a wide receiver last year, so maybe that gave him some motivation as well. 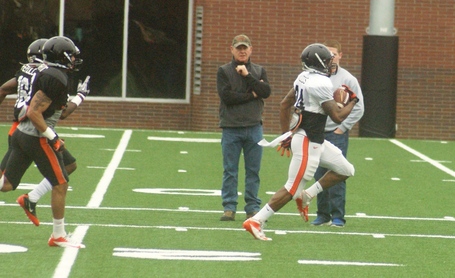 Woods should be in line for a great season and is already one of the most talked about players for Oregon State, he is currently on the Doak Walker Award watch list. With an improved offensive line anything less than a 1000 yard season would be a disappointment, which is an exciting prospect. Woods is young with an extremely high upside and one of the best players on the team already, I expect him to continue the progress he made last year and challenge for the title of top running back in the Pac-12.