Oregon State's top defensive back and co-captain is number 6 in the countdown.

Rashaad Reynolds was the number two cornerback, and this year he now is the undisputed replacement for Jordan Poyer. He did a great job last season as he was attacked more often than Poyer but showed up extremely well. He did well in both run support as well as pass coverage, and had no shortage of big hits (there is one in the first couple seconds, but I recommend watching all of it for all the highlights).

His 75 tackles were good for second place on the team, and first among all defensive backs. Part of that is because of quarterbacks avoiding Poyer's side, but Reynolds is also good against the run. He also had his 16 defensed passes which was more than Poyer, although Poyer obviously outmatched Reynolds in interceptions.

Reynolds is a captain and is on a multitude of watch lists, and rightfully so. He does not have elite size, but at 5' 11" and 186 lbs he is not that undersized as well. He is a very good athlete however, and that helps vault him from an average cornerback to one of the best in the Pac-12. His instincts are solid as well, and with Rod Perry teaching, cornerbacks are able and now willing to look back for passes. 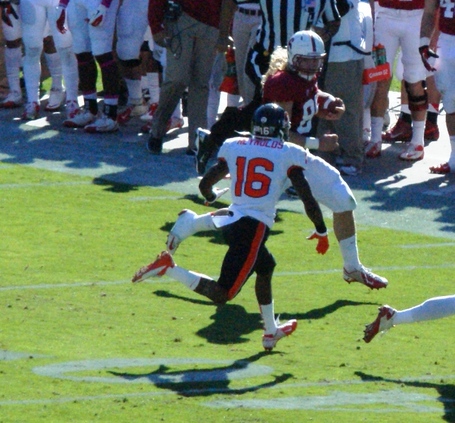 Under the tutelage of Perry, Reynolds and the entire defensive back unit have blossomed. The instructions are a pretty large difference from the past, where they are now looking back for the ball and it his stopped offenses from just throwing it at their receivers and counting on the OSU defensive backs to not swat it away. Some decent cornerbacks still did pretty well, including Keenan Lewis and James Dockery who are still playing in the NFL.

Reynolds is primed for a great year as the number one cornerback for Oregon State, he gets to practice against one of the best receivers in the country in Brandin Cooks and he already is coming off of a solid last season. He was also one of Coach Riley's choices to visit for media day so the coaches believe he is ready to break out as well.

Rashaad Reynolds is one of the leaders of this Oregon State squad and is a terrific player as well, and as such is the number 6 player in this countdown.