Alexander Out About 4 Weeks

Possibly. One of Oregon St.'s starting LBs is "week to week".

Share All sharing options for: Alexander Out About 4 Weeks

For the first week and a half, the personnel reports out of Oregon St.'s pre-season preparations for the upcoming football season have been mostly about minor dings that kept people out for a few practices, or about players down the depth chart. That changed yesterday when starting OLB D.J. Alexander went down with a sprained right knee. Today, LB coach Trent Bray shared that the projection is that Alexander, who was at practice with a brace on his knee and a crutch in hand, will miss about 4 weeks. That would mean a key cog in the Beaver defense will probably miss both the season opener on Aug. 31 against Eastern Washington, and the second game, when Hawaii comes to town.

"What they've told me is they'll look at it week-to-week," head coach Mike Riley said.

If the initial 4 week estimate holds true, then it would be the Pac-12 opener at Utah when Alexander could make his return. If he's slowed, the trip to San Diego St. might be when he sees full action, though Alexander is determined to be back sooner. We'll know a lot better in a week. At least that's better than what some feared at the time of the injury, when thoughts of most of the season crossed their minds.

LB Michael Doctor also had only limited participation in the day's activities.

The accumulation of injuries prompted Riley to cancel plans for a limited scrimmage today, and the team went through drills in shells only.

"Besides a couple guys that are hurt a little bit, we've also got so many pulled muscles and all that, it would have been hard to do anything really," Riley said.

Riley indicated he may try again on Saturday.

"What I've been thinking is that we have a lot of guys returning; we have three offensive linemen that are seniors that have started maybe 30 games. They don't need just a lot of getting beat up. Then we have some kind of new guys breaking in, so it's always hard that way. Because of that, I may have to mix and match a little bit. Just get the older guys reps, and get them prepared for the season, and then find out more and play some football with the younger guys."

In light of what was a poor performance yesterday in many areas, Riley doubtless decided giving a lot of the "1s" a day largely off might not be the best either, and today's action was sharper, as Sean Mannion took all the reps with the "1s". 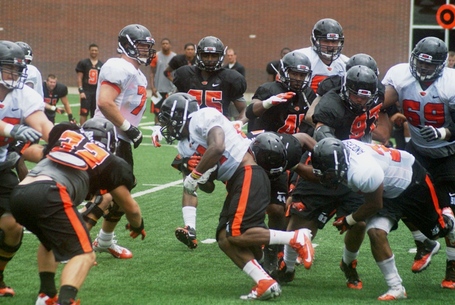 Storm Woods storms through a hole. One aspect of the Oregon St. game that's looking good is the rushing game.

But towards the end of practice, another problem arose, when C Isaac Seumalo got tangled up in a scrum, and came up limping as a result, ending his afternoon early. Seumalo's injury wasn't apparently serious, but we'll see how he is tomorrow.

It all has Riley considering seriously limiting contact the rest of pre-season.

Two sessions are on the schedule for tomorrow, and one on Saturday, before a "sorely" needed day off.