The defense adds two more in the rankings.

Share All sharing options for: Beaver Football: Top 25 Countdown - 8 and 7

Ryan Murphy was the starting free safety last season and had a strong campaign. He was the third leading tackler on the year and played very well all year. He is athletic and it shows in how far his range is. He has an impact on the game all over the field. Murphy, like Zimmerman, is a safety valve for the defense and takes care whenever things go awry. 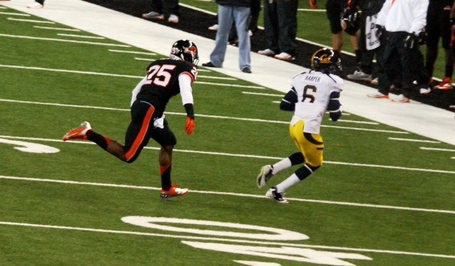 Coaches have been raving about Murphy and he has even had a feature on the ESPN Pac-12 blog. He is only a junior so there is still more room for him to grow as well.

Murphy like Zimmerman for me was not a player I noticed a lot. There were more moments and generally whenever I saw him it was for a positive play, and he has a larger list of impact plays. He initially started down further on my list, but after further evaluation with the stats in mind also he is too important to the Beavs to rank lower. He does not always make the flashiest plays, but with 37 solo tackles he is an exceedingly important stopper for OSU as well.

Michael Doctor has been starting since his sophomore year but last year is when he really got things clicked into gear. He has always had tremendous speed but he was a poor tackler until last season where he finally figured it out. One catalyst for the change might have been the addition of linebackers coach Trent Bray. His 83 tackles were good to lead the team in tackles. He also had 11 tackles for loss which is only behind Scott Crichton for the team lead.

Doctor has evolved into a playmaker, his growth and D. J Alexander's growth have allowed the defense to move into more of the nickel packages where both linebackers can play coverage, but they are also able to attack the line.

He has become irreplacable for this team, as a leader and as a player. Doctor is a captain this season and is important in that role, but is even more important as a linebacker. There is no linebacker on the roster behind Doctor that has his speed. He is needed for any kind of spread offenses, since that is the only way for the Beavs to balance run and pass defense. Doctor's improvements have been impressive and he is now one of the top linebackers in the Pac-12.