Oregon State used a three hit, two RBI performance from junior catcher Jake Rodriguez to lead the Beavers to their ninth straight victory Wednesday night, a 4-3 decision that ended up much more exciting than it should have been in the late innings.

The crowd of 3,294, 99% of which were clad in orange and black, saw the Beavers for the second straight game take a commanding lead before allowing the opposition to climb back in it late. But in the end it only took six pitches from Scott Schultz to close out Oregon State's ninth straight win, preserving a one run lead that was cut into in the seventh and eighth frames.

Portland actually drew first blood in the early evening after loading the bases without recording an out. At that point, starter Dan Child was removed from the game and senior Tony Bryant (who got the win), got a strikeout, fly out, and pop out to escape the inning with only a one run deficit.

The Beavers would immediately get the run back, although a bad taste was left in their mouths after Rodriguez made his only error of the night, grounding into an inning ending, 6-4-3 double play to leave the bases juiced and the game even at one.

Oregon State took the lead for good after rallying for a trio of runs in the fifth, first breaking the tie on a Danny Hayes sacrifice fly to center, then adding to the advantage on a two RBI single to right by J-Rod. 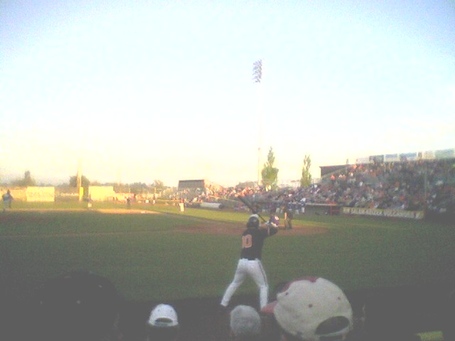 Dylan Davis In The On Deck Circle Before Batting In The Fifth. Davis Was Intentionally Walked And Later Scored. (credit: Connor Pelton)

Those runs would be just enough after the Pilots scratched to within 4-2 in the seventh, then 4-3 an inning later.

Senior right hander Cole Brocker appeared to be out of trouble in the seventh on a Nick Armenta grounder to third, but first base umpire Mike Whitty claimed Armenta beat Kavin Keyes' terrific throw to the bag, allowing the inning to continue and Cody Lenahan to take third. Lenahan would score two pitches later on a single to right by senior Kramer Scott, and all of the sudden a sleepy crowd was awake and Portland was alive and well.

The Pilots added to their momentum in the top of the eighth after getting out of the inning unscathed, a tremendous feat after Rodriguez and Keyes reached as the first two batters up. And when senior Ben Grubb led off the bottom half of the frame with a long double down the left field line, the UP bench was chirping and it seemed as if an upset truly could be in the cards. Grubb would eventually score on a wild pitch, but Brocker and Tyler Painton did a good job to hold the lead going into the ninth. 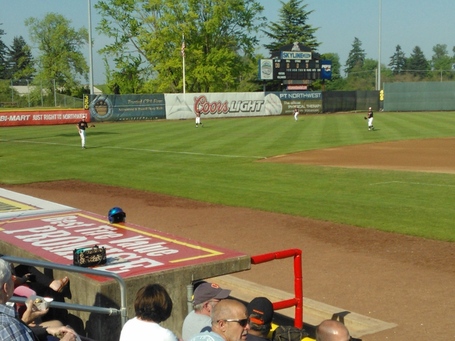 Grubb's Double Down The Line Would Eventually Pull The Pilots To Within A Run In The Eighth (credit: Connor Pelton)

The Beavers made some noise in their final at-bat of the evening, but as was the case for the majority of Wednesday's final four innings, dumb mistakes would do them in. Senior Tyler Smith got aboard on a leadoff walk, but Peterson, one of the best bunters in the nation, was unable to lay one down and watched strike three before walking back to the dugout. Smith was then picked off at first, a cardinal sin with Michael Conforto at the plate.

As I mentioned in the opening, Scott Schultz had a tidy ninth inning, throwing just six pitches and getting the quickest three outs of the night despite facing four batters. Beaver Nation erupted in relief when Kramer Scott's deep fly ball was flagged down in center, keeping the nine game streak alive as the Beavers head to the Farm.

With the win, their 18th in a row over against the Pilots, Oregon State improved to 38-8 on the season, and Portland dropped to 17-29. The Pilots put an emphasis on sticking with their pitchers longer than regular situations would dictate, trying to save the bullpen for the final two weeks of conference play. Portland is only two games back of the final spot in the WCC Tournament with six games remaining, and of course, the winner of said tournament automatically goes to the NCAA's.

For Oregon State, Stanford is on the horizon, where the Beavers will face the 26-17 Cardinal in a three game series that begins Friday night. Mark Marquess' club will likely need a sweep to stay in the conference title race, while the Beavers just need to take two out of three to pull even with first place Oregon heading into Civil War weekend.