Boyd Strikes Out A Dozen Bears To Doom California

Share All sharing options for: Boyd Strikes Out A Dozen Bears To Doom California

Matt Boyd didn't have his sharpest outing Friday night, but still struck out a career high 12 California batters to lead Oregon St. to a 6-1 win. The senior lefthander went 8 1/2+ innings before a single by the Bears' Devon Rodriguez, only the third hit of the night Boyd allowed, prompted nervous Nate Yeski, the Beavers' pitching coach to pull Boyd.

But Oregon St. has won a number of games with Boyd as the setup man for Tony Bryant, so Yeski felt perfectly comfortable having Bryant get the last 2 outs, and Boyd was the first Beaver out of the dugout to celebrate with Bryant, as they reprised their "Killer Bs" tandem.

A capacity crowd of 3,180, the third largest since Goss Stadium was reconfigured to its current layout in 1999, turned out on a summery night in the spring, where the game started with the temperature in the 80's, and only dropped into the 70's late in the contest. They saw California starter Ryan Mason get out of trouble in the second inning, getting Jake Rodriguez to fly out with 2 runners on. 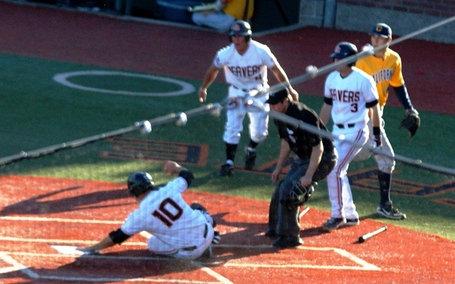 Dylan Davis scores the 3rd of 3 runs Ryan Barnes drove in with a double in the third inning.

But if the 3 runs Ryan Barnes drove in with a double into the right field corner in the third didn't doom the Bears, the 2 additional runs that Michael Conforto delivered with a single in the third inning did, given how Boyd was dealing.

California did get on the board in the 7th, when D. Rodriguez, the only Bear that figured Boyd out, homered off the side of the bleachers in left field, his 6th of the season. Boyd responded with 3 swinging strikeouts against the next 4 batters to end the inning.

Oregon St. answered with an insurance run of their own in the 8th. when J. Rodriguez's sacrifice fly scored Kavin Keyes. The Beavers might have added more, but the relay throw to the plate hit Keyes in the back, and bounced in front of California catcher Andrew Knapp, who was able to hang Danny Hayes, who had doubled to put Keyes in scoring position, up between 2nd and 3rd for an unusual 7-6-2-4 double play.

It wasn't the last odd play of the night, however, as Bryant got the 2nd out in the 9th when Devon Pearson drove a ball over Dylan Davis' shoulder in right field. But pinch runner Sean Peters couldn't assume the ball wouldn't be caught, and was easily put out at second on the fielders' choice. 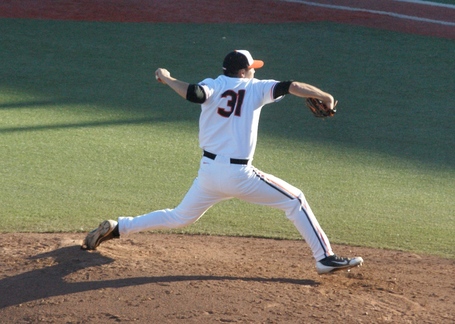 Boyd, above, picked up his 9th win of the season, and the third in which he's allowed 3 or fewer hits, improving to 9-2. Mason, who was lifted after walking Danny Hayes to lead off the 4th, took the loss, and dropped to 5-3 for the year.

Both Hayes and Keyes had 2 hit nights for the Beavers.

After a single by Tyler Smith, a walk, and Conforto's 2 RBI single, California's Keaton Siomkin settled down and did a good job of controlling the Oregon St. bats, allowing only 5 hits in 5 innings.

Oregon St. improved to 35-8 for the season, and 15-4 in the Pac-12, but though the Beavers maintained a percentage points lead in the conference season, they continue to trail Oregon by 1/2 game in w-l record, just as they have for weeks, as the teams continue to match wins and losses in the league. The Ducks lost an early 3-0 lead in Pullman tonight, but after Washington St. rallied for 3 runs, pulled out a 5-3 win over the Cougs.

California dropped to 21-24, and 9-13 in the Pac-12. The Beavers, who have now won 6 straight, snapped the 3 game winning streak the Bears brought into the game.

The series continues tomorrow afternoon at 2:05.