Share All sharing options for: Beavers Battle Back To Puctuate Pac-12 Title

Oregon St. won a wild one with a 2 out, walk-off RBI single by Ryan Barnes that scored noted Cougar killer Dylan Davis, who never should have been on base to begin with. It put an exclamation mark on the Beavers' series winning comeback against Washington St. that capped a Pac-12 Championship season.

The fourth ranked Beavers were the Pac-12 Champions entering the day, but an Oregon win and an Oregon St. loss would produce a tie atop the conference standings, which would have prompted non-sense about a shared title, even though the Beavers held the tie-breaker as a result of their series win at PK Park last weekend (hence the term tie-breaker).

But Oregon St. wanted no part of such silliness.

And it looked good for the Beavers early, as Davis, who had 9 RBIs on the weekend, singled to score Andy Peterson for a 1-0 lead in the first inning.

"I've been seeing the ball well this weekend.," Davis said.

But things immediately started to turn, as Washington St.'s Trek Stemp led off the third inning with a solo home run in the left field corner, starting a 3 run inning that started a 6 run Cougar comeback.

Collin Slaybaugh followed Stemp's homer with a double, and scored on a double by Jake Monda. Monda ended Rodriguez's 21 game streak of having thrown out 13 runners who attempted to steal, and scored on Patrick McGrath's ground out.

It was the first time Wetzler had allowed more than 2 earned runs in a game all season, never mind an inning.

After a zip-code out at second helped curb the Beavers in the bottom of the third inning, the Cougars, bent on ending their 10th place season with an upset and series win over the conference champions, added 2 more runs in the 4th inning, on 3 hits and a walk, and the early lead was gone. And even though Wetzler was able to set Washington St. down in order in the 5th, Adam Nelubowich led off the 6th inning with a single, and Wetzler's string of 7 consecutive Sunday wins, and Oregon St.'s run of 23 consecutive quality starts in weekend Pac-12 games, was gone.

Senior Taylor Starr, who may have made his last appearance as a Beaver taking over for Wetzler, got 3 outs, but Nelubowich worked his way around to score, putting Washington St. up 6-4, and Starr hit Monda with a pitch to lead off the 7th, setting off a series of additional moves by Oregon St. pitching coach nervous Nate Yeski.

Brandon Jackson took over for Starr, and got 2 outs with 2 pitches. Which got him pulled. Yeski then went to Jace Fry, who got the final out of the inning. The Beavers couldn't get anything going in their half of the 7th, but then got some good news, when word came that Utah had taken some of the sting out of consecutive last place finishes in their first 2 seasons in the Pac-12, scoring 9 unanswered runs to come from behind and defeat Oregon, a sure first round host in the post-season, 10-3, ending any hope Oregon had of catching Oregon St., and possibly costing the Ducks a Super Regional hosting top 8 seed.

Fry then opened the 8th inning by getting 2 more outs, which got him pulled. Cole Brocker, another senior who may have made his last appearance, came on and hit Stemp with the first pitch he threw, and he was gone.

Max Englebrekt came on and got Oregon St. out of the inning, and the Beaver players decided it was time for a team huddle. It changed everything.

"We heard Oregon lost, but we didn't want to take it that way," Davis said.

Faced with the question of whether they wanted to celebrate claiming the conference with a Duck loss or a Beaver win, the response was "Why not both?"

Danny Hayes followed with another no-doubt shot into the right field bleachers, and the Beavers had tied the game at 6 apiece.

Barnes followed with a single, ending Monda's stint pitching in relief of starter Scott Simon, but the Beavers couldn't crack the equation on Cougar closer J.D. Leckenby, who took over with most of the crowd of 2,988 loudly chanting "O-S-U...Oregon State! Fight! Fight! Fight!", but proceeded to close the door Davis and Hayes had opened, and appeared to have the game headed for extra innings when, after getting Peterson and Conforto to ground out, Davis lifted a soft fly ball into right field for the apparent 3rd out.

The on again off again swirling winds prompted the Cougs to "Coug It", allowing the ball to drop, and Davis cruised into second base.

Leckenby walked Hayes to avoid any chance of another shot into the bleachers, but Barnes ended the game and the regular season with a shot into left field. Davis, coming hard all the way, beat the throw by a small margin, setting off a large celebration of Oregon St.'s third Pac-12 title since reunification of the conference in 1999, second only to Arizona St.'s 4, something that slipped through their fingers in each of the last couple of seasons.

After wiping a shaving cream pie courtesy of Max Gordon off his face, Barnes said "Dylan and Danny came up huge for us in the 8th, and so they were going to intentionally walk Danny.I was sitting on the fast ball, and I got it, and barreled it."

Here's how it looked from the opposite side:

Englebrekt got the win, improving to 4-1 for the season, while Leckenby got the loss, finishing the year 2-4.

The Beavers now await announcement of the 16 regional hosts tonight at 6 PM, one of which will be theirs, and then, more importantly, the seeding show tomorrow morning at 9 AM PDT on ESPN, when the 8 national seeds, the rest of the field, and the matchups will be announced. 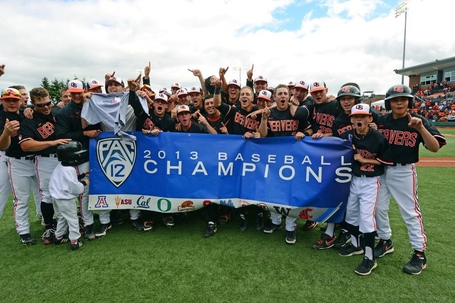 (Photo via Twitpic by OSU)