Share All sharing options for: Woods Storms Through Scrimmage

Oregon St. wrapped up the second week of spring football practice with some scrimmage action, and the highlight of the day was running back Storm Woods storming through the Beaver secondary on his way to an 80 yard touchdown sprint. 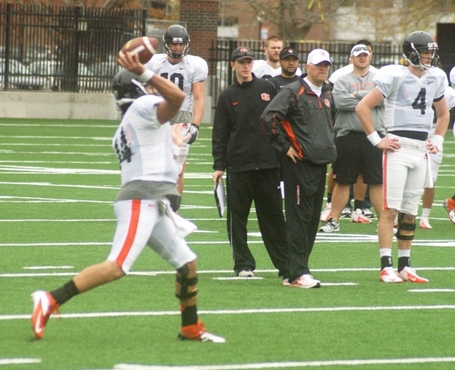 The officiated action included both 7 on 7 and full squad drives, with 1s, 2s, and 3s all taking turns. Notably, after several practices where Sean Mannion got most of the work with the 1s, and Cody Vaz the 2s, head coach Mike Riley flipped the switch, and today it was Vaz, above (with Mannion looking on) that spent most of his time with the starters, while Mannion ran the series with the second string.

"Today was good; the young guys got a lot of turns at the end," Riley said "The players get a little nervous when they hear the word scrimmage, but overall I thought it was a good day. Both Sean (Mannion) and Cody (Vaz) looked good in both the scrimmage and the skeleton (7 on 7) drills."

Both quarterbacks continue to look both strong and accurate, though there could be more balls not dropped. Obum Gwacham did have a good touchdown catch in the red zone, on a 4th down play, after Cooks had come up with a catch in traffic on 3rd and long that created a situation where a makeable field goal or a convertable 4th and 3 were both viable options. 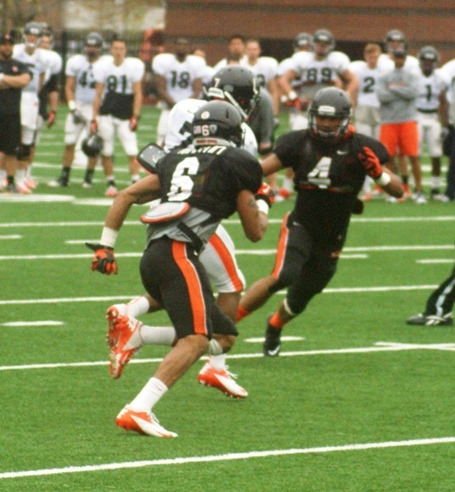 Most of the series were passing oriented, with Brandin Cooks as the possession receiver a recurring theme. Sean Martin's spring hasn't been an easy one, thanks to Cooks, but Martin won't see many receivers that are the equal of Cooks when it comes to ability to get separation this fall.

Another somewhat surprising notable detail about the scrimmage series was a decrease in the opportunities for the tight ends and H-backs compared to earlier sessions. The number of rushing plays was also down, relative to passes today.