Oregon State softball goes 4 and 1 in the Easton Invitational

#24 Oregon State softball continued their early season success winning 4 out of 5 games in the Easton Invitational. Even though the OSU winning streak was finally broken at twelve games, the Beavs lost to Iowa 9 to 3, the softball team controlled the weekend with another strong showing of offensive power and pitching control.

Share All sharing options for: Oregon State softball goes 4 and 1 in the Easton Invitational

Over the weekend in Fullerton, California the Oregon State softball team had another dominating Invitational showing by defeating Northwestern 6 to 1 (six innings), Cal Poly 11 to 2 (five innings), Indiana 2 to 1 (eight innings), and CSU Bakersfield 8 to 0 (five innings). The one hiccup was a loss to Iowa 9 to 3, which snapped a twelve game OSU winning streak. Disappointing as that one game had to be, the Beavs had to be very pleased with their overall showing in the Easton Invitational. 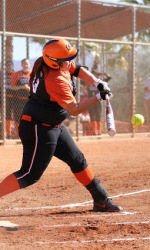 Oregon State came in ranked #24 to another on the road invitational series (the Beavs have yet to play at home this season) and proved that they have well earned that ranking by controlling 3 out of the 5 games and winning 4. All of which takes the Beavs to an overall record of 17 and 4 this season.

Some highlights from the weekend included a record performance by sophomore Dani Gilmore and senior Elizabeth Santana who both had four hits in the 11-2 win over Cal Poly. Gilmore and Santana's "four-hit efforts are the 14th and 15th in school history, and it is the first time two Beavers pulled off the feat in the same game." In the second game of that same day the Beavs defeated Indiana in a pitching duel 2 to 1, which saw Santana belting in the winning run in the eighth inning and star senior pitcher Marina Demore winning her 11th game of the year (Demore is now 12 and 2 for the season).

To back up now to the opening game against Northwestern, which Oregon State won 6 to 1, senior Desiree Beltran (left) homered to help lead the way offensively along with senior Ashley Sanchez going 3 for 4 with 2 RBIs and scoring three runs. The pitching was again spectacular as senior Tina Andreana goes the distance allowing only one run on three hits in six innings. Beltran homered again in the nightcap game against Iowa, but in this case it was not enough to help the Beavs as they dropped the game against the Iowa Hawkeyes 9 to 3. But the next day showed that the #24 ranking was well deserved as the Beavs bounced back to win the two Saturday games.

Finally on Sunday the Beavs controlled the game from the start, scoring two runs in the opening inning that included the Beavs sophomore Dani Gilmore taking advantage of a CSU Bakersfield fielding meltdown as Gilmore was able to score from first on a bunt single by senior Ashley Sanchez and a RBI single by senior Lea Cavestany finished out the scoring for the inning; the Beavs then scored four in the fourth inning and two in the final fifth.

The Beavs continue their own Kerouac "on the road" novel as they go to the Fresno State Invitational this upcoming weekend to take on Saint Mary's and Fresno State this Friday, Iowa State on Saturday, and San Diego State on Sunday. The team finally returns home for a short two game double-header home stand against New Mexico March 14th, to then go back on the road once again for six games including the Pac-12 opening series against #3 Arizona State.