It took until the 6th inning, after a couple of missed opportunities had left it only 2-0 Oregon St., but the Oregon St. bats finally came alive in mass, and the Beavers proceeded to blast Bryant. Michael Conforto needed 2 games yesterday to blast 2 home runs, but he went yard twice in consecutive trips to the plate today, starting with his first ever grand slam in the 6th, and when Bryant surprisingly threw to Conforto again the next inning, he drilled a 3 run homer over the scoreboard to extend the score to 13-0, sending much of the crowd of 1,932 for the exits, and signaling mass substitutions that got most of the bench into the game, as 7 of 8 defensive positions saw a replacement in the game by the times things ended.

The 6th inning saw the Beavers send 13 hitters to the plate, and featured a 2 RBI double by Andy Peterson shortly before Conforto's blast, but also saw doubles by Gabe Clark and Dylan Davis. 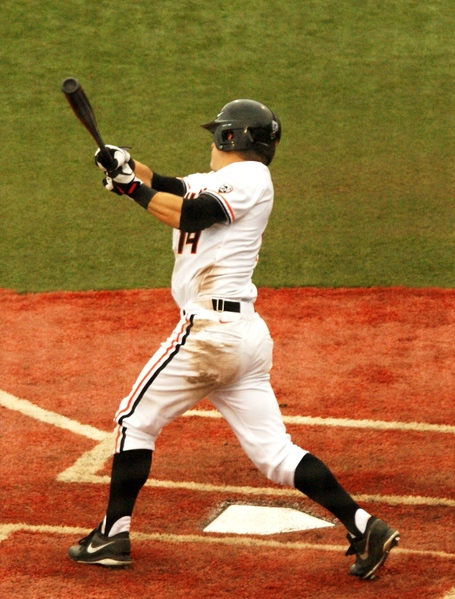 Andy Peterson snapped out of a 7 at bat slump with a 2 RBI double that jump-started the explosive 6th inning.

Conforto made a great case for Pac-12 Player of the Week with his 4 homers, and 12 RBIs, including 7 today. The 4 has his career total at 17, and while today's was the only one that was a grand slam, there's also ever been 1 that was a solo homer.

Conforto's 7 RBIs was the first time in 4 years any Beavers has driven in as many in a game, since RobFolsom did it against Northern Illinois in 2009. Conforto is also the first Oregon St. player with homers in 3 games in 6 seasons, since Mitch Canham in 2007 against UNLV.

Conforto talks about his bang-up day:

Nate Esposito added an RBI single in the 8th to drive in Jake Rodriguez, whose' eagle eye had drawn his 5th walk of the day, to make the final 14-0, and complete the 4 game sweep of Bryant.

"This was a great way to end the series," Oregon St. head coach Pat Casey said. "We played well midway through this game after starting slow. Bryant played very well in this series, and this is a good sweep."

Oregon St. might have broken things open earlier, but Tyler Smith made a base running error, and the first out of the 4th inning at 3rd base, which cost the Beavers a run on Davis' first double of the day. But Danny Hayes' hustle that made a play at first so close that he got the benefit of an apparent wrong call got an extra run, and Oregon St. took a 2-0 lead.

Meanwhile, the Oregon St. pitching staff continued to dominate. Ben Wetzler made his first appearance of the season, and went 3 2/3 innings, allowing only 1 hit. Casey pulled Wetzler after his first walk, which seemed a bit early, even by Casey standards, as Wetzler wasn't struggling, and had thrown only 41 pitches. But Casey has been extremely careful with Wetzler, who was available last weekend, but never even saw a bullpen mound, after his back stiffened up prior to opening weekend.

Having a bullpen that still hasn't allowed an earned run probably makes that cautious call an easier one to make, though.

Brandon Jackson came on, and struck out 5, while allowing only 2 hits in 3 innings of work, and ultimately picked up the win. Zach Reser finished the Bryant 7th, getting the last out, and also threw the 8th, before Tyler Painton wrapped it up. Both Reser and Painton were perfect.

The Beaver defense also turned in a good, and error free, and turned a couple of good double plays behind the pitchers to help keep any serious Bulldog threats from developing.

Bryant used 6 pitchers, with starter Joseph Michaud getting the loss, though it was John Healy that gave up 3 doubles and the grand slam, and 7 runs, while getting only 1 out, that took the brunt of the abuse from the Beaver bats.

Bryant, the defending Northeast Conference Champions, slipped to 0-6-1 to start their season.

The Beavers will take their 12-0 record to Portland Tuesday, for the first of 3 games this season against the Pilots, before a returning to Goss for a 3 game series against Texas St. next weekend. 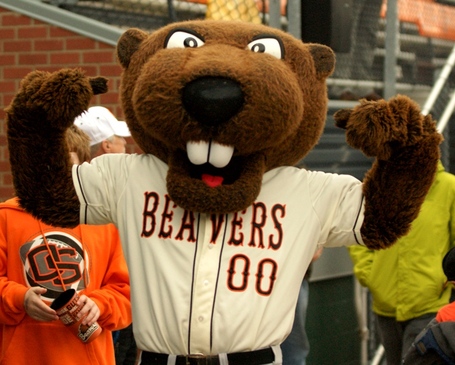 It was definitely a great day to be a baseball Beaver!