Last week we reviewed the Oregon St. men's basketball season, for the annual exercise of rating Coach Craig Robinson using the patented Beavertail rating system developed by Fanoverboard that we use for each of Oregon St.'s major program coaches. If you haven't done so, you can still weigh in with your tail rating.

Its time now to rate Coach Scott Rueck of the women's basketball team.

The parallels between the men's and women's season are numerous this year. Like the men, the Oregon St. women were coming off their best season in a couple of decades, and a post season appearance, the Women's NIT in their case. As a result, Rueck earned the conference Coach of the Year honor, and an 80% Beaveriffic rating.

And most of the lineup was returning. So, as was the case with the men, expectations abounded for a good season, and another opportunity for post-season play.

As even the most casual Beaver fan is all too aware of, that didn't happen for either team. The women posted the exact same 4-14 Pac-12 season record as the men, and exited the Pac-12 Tournament after an opening day loss, just as the men did. So Beaveriffic won't be an option this time around.

The biggest cause was also eerily similar. Just as the men's team suffered a major setback when senior captain Angus Brandt suffered a season ending knee injury in November, the women took a similar serious setback when senior point guard Sage Indendi was lost for the season after surgery on her ankle. The announcement came within hours of Brandt's diagnosis.

Coach Rueck faced the same problem; in addition to losing direct production (and lots of it), he lost senior leadership. And being the team's point guard, production of everyone else took a hit as well.

Indendi didn't play at all, suffering the injury right before the start of the season. It was initially hoped that rest could resolve the problem, but that soon proved to not be the case.

Unlike the men's team, the women didn't get off to as good a start, and were only 6-6 heading into the Pac-12 campaign, hence the ultimate record of only 10-21 after an equivalent conference season.

Starting Pac-12 play, there was still optimism for a competitive campaign, and that persisted even when the Beavers were swept by the LA schools on the first weekend, as the losses were by only 1 point to USC, and 4 to UCLA, who would go on to finish 3rd in the conference.

The trip to Arizona earned a split, with the win in Tucson ultimately being the tie-breaker that got a 10th place finish for the Beavers. Oregon St. then returned to the state, and swept the strangely scheduled back to back Civil War games against Oregon, improving to 3-3 in the conference.

Sweeping the Civil War is always a good thing, but it would turn out to be less meaningful than usual, and no indication of things to come, as the Oregon program was already well on the way to going completely off the rails. The Ducks would go on to a last place 2-16 Pac-12 season, and would win only 4 games total, against 27 losses. Rueck would have swept the series with his original team assembled with players from on-campus tryouts.

Things went down hill from there. A pair of overtime losses on the Washington trip started the Beavers on a skid where they lost 10 straight before a late season 54-46 upset of Utah.

In a scenario Oregon St. fans were all to familiar with from the men's season, as well as in Rueck's first campaign in 2010-11, the Beavers lost a pile of games they were in at the end. This year's women's team lost 9 games by 5 points or less, including all 4 of the games they got into overtime.

Just as in both of those other cases, turn those around with 1-3 plays in the game going differently and we are again talking about at least a WNIT team. But because those few plays, be they baskets or stops, didn't happen, attendance dropped, and Gill got to be pretty quiet by the end of the season. Just as was the case with the men.

However, there was one area where the women's team didn't parallel the men this year. While the men were never blown out, with their largest loss by 13 points, the women suffered 8 losses by more than that 13 point margin. Some much more.

Rueck's team was resilient though, and there were examples like bouncing back from a 37 point loss to Stanford to come within 2 points of California, who finished in a tie with the Cardinal for the regular season conference title with a 17-1 record.

"I was really pleased with the team with their perseverance through that adversity, and I thought we played our best basketball down the stretch of the season," Rueck said.

But mostly, without Indendi, it was a rebuilding year, and that became obvious relatively early on. And it produced a couple of the bright spots looking ahead. 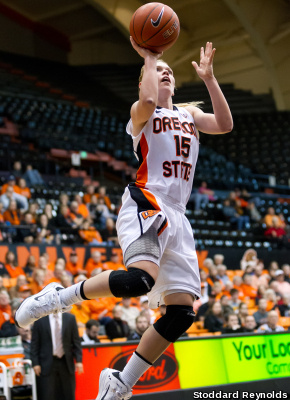 Freshman Jamie Weisner, above (OSU photo), started 24 games, and led the Beavers in scoring, with 12.4 points per game. As a result, she was named to the All-Pac-12 freshman team, and was an honorable mention to the All-Conference team.

Another freshman, Deven Hunter, made 28 starts, and led Oregon St. in rebounding, with 6.1 per game.

Rueck was also successful on the recruiting trail, landing 6'1" guard Sydney Wiese from Phoenix, Arizona. Wiese was named the Arizona Player of the Year, after averaging 24.4 points, 5.2 rebounds, 4.8 assists and 2.9 steals per game, and also set a school record with 114 3 pointers made.

The youth movement will be crucial to a turnaround, as, unlike the men's team that returns all but 1 player, the women must replace 5 seniors off their squad.

Rating a severely disappointing season that saw a major falloff has to consider causes, such as serious injuries, as well as evaluate depth, and by implication, recruiting. Something Rueck really only has had 2 seasons to do during his stay at Oregon St.

Close losses, especially when there are a lot of them, also give rise to the debate about coaching. Should more of those been won? Were they let get away? Or were actually closer than they should have been, but for coaching and players who didn't quit?

Is there the talent on hand to win those games? If not, what will it take to get it?

Like Robinson, Rueck's 2011-12 success earned the opportunity to turn things around next year, as Athletic Director Bob DeCarolis and University President Ed Ray value Rueck for the tremendous ambassador for the University that he is.

But being the 4th major program means women's basketball is business, and increasingly so in the era of increased tv exposure on the Pac-12 channel.

Next year will be an interesting year in hoops at Gill. Beaver fans hope that interest will be a positive one, and that both the teams bounce back in parallel, as their rises and stumbles the last 2 years have been.