Drew Stankiewicz led off the game for Arizona St. by singling to right center field. Oregon St.'s Matt Boyd decided that was enough of that. Boyd then proceeded to no-hit the Sun Devils the rest of the night.

"That was a good game," Boyd said.

That's putting it mildly. To put this in some perspective, this is Arizona St. we are talking about, one of the premier hitting programs in college baseball for generations. The last time the Sun Devils were 1 hit was 30 years ago, and that took a combined effort by Alabama pitchers Alan Dunn and Tim Meacham when the Crimson Tide beat Arizona St. in Omaha for the 1983 National Championship.

Boyd retired 12 straight after the leadoff hit, and only walked 3 batters. He immediately cleaned up 2 of those walks with double play balls, and stranded Max Rossiter when he walked in the 7th inning with one of his career-best 11 strikeouts on the night.

"It was awesome, to get those double plays," Boyd explained. "To be able to count on those guys to pick you up when you make a mistake really helps."

Meanwhile, the third ranked Beavers were slow-killing the 20th ranked Sun Devils with paper cuts, scoring single runs in the 1st, 2nd, 3rd, 5th, and 6th innings. Oregon St. could have, and probably should have "10 runned" Arizona St., to borrow a high school and mid-major term, though, squandering as many scoring opportunities as the capitalized on, leaving runners in scoring position, several of them at third, and many in position with no more than 1 out.

But the way Boyd was dealing, it must have felt like a 15-0 deficit by the end of the frigid night to the Sun Devils.

An ice and hail storm interrupted pregame preparations, but by time for the first pitch, the rain had relented, and the skies cleared to leave the small crowd of 1,831 bundled up fans to shiver through one of the best pitching performances by a Beaver ever.

"I grew up in this kind of weather, and I'm comfortable pitching in it," Boyd, a native of Mercer Island, Washington, said.

Boyd entered the game coming off having 2-hit Arizona last Friday night, which earned him his second Pac-12 Pitcher of the Week award of the season. But with shortstop Tyler Smith declared out for the weekend due to lingering effects of being hit on the hand by a pitch in the first game of the San Francisco series, there was some nervous murmuring about what Smith's absence would mean, and whether Boyd could keep up his strong early season performance with both the offense and defense disrupted.

Smith had played the next day after being hit, and again, in all 3 of last weeks games at Arizona. But in a surprise move announced right before game time, Oregon St.'s medical staff decided Smith should be shut down, at least for this weekend's series, with further evaluation to come next week.

Oregon St. Coach Pat Casey moved Andy Peterson to short and inserted Kavin Keyes at second, and moved Ryan Barnes up to the #2 spot in the batting order.

Peterson and Keyes responded by combining to turn the 2 double plays, and Barnes sparked the Beaver offense, doubling in the first inning, and going on to score what would be the winning run, as Michael Conforto and Dylan Davis followed up with hits.

"It's always 'Next Beaver Up' in situations like this," Boyd said. 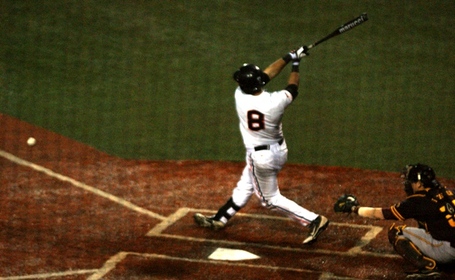 Barnes would score again, in the 5th, after walking and being advanced by Conforto, above, who singled his first 3 trips to the plate, when Davis drove him in again with a sacrifice fly for his second RBI of the game. 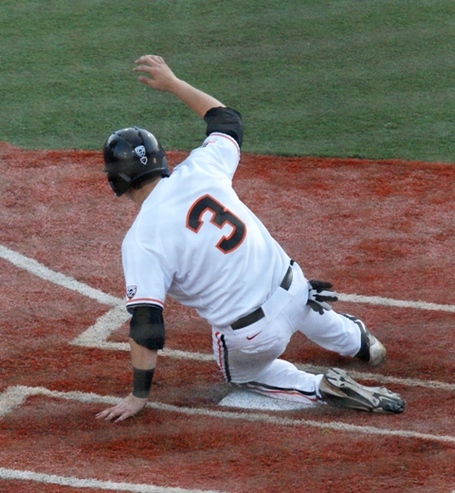 Keyes, above, had 2 hits, and scored twice, on RBIs by Jake Rodriguez and Peterson.

And Boyd dominated, with late movement on many of the 113 pitches he threw.

It was also Boyd's first complete game, which improved him to 5-0 for the season, and 16-1 for his career.

Arizona St. starter Trevor Williams allowed 7 of the 9 hits Oregon St. banged out, and 4 of their 5 runs, and took the Friday night loss for the Sun Devils for the second week in a row, dropping to 3-2 for the season. Matt Dunbar took over for Williams in the 6th inning, allowing 2 more hits and Keyes' second run. Darin Gillies and Billy Young were perfect in the last 2 innings for Arizona St., with Gillies being especially impressive, but by then it was way too late for the Sun Devils. 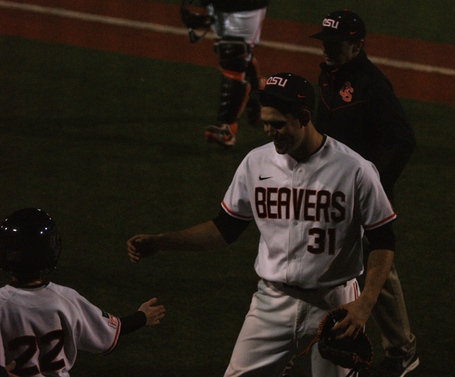 A happy Matt Boyd gets congratulations after his stellar pitching performance.

The teams resume their series tomorrow at 2:30.