It was a full day of baseball as Oregon State baseball wins both games of the double header against the Bryant Bulldogs. OSU wins the opener of the day 7 to 2 and just as the rains finally make an appearance finishes the day winning 3 to 1.

Share All sharing options for: OSU baseball sweeps the day and goes to 11 and 0 for the season

We got a lot of baseball today, and it was a good day to be a Beaver baseball fan, including the 2,025 that showed up at Goss, as the team sweeps the double header against Bryant. The day overall was the Michael Conforto show as he gets the first OSU home run of the year in the first game to follow up in the second game with another two run shot. Conforto went 3 for 4 with 3 RBIs in the early game and 1 for 3 with 2 RBIs in the second. But Conforto did have to share the stage in the second game with freshman pitcher Andrew Moore who had a stellar performance in his first game in front of the home crowd. Moore goes eight innings and strikes out seven batters with only one walk (coming in the eighth inning) and ended up allowing one run on four hits.

The first game looked to be one to change up things a bit with possibly more of an offensive showing by both teams--as opposed to the Friday evening defensive and pitching battle--with Bryant scoring one run and OSU scoring three in the first inning. But things settled down for Oregon State even with starting pitcher Dan Child being not as sharp as usual. The Beavs though were able to continue to put the pressure on offensively and scored two runs in the fifth and two more in the seventh to win by a score of 7 to 2, and OSU out-hit the Bulldogs ten to four. The highlight was Michael Conforto's two run home run rip, below, that wound up high up into the right field bleachers in the fifth inning. 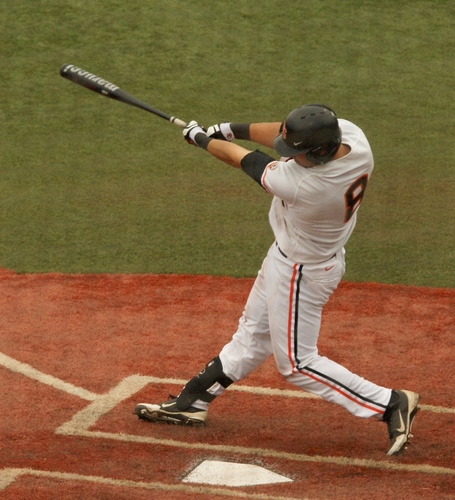 The first game, as noted above, was not as sharp defensively as Oregon State had two errors (to match Bryant's two errors). Child though was effective enough with five strikeouts and was able to go seven innings to record his third win of the season. Tony Bryant came in to close the game and pitched a solid two innings, only giving up one hit.

The second game looked to again to have the Beavs ready for an offensive show with Conforto belting another two run home run. Dylan Davis followed up with a single up the middle but things petered out as Joey Matthews was picked off on a misread of the signals. After the first inning the Beavs were not able to score again until Gabe Clark's RBI triple in the sixth, below. A key was the Bryant Bulldog starter Kevin McAvoy being able to settle down and find his rhythm after the shaky first inning. 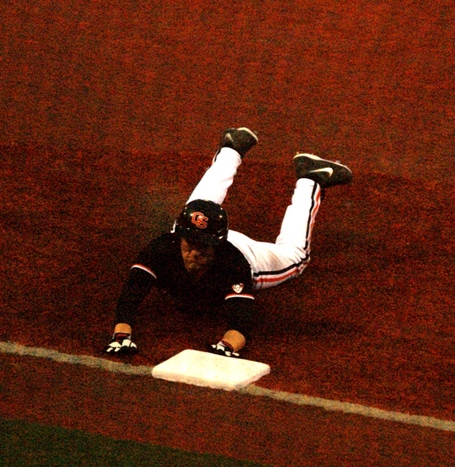 The Beavs though still controlled the game with an outstanding pitching performance by Andrew Moore, who showed his same overall control from earlier games but also seemed to find some nice power to his throws. Moore even wowed more with a beautiful pick off of a Bryant runner at first base. It was a freshman show on the mound too as Max Engelbrekt came in to close the game, recording his second save of the season.

But the Bryant Bulldogs made it interesting in the ninth of the final game, along with some help from the Northwest rains, but the Beavs were able to close out the day with their second Saturday win to go 11 and 0 overall. The final numbers for game two: Oregon State had three runs on five hits with one error (a questionable error call at that with Smith making a very good attempt on a hard hit ball) and Bryant had one run with five hits and no errors.

Bryant and Oregon State match up one more time Sunday with the first pitch scheduled for 1:05. LHP Ben Wetzler will get his first start of the year.