Oregon St. had more streaks than Utah in a streaky game that broke a 3 game Beaver losing streak Wednesday night.

Roberto Nelson and Joe Burton proved to be a 1-2 punch for the Beavers that the Utes couldn't control. Despite a deep bruise to his right quad suffered in practice earlier in the week, Nelson still posted his third consecutive 20 point game, the first such run in his career, with a game high 26 points. Burton, who has been playing the best basketball of his career of late, again flirted with a triple double, something no Beaver besides Gary Payton (1 time) has ever achieved. Burton posted a 17 point, 10 rebound double double, but could only come up with 7 rebounds.

The first quarter of the game was a close and competitive contest, though low scoring, thanks to cool shooting from the field that would plague the game, and it was only 10-10 at the first media timeout, almost 6 minutes into the contest.

Fueled by Burton assists, and a lot of animation on the part of head coach Craig Robinson, Oregon St. made a 10-0 and 14-2 run, capped by a Challe Barton 2 + 1 that made it 22-12 Beavers just past the midway mark in the first half.

"I wanted to make it clear to the team, and the referees, and everyone, that I'm as much into it as they (the team) is," Robinson explained. "It's tough on you as a coach when your guys are working hard enough to win, and they aren't getting the wins, so I thought I needed to show them I was there for them. They in turn really responded."

But then, as suddenly as they had taken off, the Oregon St. offense went dormant from the floor.

The Beavers wouldn't hit another field goal for nearly 6 1/2 minutes, and had only 1 basket the rest of the half. As a result, Utah went on an 11-1 run to tie the game at 23 apiece.

Both teams were in the low 30's percent wise from the field in the first half.

It looked like Oregon St. would blow the game open early in the second half. Devon Collier opened a 12 point lead on a 2 + 1 opportunity to get things started, and then, out of the first media time out, Burton wrapped baskets around an Ahmad Starks score that opened a 45-29 lead, and forced Utah coach Larry Krystkowiak into an early timeout.

It didn't help initially, though, as Eric Moreland proceeded to get a blocked shot, which lead to a layup by Challe Barton, who started for the second game in a row in place of Jarmal Reid, on another assist by Burton, and Oregon St. opened their largest lead of the game, going up by 18 points, 47-29 with 13:21 left.

But the streakyness continued, and Utah snapped out of their 4 1/2 minute scoring drought with a 7-2 run to the next media timeout. The run eventually reached 12-2 on Jared DuBois' 3 pointer that cut the Oregon St. lead to only 8 points, as the Utes pulled within 49-41 with still almost half of the second half still to go.

Nelson bailed the Beavers out again, though, with a basket, and then a 3 pointer. Utah freshman Brandon Taylor, who led the Utes with 21 points, answered with a 3 pointer, but Burton hit back to back baskets to make it 61-48 with 5:25 left.

Nelson reached the 20 point mark, Burton buried another basket, and then Nelson nailed a 3 pointer that put Oregon St. up by 14 points, and the only thing left for the smallish crowd of 4,118 on Football National Letter of Intent day that didn't even half fill Gill was to watch the benches be cleared, and the Beavers cruise to the 18 point, 82-64 win. 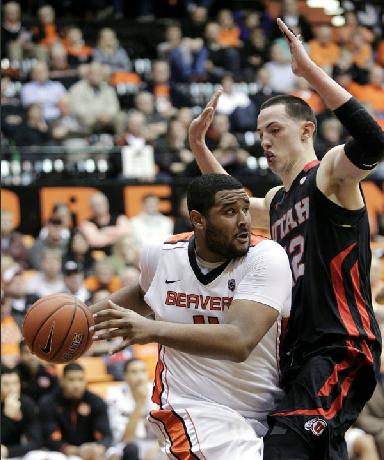 had another strong all around game. (AP Photo by Don Ryan)

Barton, who was still struggling himself with a bruised thigh suffered in the Stanford game, just missed double digits, with 9 points, and Moreland just missed a double double, also with 9 points, to go with his game high 15 rebounds.

DuBois added 20 points to the Utah total, but the next player on the ledger was freshman Jordan Loveridge, the Ute's leading scorer and rebounder, and he had just 7 points, and 8 rebounds. Loveridge, who injured his knee against Stanford, and missed Utah's last game, a home win over Colorado, came off the bench, but made only 3 of 11 from the field, and missed all 3 of his 3 point attempts.

Utah's 6'10" center Jared Washburn was held to just 2 points and 6 rebounds, and 2 Ute starters didn't even score against one of the better defensive efforts by Oregon St. in a while.

Though Oregon St. shot a much better 16 of 27 from the field in the second half (after going only 10 of 30 before the break!), the margin could have been even bigger had Burton not shot only 8 of 17 from the field.

"I take the blame for some of Joe's missed shots that prevented him from having an even better night," Robinson said, "because we didn't prepare for the triangle and two defense Utah used. But we needed him to be a threat, so he took the shots we needed him to take. I couldn't be happier for him, the way he's playing."

The adjustment of the game was the halftime offensive adaptation to the Utah defensive scheme, one Oregon St. hadn't encountered previously this season.

That and Nelson's repeated clutch scoring.

"I was so close to not playing him," Robinson said of Nelson. "He took a shot and couldn't even walk yesterday. I'm glad I wasn't dumb enough to not play him. When you look at the tape, your going to see a guy who, along with Joe, put this team on his shoulders."

"I feel a lot better today," Nelson added. "Once the adrenalin got going, it didn't hurt anymore."

11th place isn't anything to get excited about, but when your in last place, as Oregon St. was entering the game, you can't climb any higher until you get up to 11th.