Share All sharing options for: Oregon Storms Back To Sweep Civil War

Pac-12 leading and 24th ranked Oregon stormed from behind in the second half for a 10 point win in the 339th battle of the Civil War Thursday night, as an all too familiar scenario unfolded once again for Oregon St.

As has happened in a majority of their Pac-12 games this season, the Beavers held a halftime lead, extended it early in the second half, and then proceeded to lose said lead, and the game.

The swing in momentum was even more monumental than usual this time, though. Leading 45-36 2 1/2 minutes into the second half, it appeared Oregon St. was poised to pull their first upset of a top 25 team on the road in 28 years, since an upset at Washington in 1985, when Eric Moreland powered to the basket, below (USA Today photo by Scott Olmos), for an apparent dunk over Tony Woods that would have opened a double digit lead. 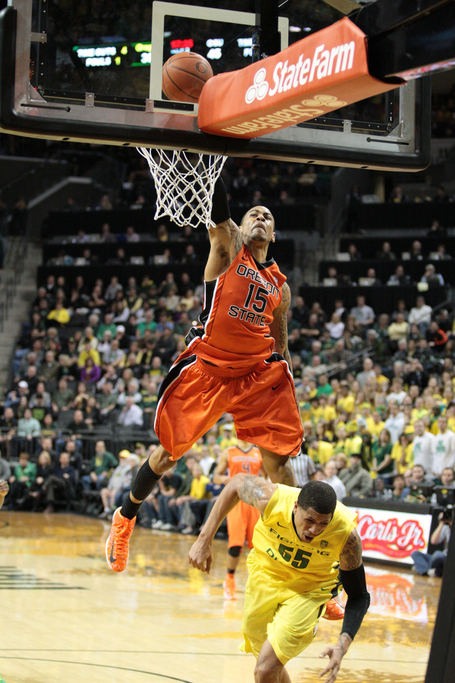 Instead, the basket was waived off for a charging foul (which was a good call), and Moreland picked up a technical foul as well in the aftermath. And even though Woods had to leave the floor for a while, momentum completely turned almost instantaneously, as Oregon went on an 8-1 run.

Moreland would pick up his 4th personal foul with 12:21 to go, this time on what Oregon St. head coach Craig Robinson labeled an irresponsible call, and Oregon's Arsalan Kazemi tied the game at 52 apiece with a pair of free throws.

Oregon went ahead on a 3 pointer by Dominic Artis, who made his return to the floor tonight, after missing much of the conference season with an ankle injury, but it was the 3 consecutive dunks that the Ducks got that blew the game open.

Woods, who had returned from the locker room, made back to back throw downs, with Moreland essentially unable to offer resistance due to foul trouble. Joe Burton then picked up his 4th foul on a moving screen with still more 10 minutes to go, and Kazemi cramed home another dunk, extending the Oregon run to 25-9, and the score to 61-54.

E.J. Singler extended the lead to 10 points, putting Oregon up 64-54 with 9 minutes left, and Oregon St. only a couple of times even cut the deficit to single digits at that, and never got closer again than 8 points.

Burton fouled out with 5:45 still to go, on a double foul with Woods, and everyone could have saved some time had the game been called with 5 minutes left, as Oregon led 72-62 at that point.

While Oregon St. has been almost unbeatable when leading with 5 minutes left, they have still not managed to come from behind when trailing at that juncture.

The partisan crowd of 10,621 that turned out for Senior night and Phil Knight's 75th birthday party (which went quite well from the Duck point of view) could have started to celebrate the careers of Singler, who is the winningest player in Oregon history, Woods, Kazemi, and Carlos Emory sooner; the game, which didn't tip off until 8:10 PM, took 2 hours and 20 minutes to complete, but was over even before Oregon sank 7 free throws down the stretch.

Oregon's ability to make free throws was key to their comeback win, though. After making only 1 of 6 from the line in the first half, the Ducks hit 23 of 27 after the break.

"I don't want to blame fouls, but it was very uneven at the beginning of the second half.," Robinson said. "And we missed our foul shots. You have to be tough in games like this, against a team that is ranked, and fighting for the Pac-12 Championship."

Things had taken on a completely different look in the early going. Roberto Nelson got started with a 2 +1 opportunity, which put him over the 1,000 point mark. By becoming the 38th member of the Beavers' 1K point club, Nelson made this only the 7th Oregon St. team to ever have 2 1,000 point scorers (with Devon Collier) on the squad at the same time. (If Burton can score 6 more points this season, which seems a certainty with a minimum of 3 games left. the 2012-13 Beavers will join the 1980-81 team that featured Steve Johnson, Mark Radford, and Ray Blume, as the only Oregon St. teams with 3 1,000 point club members.)

Nelson went on to hit 5 of his first 7 shots, and had 12 points just 8 minutes into the game.

Oregon then lost Damyean Dotson, who had to be carried to the locker room, not to return, unable to put weight on his right leg. Dotson suffered an apparent knee and/or hip injury after a blocking foul on Challe Barton when he attempted to continue his shot. Moreland came across the lane for the block, and in what turned out to be irrelevant post foul action, knocked Dotson off balance, and Dotson crashed hard onto the floor.

However, Moreland was only able to add 9 points in the second half, which made him the runaway leading scorer in the game, with 31 points, 10 more than Emory had off the bench to lead Oregon, and when no one other than Collier reached double digits for Oregon St., it wasn't enough.

"The guys executed the game plan well in the first half," Robinson said. "But we got away from what we had been doing in the second half, when they made their run. They made adjustments to make somebody else try to score, and it would have been fine had our others guys not been in foul trouble and not able to respond. You can only do so much when your trying to not foul out of the game."

As much a problem as the foul trouble Moreland, who had 7 points and 7 rebounds, and Burton, who finished with 8 points and 8 rebounds, encountered was the continuing slump Ahmad Starks stayed in. Starks added only 4 points to the Beavers' cause.

"I have to figure out how to get him going again," Robinson said, "and I'm just at a loss. I though giving him more minutes might let him play out of it, but he got 30 minutes and only got up 4 shots, and made just 1. We have come to depend on him so much, that that's a real problem."

Collier had 14 points, but the Oregon St. bench only contributed 15 points, and Barton was shut out. 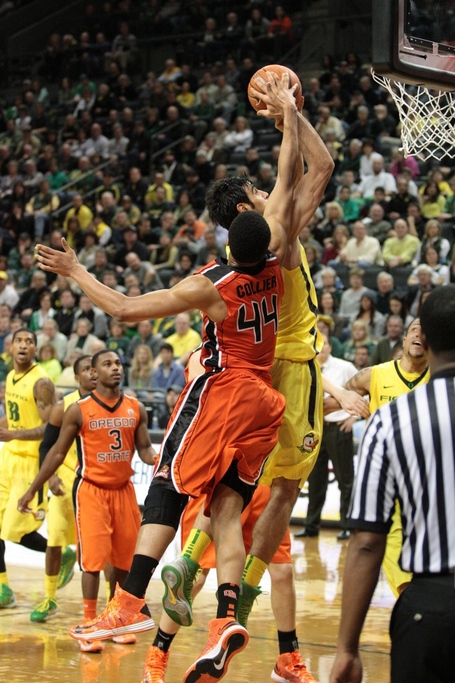 Kazemi, above scoring against Collier (photo by Scott Olmos, USA Today), recorded his 53rd double double, and his 12th this season as a Duck (after 41 at Rice), with 17 points and a game high 12 rebounds, and Woods was right behind, with 16 points. Loyd added 12, and also had 4 steals and 3 assists, and Singler added 9, but also added 6 assists to the Oregon ledger.

Both teams will now have a week off, before they make the Rocky Mountain trip to finish the regular season. Oregon St. visits Utah next Thursday, and proceeds on to Colorado Saturday, while Oregon reverses that route.