California hung on to hold off Oregon St. down the stretch, and pulled out a 1 point win which spoiled senior day for the Beavers' Joe Burton, and came despite a tremendous effort on Burton's part.

After an emotional pregame ceremony that honored Burton as Oregon St.'s only graduating senior, "Big Joe" proceeded to almost will the Beavers to a win. Burton not only led Oregon St., with 15 points, he added 9 rebounds, including a game high 6 on the offensive boards, a game high 7 assists, and a game high 5 steals, plus a couple of diving saves.

The game began oddly, with Allen Crabbe, the Pac-12's leading scorer at the free throw line, after a technical foul was assessed on Olaf Schaftenaar for illegal rim contact in warmup layup drills, a call made from in the hallway leading to the floor. Crabbe surprisingly made only 1 of 2 free throws, a harbinger of things to come in more ways than one.

Oregon St.'s defense held Crabbe to only 5 points, and only 2 baskets after that. But that single point turned out to be as big as any scored the rest of the afternoon, equaling the margin of victory.

Despite the transgression, Oregon St. head coach Craig Robinson still started Schaftenaar (for the first time in his collegiate career), along with Challe Barton, with Ahmad Starks coming off the bench for the first time this season.

A combination of California's defense and some rushed off balance shots that ensued resulted in Oregon St. shooting less than 22% from the field in the first half, as the Beavers made only 8 of 37 shots before the break, and just 1 of 8 3 pointers. Consequently, California took a 22-8 lead, as Oregon St. needed nearly 13 minutes to break into double digits on the scoreboard, on a Devon Collier putback.

The Beavers had that deficit cut in half a minute and a half before halftime, on Roberto Nelson's 3 pointer, but Cobbs connected for the basket that would make it 29-20 California at the break, and Oregon St. couldn't score once again in an end of half situation. 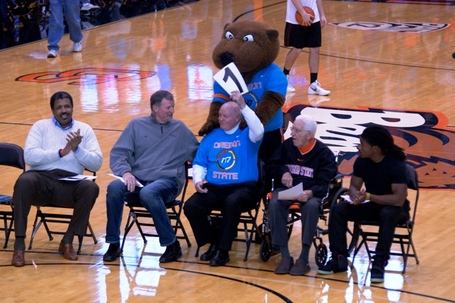 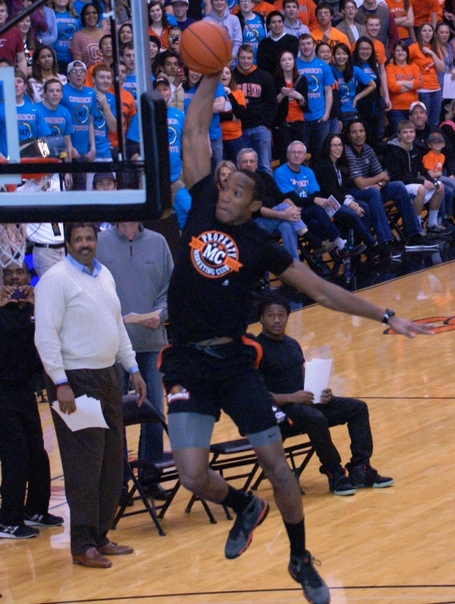 The Bears reopened their lead to 13 when the first 2 exchanges of second half possessions resulted in no points for the Beavers, and an ensuing basket on the other end. California enjoyed only 1 more lead that large, after Cobbs answered a Collier layup with one of his own.

Oregon St. then proceeded to fight their way back into the game, and after Burton's basket with 15 1/2 minutes left that pulled the Beavers within 37-28, the deficit was never again in double digits.

But every time Oregon St. got close, California answered. The Beavers got within 3 points for the first time on a 2 + 1 3 pointer by Nelson, only to have the Bears' David Kravish answer with a dunk, off a dish by Cobbs. Burton pulled Oregon St. within 45-42, but Brandon Smith buried a 3 pointer, and Cobbs then reopened the lead to 8. 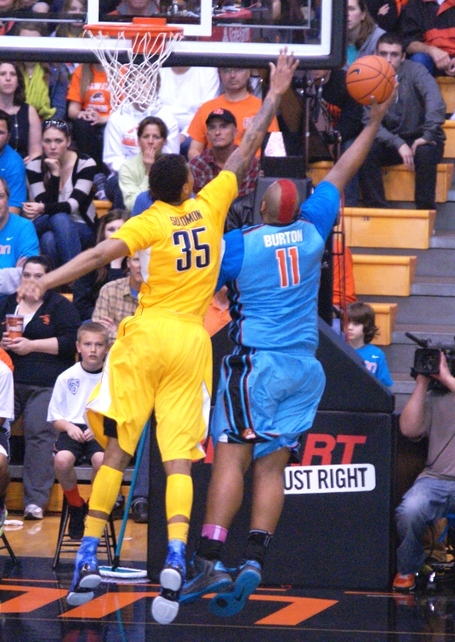 The Beavers battled back withing 4 points time and again, and were down only 55-51 with just over 3 minutes left on another basket by Burton. But Cobbs answered with a 3 pointer, and it was Cobbs, below shooting over Starks, that scored Cal's last basket with 1:22 to go. 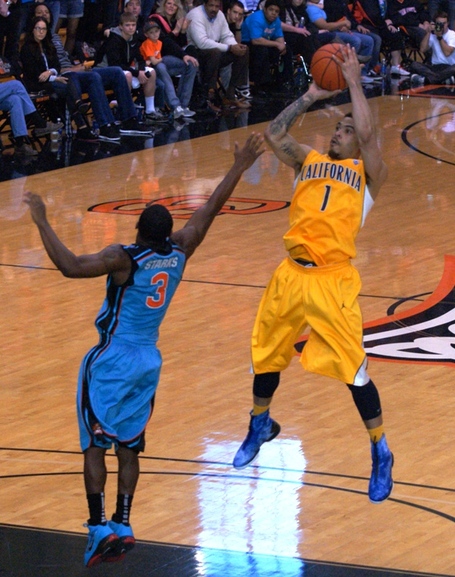 4 Collier free throws made it a 1 point game with 43 second left, and after a time out, California elected to run as much of the remaining clock off as possible. Cobbs eventually took the shot, and missed, with Burton grabbing the rebound.

Starks, who had shaken off a game and a half long scoreless drought with a pair of 3 pointers that were instrumental in the Oregon St. comeback, took the inbounds pass from Burton, dribbled to the left elbow extended, and took the shot for the win, but came up airball short, and California, who defeated Pac-12 leading Oregon on a Cobbs basket with .7 seconds left Thursday, had their 5th win in a row, and 7th in their last 8 games, a stretch of success that started with the Bear's 3 point 71-68 win over the Beavers back on Jan. 31 in Berkeley. 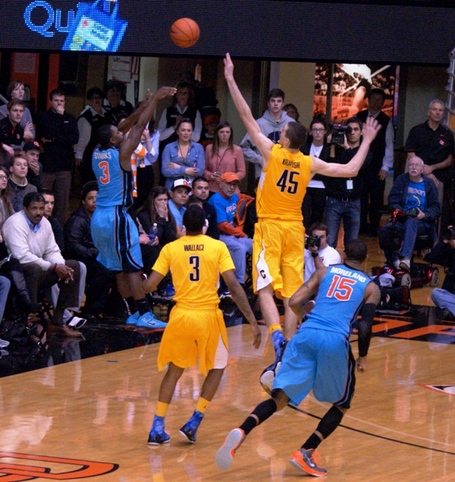 Ahmad Starks attempts the shot that would have won the game, but had to shoot over David Kravish.

"We just called a play that we have at the end of the game," Robinson explained. "When you only have that much time you have to put the ball into only a couple of people's hands who can shoot off the dribble and that's Ahmad (Starks) and Roberto (Nelson) and they (California) were completely full-fronting Roberto, so we knew they were going to let Ahmad get it, and he was going to have to come up and pull-up to shoot a shot."

The Bears were hardly Golden offensively this weekend, but their defense allowed them to complete a season sweep of Oregon St. while having outscored the Beavers by only 4 points. The win also completed a season sweep of the state, by a total of 10 points.

With Crabbe almost completely throttled (the Beavers held him 13 1/2 points under his Pac-12 leading average), and California's Richard Soloman and Robert Thurman struggling physically against Burton (Thurman fouled out in 11 minutes in relief of Soloman, who was overmatched by the bruising Burton), is was Cobbs who came through with a game high 18 points, and a surprising dose of Tyronne Wallace, the only other Bear in double figures, with 11, that made the Bears Golden. 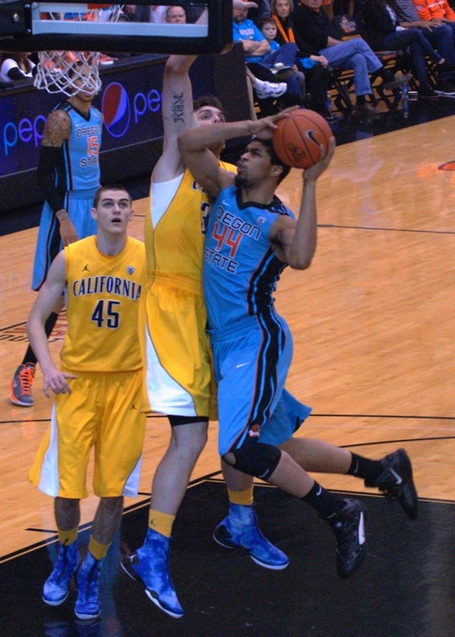 Collier, above, came off the bench for the Beavers for 13 points, but Nelson, the Beavers' leading scorer, struggled, shooting only 3 of 11 from the field, and making only 1 of 5 3 pointers, and finished with just 10 points.

Moreland had a game high 14 rebounds, and 3 blocked shots, but managed only 8 points.

California improved to 18-5, and 10-5 in the Pac-12 with the win, and is now squarely in the race for the regular season championship, having pulled within 1 game of conference leading Oregon and Arizona, and that with the tiebreaker in hand against both.

Oregon St. fell to 13-15 for the season, and 3-12 in conference, leaving them in 11th place heading into Thursday night's Civil War showdown with Oregon (22-6, 11-4) at Matthew Knight Arena. The Ducks bounced back from their loss to the Bears Thursday night for a 77-66 win over Stanford, a victory that kept them atop the conference, as they hold the tie-breaker over co-leader Arizona, and also averted what would have been a sweep of the state by the Bay Area. 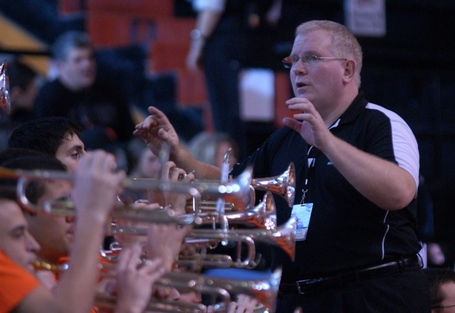 The game was also the last home men's basketball game with the band under the direction of Dr. Brad Townsend.

Townsend, a Pennsylvania native, will be leaving Oregon St. this summer to take over as Director of Bands at Pittsburgh University. Robinson and football coach Mike Riley have acknowledged repeatedly the roll the band plays in creating the atmosphere that allows the Beaver Dam, and Beaver Nation generally, to be a force and a factor in games. In 11 years as the Director of Athletic Bands, Townsend had more than doubled the size of the band, increased the appearances of the pep band, and developed the marching band into a top 5 program.

Townsend was also acknowledged before the game for his contributions to Oregon St.

The loss, likely the last appearance at Gill for Burton, was especially disappointing, but numerous fans from the crowd of 6.034, lingered to thank Joe. 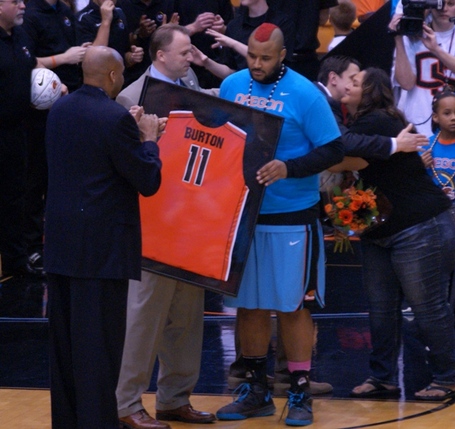 "Where do I start?," Robinson said. "All of you know how dire the situation was when we first started here and Joe signed on almost immediately. We had to win him over but it starts right there. Kids nowadays want to go to programs that are already established because it is just an easier road. Joe could have gone to a lot of places that have had better recent history and he chose to come to Oregon State and he chose to play for me. He has just gotten better every single season and I know he claims that he didn't start listening to me until two-and-a-half years in, but he started listening before then. He just listened more later and that is a tribute to him because not everybody is going to have a chance to play professional basketball and not everybody is going to have a chance to be an investment banker. What you want to do as a person is to grow, especially during your college years, and he has grown into a man. It is just heartwarming, on and off the court, and I am just happy to be a part of it." 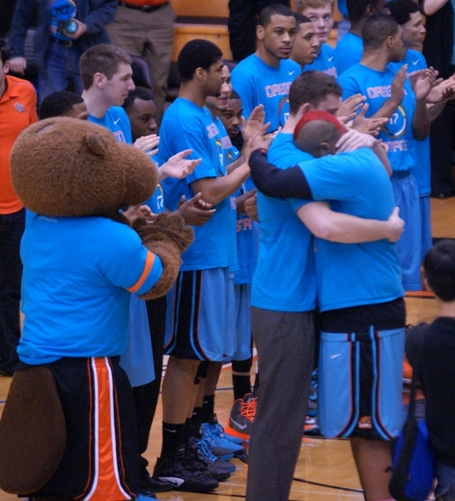 Joe Burton gets a hug from Angus Brandt. Burton and Brandt entered the program together, as Craig Robinson's first recruits.

"I am feeling good," Burton added. "We battled back during the 40 minutes. It is Senior Day and an emotional day with my family. It was great to have the team behind my back. I told the team before that win or lose, just play a hard 40 minutes and that is what we did. It is all I can ask them for and I am grateful." 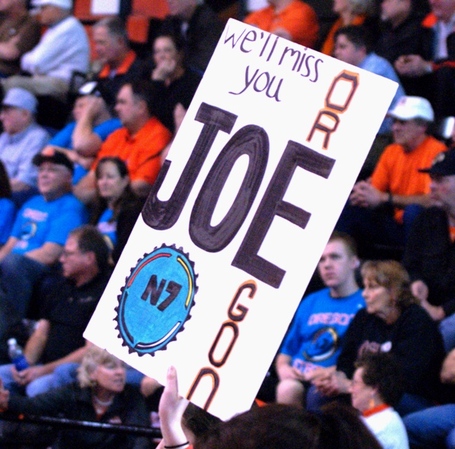