Stanford Pulls Away From Oregon St. For 10 Point Win

Share All sharing options for: Stanford Pulls Away From Oregon St. For 10 Point Win

After a close, competitive, and highly entertaining game most of the way, Stanford pulled away down the stretch, with the 10 point margin of their win over Oregon St. the largest margin of the game.

It was 56-54 Stanford after Eric Moreland's dunk half way through the second half, but then the Oregon St. offense completely came to a halt, save for Roberto Nelson. Nelson was the only Beaver to score for over 6 minutes, until a pair of Olaf Schaftenaar free throws, and had 13 of the last 18 Oregon St. points.

Meanwhile, the Cardinal's Dwight Powell found his groove, and joined Josh Huestis in leading Stanford to a strong finish, punctuated by a rebounding effort that more than erased a 10 rebound deficit on the boards, that gave the Cardinal their second consecutive season sweep of Oregon St.

"We came into halftime, and coach told us we were down by 12 rebounds,'' Huestis said. "We pride ourselves on being a hard-working, rebounding team. Dwight and I took it to heart.''

It was also the 9th time this season the Beavers have lost a conference game after leading at halftime.

"I feel bad for our fans and Beaver Nation," Oregon St. head coach Robinson said. "We got out played and out hustled, and I was really disappointed in our play on the boards. It was just completely unacceptable. There was a level of carelessness out there, and I'll address it before the next game."

Joe "Mohawk" Burton (Oregon St.'s lone senior was sporting a brand new hair cut for the final home stand of his career) got off to a great start, with 10 of the Beavers' first 15 points, but Stanford's Chasson Randle matched Burton's dozen first half points with 12 of his own, making 5 of his first 6 shots. The Cardinal really needed it, as Powell picked up 2 early fouls.

Oregon St. finally executed an end of half sequence well, as Nelson banked in a shot after driving the right side of the lane to put the Beavers up 35-34 at the break.

And a highlight reel over the head hook shot by Burton less than a minute into the second half put Oregon St. up 37-36. It was the last time the Beavers would lead, though, as Stanford answered with a 7-0 run, forcing Robinson into an earlier than desired timeout.

It looked like it would pay off, as Burton and Nelson put together a 5-2 response, and Powell picked up another foul. 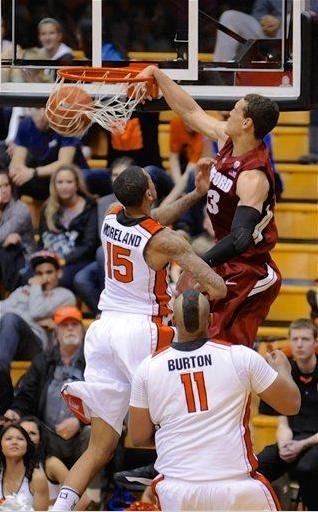 But Powell, above, and Huestis answered with a 4-0 run of their own, and Oregon St. would spend the rest of the evening trying unsuccessfully to ever get over the hump.

Stanford's Andy Brown got a 2 + 1 3 point play while drawing the 3rd foul of the night on Burton, and getting the basket on a goal tending call on Moreland with just under 12 minutes left, opening a 54-49 Stanford lead. 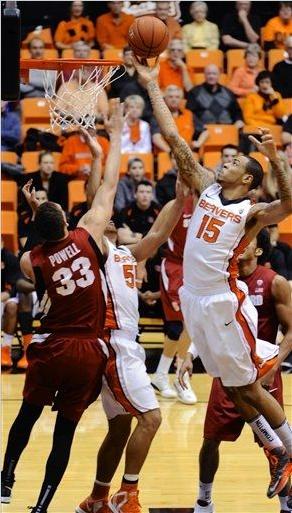 Nevertheless, Oregon St. made it interesting, as Nelson's basket pulled the Beavers within 73-69 with 2:46 left, and Moreland, above, came up with a block and rebound, fouling Randall out in the process a half minute later.

But Moreland missed the front end of the 1 and 1, and Aaron Bright answered by burying a 3 pointer. Moreland turned the ball over with a curious piece of ball handling, and Powell's dunk made the margin too much to overcome, sending the small crowd for the exits early.

Despite discounted ticket prices for fan appreciation night, a less than half full crowd of only 4,649 turned out for the latest late, post 8 PM weeknight start.

Nelson finished with a game high 28 points, notable given he was only 1 of 9 on 3 pointers, including one late that missed everything, and by quite a bit.

"I'll take some of the responsibility for Roberto's poor 3 point shooting," Robinson said. "We got down on the shot clock at times. And then, when we got behind, Roberto felt he had to force up some shots."

Burton, who played on despite becoming ill on the floor late in the first half, finished with 16 points, 8 rebounds, and 4 assists, and Moreland had his 10th double double of the season, with 11 points and 11 rebounds, to go with 3 blocks. It was only the second time this season that Oregon St. has not won when Moreland has posted a double double.

But the big problem for the Beavers was Ahmad Starks, who went scoreless. Starks took only 2 shots, and it wasn't as though he was distributing, as he had only 3 assists.

"I don't know what was going on with Ahmad," Robinson said. "I've never seen him miss left like he did a couple of times there."

Meanwhile, the Stanford starters were the picture of balance, with all 5 in double digits. Huestis, above dunking, led the way, with a 20 point, 11 rebound double double, and Powell recovered from his early foul trouble to also post a double double, finishing with 14 points and 11 rebounds. Randle and Brown both added 13, and Bright had 12, to go with his 6 assists.

"I think everybody knows what the problem is,'' Burton said. "Rebounds, second-half points. We did good in the first half, kept them off the boards, and I guess we just got comfortable, and they just came out harder than us.''

Stanford (16-11, 7-7) will attempt the Oregon double double, trying for a season sweep of conference leading Oregon Saturday evening to go with their sweep of the Beavers.

Oregon St. (13-14, 3-11) will wrap up their regular season home schedule Saturday afternoon at 3 PM, starting with a pregame sendoff for Burton, the lone graduating senior this year (Angus Brandt, the other senior is redshirting, and will return next season).

The Beavers will have their hands full, with a red hot California (17-9, 9-5) team coming in. The Bears beat the 23rd ranked Ducks 48-46 tonight at Matt Court, on Justin Cobbs' basket with 1 second left. California has now won 4 in a row, and 6 of their last 7 games, starting with a 71-68 win over Oregon St. in the teams' first meeting. The Bears' golden run includes 3 wins over ranked teams, 2 of them on the road, plus a sweep of UCLA and USC.