Hopes are running high as Oregon State baseball is picked to finish in the top half of the conference and starts the season ranked in the top ten. Will the Beavers be able to capitalize on a strong returning class of players and make a serious run at Omaha for 2013?

Share All sharing options for: Batter Up! Previewing the 2013 Oregon State Baseball Season

Here we are again! Oregon State baseball is about ready to take the field for their first game this Friday, February 15th against Utah Valley in the Palm Springs California tournament. Time to look back a bit and to look forward to the 2013 OSU baseball campaign.

As for the opening series, the Beavs should get some nice looks at the new guys against Utah Valley, Gonzaga, and UC Riverside in the Palm Springs Tournament. The series takes place over the February 15-18th weekend. After this four game series, the Beavs visit San Diego State for four games before returning to Corvallis for the opening home series against Bryant starting on March 1st. Overall, they have a fairly easy non-conference schedule that sees the Beavs only playing one preseason ranked team, the San Diego Toreros at the end of March, which is an interesting three game series on the road after playing two conference series against Arizona and Arizona State.

Baseball tickets are for sale!

"I like the fact that you have, even a guy like Michael Conforto, who's just a sophomore but I mean he played such a significant role on our club last year'' Casey said. "He provides leadership that's completely different from the type that maybe Matt Boyd or Taylor Starr would, with their experience." (Oregon Live)

To look forward to the season I have been thinking about the following areas of question: Defense and Pitching, Offensive Production, Senior Leadership, and Pac Conference Title Chances.

As always, Pat Casey OSU baseball really begins and ends with its pitching and defense. This year we see a strong returning core of players (see "Senior Leadership" below) within the pitching rotation as well as on the defensive side of things.

A key question is the starting rotation for the Beavs, as it looks like Jace Fry is out for the season, after having "Tommy John" shoulder surgery. Casey has indicated that Matt Boyd (2012 ERA 3.71 and Taylor Starr (2012 ERA 3.80) could both be ready to be starters. This would complement well with Ben Wetzler (3.39) and Dan Child (2.75) if both starters from last year can continue to impress. And as always, there could be a new starter in the wings such as hinted at by Coach Casey with Freshman RHP Andrew Moore.

"(Freshman) Andrew Moore's had a good fall for us – he could start.'' (Oregon Live) 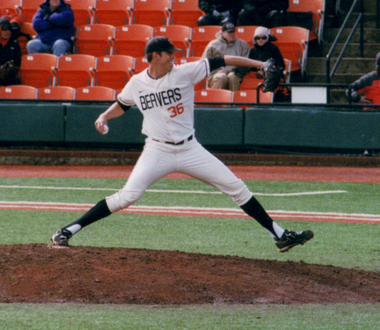 From the bullpen, Scott Schultz (2012 ERA 2.92) really showed some excellent stuff at the end of the season, and the hope is there that Schultz can help form a solid core to the bullpen, and maybe even become a needed starter at certain times. Along with Dylan Davis, Zach Reser, Carlos Rodriguez, and Tony Bryant, there is an indeed strong possible core of returning pitchers.

A key question here though is how will these returning players, along with the new arms coming into the program, all fill into certain important roles? One of which is the strong closer that we have seemed to have missed over the last couple of seasons?

Seven Pac-12 baseball players have been named to the initital [sic] National Collegiate Baseball Writers Association Stopper of the Year watch list, the NCBWA announced Friday. The list, which consists of 75 players, marks the organization’s first step toward identifying the top relief pitcher in NCAA Division I baseball. The Pac-12’s seven representatives on the watch list are tied for the most by any conference.

As for defense, my personal expectation is that with once again this Pat Casey fielding team will be excellent, and I see no reason to expect anything but an increase in defense productivity with this returning core of players. 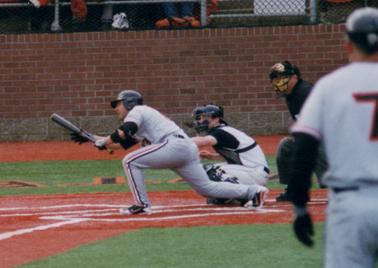 On the offensive side of the game, the question is will the Beavs be able to mix a solid bit of small ball with returning starters such as Tyler Smith (2012 average .350) and Ryan Barnes (.277) with some extra bit of power provided by Michael Conforto (.343 and 13 HRs) and Danny Hayes (.317 and 5 HRs)?

[Update (2/13/13): "Ryan Barnes, he may be our best all-around player but right now, we’re not going to have him,” Casey said. “He broke his hamate bone and is out four weeks." (Corvallis Gazette-Times)]

Last season was a breakout type of year for Pac-12 Freshman of the Year Conforto and it will be a challenge this year for him to stay ahead of the scouting of the other teams. What could be essential here is another new player stepping up like Conforto did last year. But who will that be? Freshman Gabe Clark and JC recruit Jerad Casper look to have some possible potential to bring in more offensive punch. I would also throw into this conversation the possibility of someone like Kavin Kayes and/or Jake Rodriguez finding their batting potential and helping out the offense line-up to be a solid one all the way top to bottom.

This one goes a bit with the two defensive/pitching and offensive areas above, but this season sees one of the more stacked rosters, given the returning players to the team. In a rare occurrence in college baseball we have a team that did not see a lot of defections to the MLB draft. As such, we have returning players Matt Boyd, Taylor Starr, Cole Brocker, and Tony Bryant coming back into the pitching rotation; and also we see the return of such key players as Ryan Barnes, Tyler Smith, Danny Hayes, and Max Gordon. Added to this is an equally strong returning Junior class.

In the past I have been much more curious about the younger players, and who will step in to fill the graduated and drafted leadership--and this is still of great interest--but overall this year I think a key reason for the high rankings and recognized potential of this team lays on the shoulders of the veterans. Will this translate into a a perfect storm of strong returning leadership with some up-and-coming young stars? Will the returning players have issues with opposing conference teams who are now used to what they bring? Some key questions this year for sure here, but some very exciting potential.

The Beavs have a pretty choice overall non-conference schedule, and as in the past maybe a bit too choice, for the Pac-12 this year is loaded with preseason talent. Will the team be able to push into a strong conference schedule with a lot of momentum? The conference this year features five or six top 25 teams (depending on the poll) and some polls even having four teams in the preseason top ten. Ironically one of the lower ranked Pac schools is the defending National Champions Arizona Wildcats, who the Beavs open up conference play against in March.

A huge challenge though is that the Beavs will be playing the other main contenders Arizona, UCLA, Stanford, and Oregon all on the road. It will be important to sneak out some series wins in these series of course, but interpretative to control all the at home series, including hopefully a couple of series sweeps.

Again this year the overall consensus is that OSU, UO, UCLA, and Stanford all will all be competing for the conference championship; and this does not even put into consideration possible spoiler teams such as WSU, UW, Cal, and USC, with the always strong Arizonas somewhere in the middle. All of these latter teams have to be chomping-at-the-bit to improve on their overall performances from the last few years. It will be another interesting, and I would imagine back-and-forth conference season this year.

"I don't think it sneaks up on us at all,'' Wetzler said. "I think we've been eager and ready to go as soon as that last pitch was thrown at LSU. We didn't like the feeling that we had there.'' (Oregon Live) 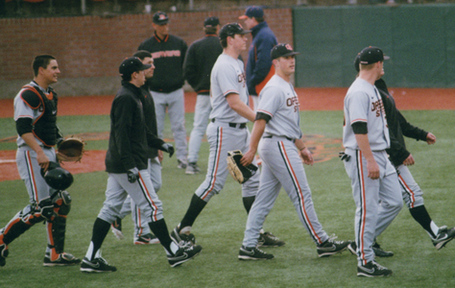 In general I feel that OSU has a wonderful opportunity to be an even better team this year from 2012. As noted above, the team is returning a solid group of players, and a group that looks to bring some swagger into their play from the outset. Non-conference play will of course be a time to test some of the new guys in the program, but I also see it as a time to really establish a strong winning tradition this year. The Beavs overall opponent strength is not up to what it has been in the last few years, but there is a lot of opportunity for the team to learn how to win as a team on the road, which again as noted above, is going to be hugely important when conference play starts.

I don't know with how stacked the Pac is this year if the Beavs can win the conference, but I think they have the talent to do that. At the very least I think the team has the needed components to end the season highly ranked, and all so importantly hosting both a Regional and Super Regional. And yes, in the end I believe this team has the potential to return to Omaha. It all looks to be aligning for another exciting Oregon State baseball season!

And if one has forgotten how exciting OSU baseball can be: