Share All sharing options for: Colorado Pulls Out Late Win Over Oregon St.

Colorado pulled out a come from behind 4 point win over Oregon St. Sunday night, as the Buffs out-scored the Beavers 13-5 in the final 4+ minutes, with Spencer Dinwiddie accounting for 9 of the 13.

The defending Pac-12 champions demonstrated why they are again contending for the conference title and an NCAA berth, whereas Oregon St. is tied for last place, as the Buffs capitalized on opportunities while the Beavers suffered too many mistakes in the competitive and entertaining contest between teams that weren't that different.

Colorado was 7 of 8 at the line in the last 1:41, including 6 of 6 by Dinwiddie, capping a game long trend, where the Buffs made 18 of 24 free throws, while Oregon St. was only 7 of 8 in the game, and took only 3, all by Roberto Nelson after being fouled shooting a 3 pointer, in the last 14 minutes of the game.

But while a long ledger of missed and messed up calls that hampered both teams, but the Beavers got the worst of, can (and should) be looked at, as head coach Craig Robinson pointed out postgame, you can't point first at officiating when you lose the game and also lose the turnover battle 21-9, as happened tonight.

"We would work hard defensively, and make a great stop, and then go down and throw the ball away," Robinson noted.

As a result, Colorado held a 21-4 edge in points off turnovers.

Oregon St. also messed up end of half situations in both halves, something that's become a chronic problem.

The Beavers had to settle for a long 3 pointer that came too late for anything to be done with the offensive rebound before halftime. This despite having the ball for 37 seconds, and 17 after taking a timeout. At the end of the game, down 4 with 15 seconds left, Oregon St. never got a good look at the basket, and there was less than 4 seconds left when a contested tip up in traffic amounted to the only thing close to a shot. This despite having time outs left.

Colorado Starts Fast, Only To Get Shot Down By Starks

Colorado coach Tad Boyle shook things up, inserting Sabatino Chen, below, into the starting lineup in place of Xavier Johnson, and it paid immediate dividends, as Chen connected on a pair of 3 pointers, and the Buffs bolted out to a 19-6 lead. Oregon St. had good defense on the ball, but with good ball movement, Colorado often found an uncontested shooter to be only a pass or two away. (Another chronic problem the last couple of seasons for the Beavers.) 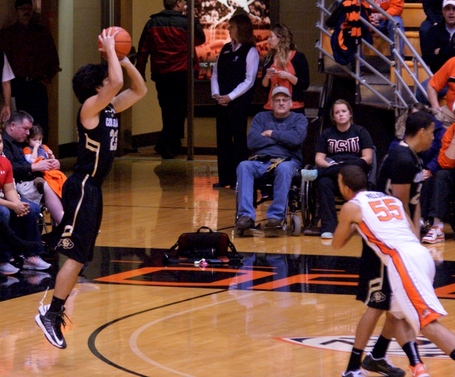 Ahmad Starks was primarily responsible for pulling Oregon St. back into the game, making 6 jump shots in the first half, 5 of them from 3 point range, including the one that tied the game at 31 apiece, and the one that put the Beavers ahead 34-33 at the break.

Nelson, Dinwiddie Duel In Second Half

Colorado adjusted at half time, shutting down Starks, who hit only shot the rest of the night, but Nelson, below, who had only 4 points in the first half, came to life, with 17 of his team high 21 points. 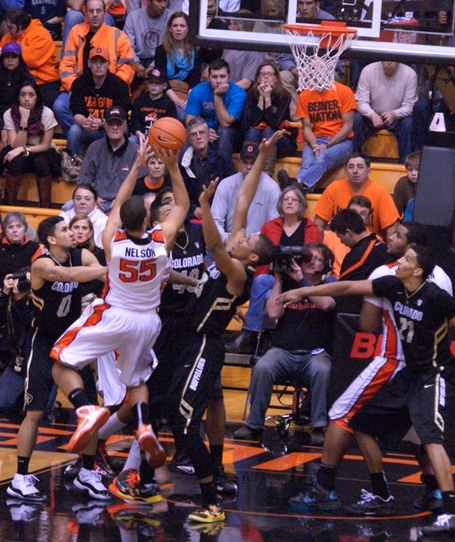 Part of the problem for Starks was the return of Dinwiddie, who sat out most of the first half with foul trouble, but went wire to wire in the second half, and had 17 of his game high 24 points, including the basket below, as well as locking down Starks defensively. 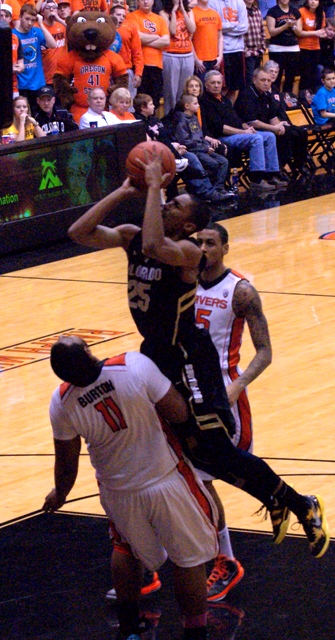 Joe Burton, below, had another strong game for Oregon St., posting a 15 point, 12 rebound double double, including 8 offensive boards. It was Burton's third consecutive double double. 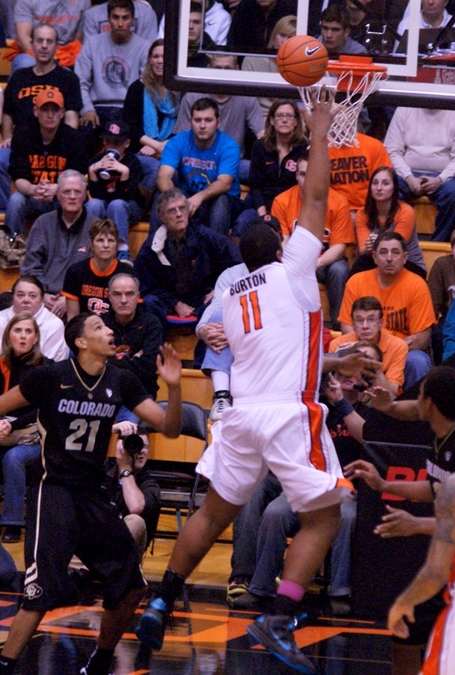 "Joe was a stalwart for us again tonight," Robinson said.

And the Beavers did a good job against Colorado's Andre Robinson, holding the nation's leading rebounder to just 10 boards, and only 7 points, both numbers materially below his average. 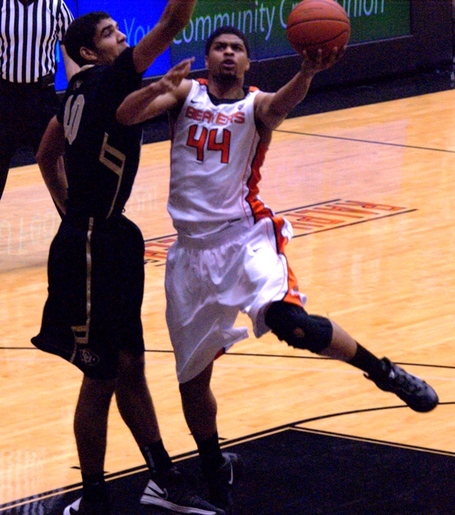 But another crucial difference in the game was Colorado's Josh Scott, who made 7 of 10 shots, good for 17 points. Meanwhile, though Devon Collier passed the 1,000 point mark in his Oregon St. career, above, he finished with only 6 points. And though Eric Moreland had an active night, with 7 rebounds and 3 blocked shots, he added only 1 point.

It wasn't enough support for Burton inside, and it proved fatal to the Beavers' hopes, especially when Challe Barton took only 1 shot (though he made it), and the only production besides' Moreland's single point off the bench came when Olaf Schafenaar made 1 of 2 3 pointers.

Despite one of the better contests of the season, and one of the better opponents, another less than half full Gill Coliseum crowd of only 4,819 turned out, including a Beaver Dam section that could only be charitably described as 1/3 full, to see it.

Especially with the Pac-12 channel not being as widely distributed as FSN was, the conference's shift to odd night and late week night games that was aimed at increasing exposure has in fact accomplished just the opposite, and led to more time off campus, and increased travel costs as some teams try to compensate for the long layovers that the scheduling has resulted in.

Beavers Hit The Road While Conference Race Heats Up

The loss dropped Oregon St. to 12-12 for the season, and 2-9 in the Pac-12, tied with Utah and Washington St. for 10th place in the conference, 6 games out of first place with just 7 to go. The Beavers visit the Cougs Wednesday night to start their state of Washington trip, and will finish the regular season with 5 of their last 7 games on the road.

Colorado's win capped a sweep of the state of Oregon for the Buffs, who improved to 16-7 for the season, and 6-5 in the Pac-12. Coupled with Arizona's upset 77-69 home loss to California tonight, the Buffs are tied with Stanford, California, and USC, who downed visiting Washington 71-60 tonight, for 5th in the conference, but the 4 teams are only 2 games behind the 3 way tie for first among the Wildcats, Oregon, and UCLA, with Arizona St. alone in 4th. 1 game back.