For the first time ever, Notre Dame sent a team to Corvallis on Sunday. It was their second ranked unbeaten women's basketball team, which just happens to have been to the Women's NCAA Final Four the last 3 years in a row. It was also the highest ranked non-conference opponent to ever visit Corvallis in one of the major team sports.

Despite that impressive resume, the Oregon St. women weren't intimidated, and even shoo-in future Hall of Fame Irish coach Muffet McGraw would admit that the Beavers outplayed her girls most of the game.

But most of the game isn't long enough against elite competition, and it wasn't Sunday afternoon either.

Oregon St. controlled most of the first half, and opened a 33-26 lead, their largest of the game, less than a minute before halftime on Ruth Hamblin's layup, her second consecutive basket.

But Notre Dame answered with a 5-0 run, on a basket by Kayla McBride, followed by McBride's steal off Sydney Wiese, which led to Madison Cable's 3 pointer 4 seconds before the break. 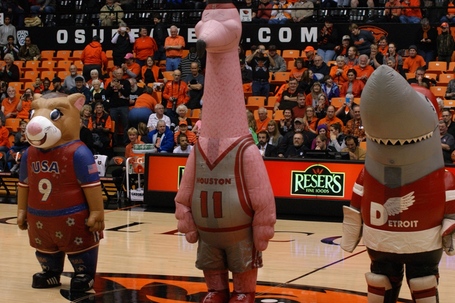 After a halftime that featured appearances by the Zooper Stars, above, the Irish ran off another 6 points to start the second half before the Beavers could recover, and the effective 11-0 run took Notre Dame from being in danger of getting blown out to back in control of the game,

Oregon St. did take the lead back, on Jamie Weisner's jumper at the 16:25 mark that made it 39-38 Beavers, but that would be their last lead of the game.

Another Weisner basket 3 minutes later tied the game at 41 apiece, but Notre Dame would lead the rest of the way.

The Irish weren't able to distance themselves though, and only opened a 54-48 lead with just under 7 minutes left, on a basket by Jewell Lloyd, for what was their largest lead of the game to that point. 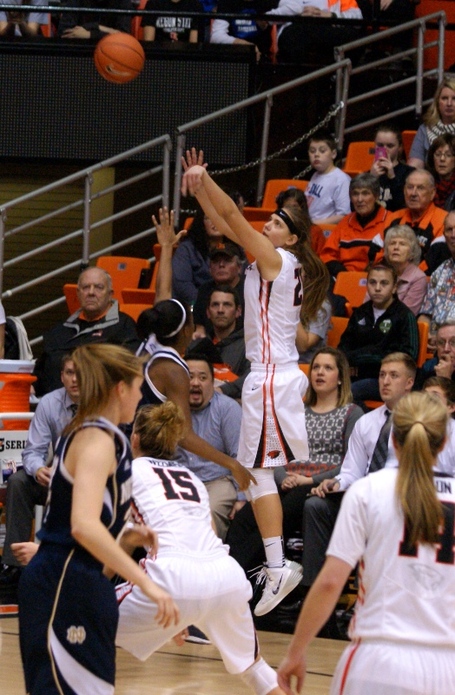 Weise answered with a 3 pointer though, above, and another Weise trey pulled Oregon St. within 58-56 with still 5:19 to go.

The Beavers wouldn't score from the field again though, and Notre Dame went on a 12-2 run down the stretch, with Oregon St. getting only a pair of Ali Gibson free throws the rest of the way, stunning and silencing the crowd of 4.032 (below) that turned out for the first ever meeting in women's hoops between the teams. 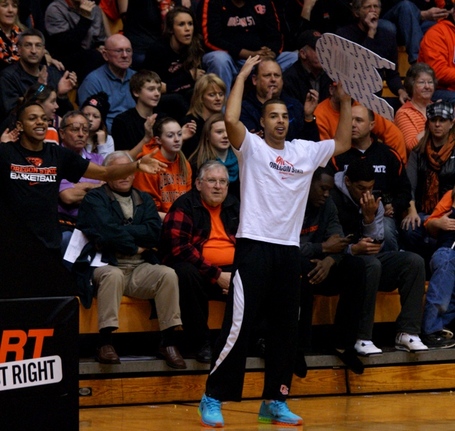 "We had a lot of turnovers down the stretch. We totally could have won that game," Weisner said.

Cable's putback at the buzzer made the final score 70-58, as the Irish continued their season long stretch of winning every game by a double digit margin. A 10 point win against Michigan is as close as anyone has come so far this season, as Notre Dame has gotten off to an 11-0 start. 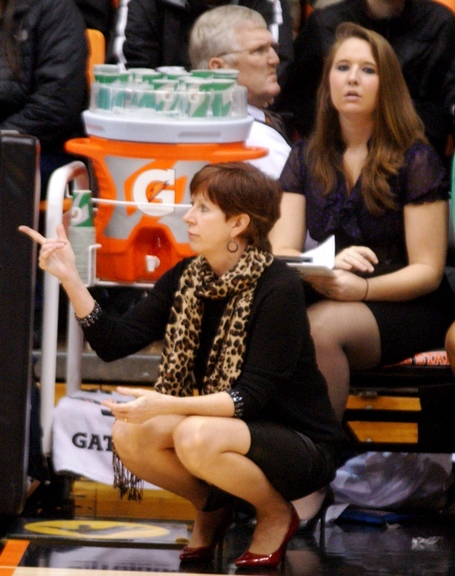 "This was a huge win for us," McGraw, above, said. "It's great to see how we responded to being behind, and having a close game at the end." 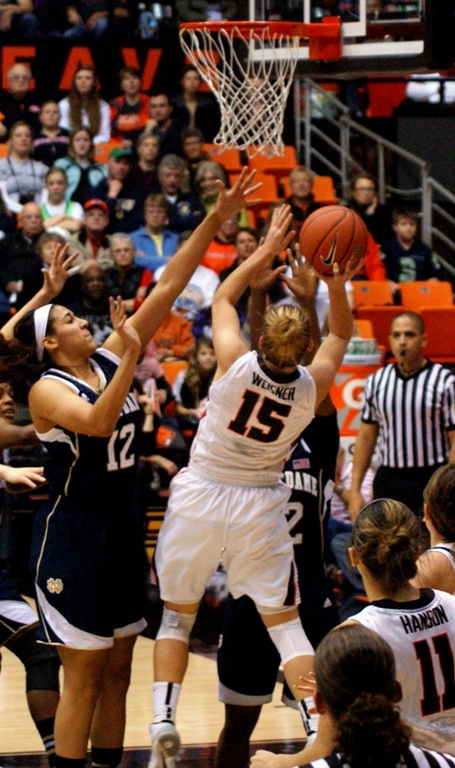 But it was Hamblin that was the player of the game.

Her 9 blocks tied the all-time Oregon St. record, and is also the most shots Notre Dame has had blocked this season.

Oddly though, Hamblin never got to the free throw line, as Oregon St. seemed to miss the opportunity to press the offense through their physically dominating post player.

Devon Hunter had 10 rebounds for the Beavers, but only 6 points. 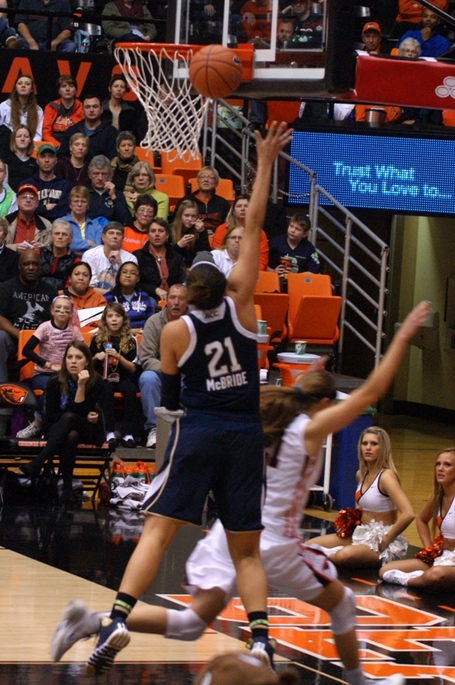 McBride, above, led everyone, with 20 points for Notre Dame, and 8 rebounds, while Natalie Achonwa added 16 points, and another 8 boards.

Loyd was also in double figures, with 10 points, but the Oregon St. defense held the Irish's leading scorer and last year's National Freshman of the Year 8 1/2 points under her average.

Notre Dame entered the game leading the nation in field goal shooting at 52.2 %, and 3-point shooting, at 44.9 %, but the Irish shot only 36 percent overall in the first half, and 1-for-6 on 3s, against the Oregon St. defense.

"Definitely credit their defense," McGraw said. "We got good looks, but we really missed the shots that normally we'll make."

Besides the runs around the halftime break and at the end of the game, there were 3 other keys to the game.

Though the Beavers generally defended well, they never were able to stop pick and pop 15 footers from around the free throw line extended. Several shots made from that play were all that kept the Irish in the game in the first half, all from the right side. After the break, McGraw flipped the offense at times, but though they fell from both sides, it was still the same screen action that Oregon St. never figured out an answer for.

Despite being at a size disadvantage, Notre Dame also dominated the boards, especially on the Oregon St. end of the floor. The Irish out-rebounded the Beavers 46-34, as Oregon St. only had 8 offensive rebounds.

The third problem, one Oregon St. coach Scott Rueck has to be especially concerned about, was the lack of bench support. The Beavers had no points, and just 5 rebounds and 1 assist off the bench.

The Irish, in contrast, got 17 points, 11 rebounds, 4 assists, a block, and an assist off McGraw's bench.

Oregon St. dropped to 8-4 at the end of their pre-season. The Beavers open Pac-12 action next weekend with the toughest trip of the year, starting Friday night at #23 California (7-3), and continuing Sunday at #4 Stanford (10-1).