OSU vs. Cal: Cruise control for Sean Mannion as the Beavs win 49 to 17

Oregon State controls the pace of the game on both sides of the ball to win 49 to 17 over the California Golden Bears. Brandin Cooks has a career night with 232 yards receiving yards.

Share All sharing options for: OSU vs. Cal: Cruise control for Sean Mannion as the Beavs win 49 to 17

In a first half it was the Sean Mannion and Brandin Cooks show.  Both Mannion and Cooks put up full game numbers in only a half of play, in which Mannion goes 21/29 for 315 yards and 2 touchdowns and Cooks catches 9 receptions for 197 yards with one touchdown and also scored on a fourteen yard end-around run, below. 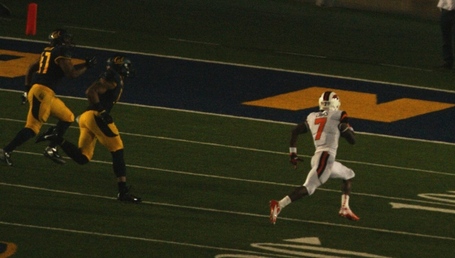 "I just saw a whole lot of green space, and ran for it." Cooks commented on his touchdown scoring sweep.

Oregon State got off to slow start though going three and out on their first possession after the defense held on Cal's opening drive.   For a good part of the first quarter it seemed like special teams play was the highlight for both teams, in which Cal wins much of the early field position battle after some nice plays by Beaver special teams players were nullified by personal foul penalties on OSU. 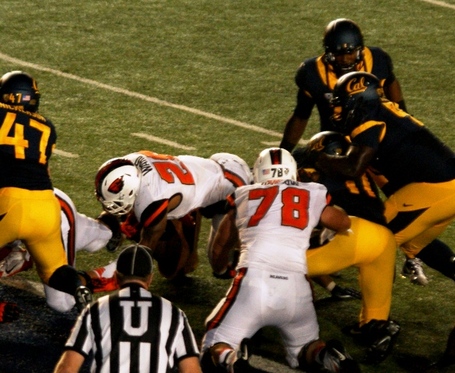 The Beavers scored first, on Terron Ward's touchdown dive, above, capping a 91 yard drive that is the longest so far this season. The OSU pass rush then picked up its game, as the defense held strong holding Cal to only a short FG on what looked to be a dangerous drive for the Golden Bears after a Jared Goff 42 yard pass play to Chris Harper. 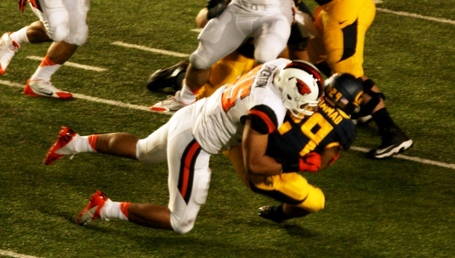 Scott Crichton had a very good first quarter getting into the Cal backfield for a key tackle for a loss, above, a sack to cause a fumble (that led to a OSU offensive touchdown), and Crichton also had two big batted down passes.

The second quarter opened with what looked to be another strong Cal drive, but the OSU defense stepped up enough, along with some key Cal holding penalties to force a long field goal attempt that was missed to the left.   Mannion then marched the Beavs down the field to convert a 4th and 2 for a fourteen yard Cooks touchdown run to go up 21 to 3.   From there the OSU defense played aggressive and started to fluster the young Cal QB, Goff, who started to get jumpy in the pocket leading to a missed 4th down pass attempt that allowed for another Mannion drive down the field capped off by a Cooks 34 yard screen pass touchdown to put the Beavs up 28 to 3.

It could have been worse too if Caleb Smith did not fumble it at the half yard line with under a minute to go in the half. Smith did score earlier in the first quarter though, below, but had an inexperienced kind of night, with a pair of false start penalties. 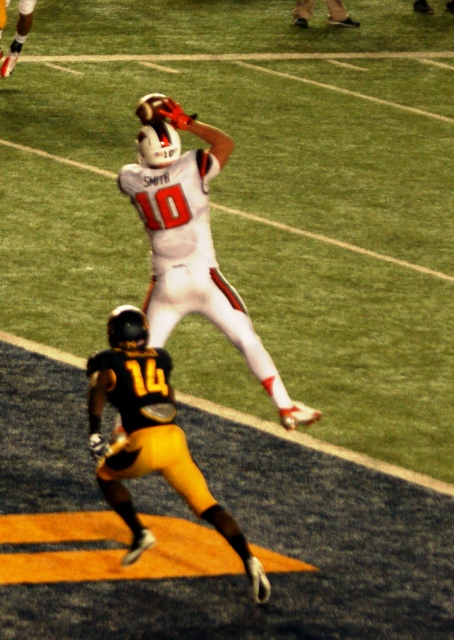 Still, the Beavs still took a comfortable 28 to 3 lead into the halftime.

The third quarter was more of the same as Oregon State took the opening possession down the field to score on a 28 yard touchdown pass from Mannion to Storm Woods, below. 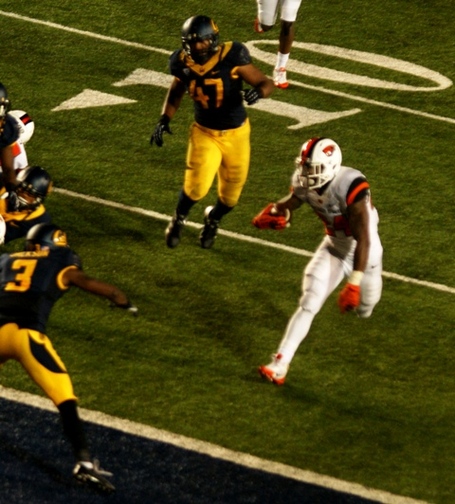 That capped what was a 70-3 run by Oregon St. under Mannion's direction in just under a game's time, since Washington St. took a 1 touchdown lead in the third quarter last week. 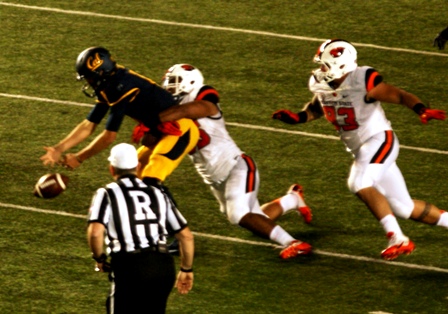 Jared Goff, above, then fumbled on the first play of the half for Cal but the Beavs could not capitalize and Cal found some spark by changing things up putting in Zach Kline at QB.  Kline was able to get the first Cal touchdown to close the score to 35 to 10.   Mannion though was not through and was able to put the score back up to 42 to 10 on a touchdown pass to Richard Mullaney, below, tying the single season Oregon St. record for touchdown passes in a season, 25, with Derek Anderson. 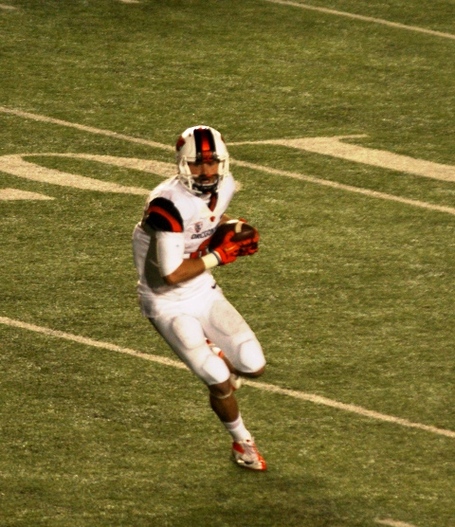 The fourth quarter saw a bit of drama with OSU holding Cal on a 4th and three, then OSU took one more shot with Cooks who almost pulled in another spectacular catch but went out of the game with an injury.  Oregon State though goes up 49 to 10 on a 4th down Terron Ward one yard touchdown run.  From there it was time for the backups as Cody Vaz took over at QB to finish the game out (Vaz goes 1/1 for 15 yards).   Cal did add one more touchdown for the final score of 49 to 17. 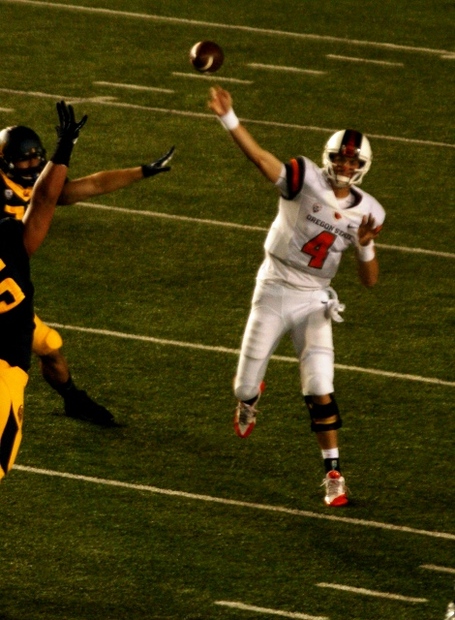 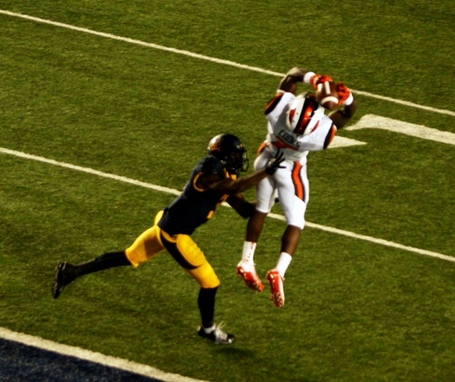 Storm Woods also chipped in nicely to the passing numbers catching 6 receptions for 63 yards and a touchdown (mostly on well designed screen plays).   The rushing game again was just enough to add small contributions such as Terron Ward's 9 carries for 34 yards and 2 touchdowns, and Chris Brown came in to run the ball for 36 yards on 6 carries.   Overall the Beavs outpaced the Golden Bears with 570 total yards to Cal's 366, and more impressive was OSU's 31 first downs to Cal's 19 and the Beavs controlled 33:28 of the clock.

It was a game that never really was in doubt, and as such was a refreshing change of pace from the previous closer hard fought games. It merited 8 "Hip-Hio-Horrays" by head coach Mike Riley in the locker room post-game.

That said, it did seem to be become a bit chippy at times and at times a bit unfocused for both teams, and Riley noted as much, calling the outing "good, but not great" afterwards.  In the end the OSU offense did what it does well and controlled their side of the ball with their dynamic passing game and the defense played a solid enough game overall to keep Cal well within check.  All in all it was a nice tune up game for what now becomes a true test of how well this Oregon State team has formed and rebounded after their shocking season opener loss.

The Beavs go to 6 and 1 overall and 4 and 0 in conference play, tied with Oregon for first place in the PAC-12 North, after .   They host Stanford next Saturday for another late night game.

The Bears dropped to 1 and 6 and 0 and 4 in conference play, and now have the longest losing streak against FBS opponents in the country, 11 games.

With their second consecutive blowout of the Bears, the Beavers have now won 6 of the last 7, and 12 of the last 15, contests against California.