Share All sharing options for: January 25 Baseball and Football Report

It's January 25, its cold an raining in Corvallis, and it's the first weekend without a football game at any level whose' outcome mattered since back in August. So naturally, its time to talk baseball and football.

It actually is the first day of official practice for baseball, but the Beavers, Ducks, Pilots, etc. will be mostly inside, where most preparation for Northwest baseball occurs. Once the season actually begins, which is just next month (Oregon St. opens in just 3 weeks, against Utah Valley St. in Palm Springs), the Beavers will expected to have a great season, and not just by the usual Beaver Belivers.

Oregon St. leads 5 Pac-12 teams, and 8 western teams, in the Pre-season Baseball America Top 25, at #6. College baseball fans are aware that there are almost as many polls as teams, but Baseball America is consistently one of the most accurate and respected, and the one BuildingTheDam turns to first.

North Carolina opens at #1, with Vanderbilt and Arkansas next in line. Louisville is a somewhat surprising #4, followed by Mississippi St., and then the Beavers, as the poll typically is southeastern US oriented, due to the weather advantages those programs enjoy.

The preseason baseball poll sees much more adjustment from the end of the prior season than, say football, as there is at least an attempt to assess the impacts of players lost in the draft or graduation vs. the quality of the returning players and recruits. 7 of the top 25 were not ranked at the end of the 2012 season. Oregon St. benefits from this, with most of their roster, and especially much of a stout pitching staff back.

Other western teams in the top 25 include New Mexico, at #21, perennial contender Cal St. Fullerton at #22, and San Diego, whom the Beavers will visit for a 3 game weekend series at the end of March, during their Pac-11/12ths bye week (Colorado doesn't have a baseball program, so its the Pac-11 for baseball, and each team has an open weekend in their conference schedule as a result), rounds out the top 25.

There is Football To Talk About

At least a little. As mentioned, there's no football this weekend where the outcome matters, but there is the Senior Bowl, and the NFL Pro Bowl, though unless the game comes closer to being a game, this might be your last chance to watch one, as the league is considering dropping the event unless the players can improve the product.

The Senior Bowl on Saturday does of course have an Oregon St. interest, as WR Markus Wheaton and CB Jordan Poyer, as well as several other Pac-12 players, are participating.

Wheaton has received rave reviews this week during practice, with both his speed and his burst impressing NFL scouts that are closely watching.

Unfortunately, the pass was still incomplete, so while Wheaton shook Trufant, the coverage was still effective. 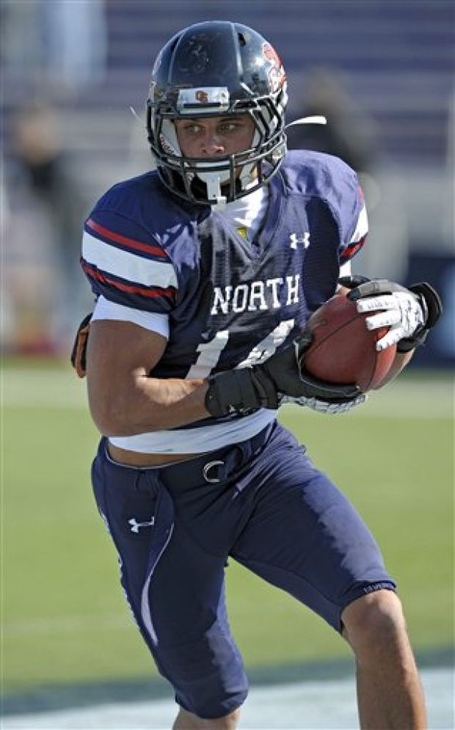 Poyer, above (Senior Bowl photo by G.M. Andrews) didn't impress as quickly, as scouts immediately noted what Pac-12, and for that matter, Oregon high school fans, have long known; Poyer does not have a tremendously quick burst. It's his football iq that has translated to on-field performance throughout his career, and a good showing in the game is where he can best make a jump in his standing heading towards the NFL draft. His ability to recognize and articulate scheme and coverage has been well received.

The game will be tomorrow in Mobile, AL, and will be aired on the NFL Network, starting at 3 PM CST (1 PM PST).

And there is a little track and field news this weekend as well, as the indoor season kicks off with the University of Washington Invitational at the Dempsey Indoor Facility in Seattle. The Oregon St. women's track program has a contingent headed up there, but unlike in recent seasons, none of the football players are going this time.3

Oregon St. at the moment doesn't anticipate fielding a partial t&f effort this season, as Obum Gwacham, noted for his high jumping ability, is using his red-shirt season for track this spring in order to preserve his eligibility, while concentrating on football, with the intent of improving his route running.

Wheaton will be pre-occupied with NFL preparations, with pro day and the NFL combine, and training for those events, to follow the Senior bowl.

Brandin Cooks, who has been highly competitive in both sprints and sprint relays, is also taking spring off from track, in order to continue rehab of his knee. The lingering effects of a serious bruise impacted him considerably in the Civil War, the Nicholls St. game, and when it continued to be an issue at the Alamo Bowl, Cooks has focused on getting his knee fully recovered before spring football practice.