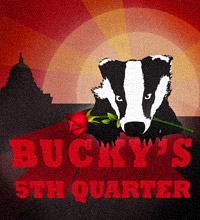 One of the things that sets primarily the Big 10 and the SEC and their members apart from lots of other teams and conferences is the total commitment to these teams of huge fan bases that go back to the beginning of both time and football (approximately the same thing). As a result, these teams also command a level of coverage that has no parallel elsewhere.

The good news for Beaver fans is there's more than usual to read about Oregon St.'s opener against Wisconsin, and their opponent. We talked with the MadTown Badgers this morning, but we also got to exchange thoughts with Mike Fiammetta of Bucky's 5th Quarter, Buildingtehdam's brother SB Nation blog that lives and breathes the Badgers.

You can read what Mike and the guys at Bucky's are wondering about, and our attempts at answers here.

Here are Mike's thoughts on the same questions we thought were most relevant.

Montee Ball clearly appeared to be suffering no ill effects from that concussion right before camp, rushing for 120 yards on 32 carries, and adding 31 more on 3 catches, including that impressive 4 consecutive carries for 24 yards and 2 first downs put the game away. The only thing missing was a really big play, yardage wise, with nothing over 16 yards. What will Wisconsin need to do to get the game-breaking play from him?

To get Montee going, it may be as simple as just having another opportunity. Ball talked earlier this weekabout running too upright against Northern Iowa, as well as not getting his feet up high enough [LINK: http://www.espnmilwaukee.com/common/more.php?m=49&post_id=10961] on inside runs. It all amounted to a somewhat surprising number of shoestring tackles, which played a significant role in his 3.8 yards-per-carry average (and, of course, the team's 3.6 mark).

You're right, though, in pointing out that stretch of four carries for 24 yards and two first downs. That is more "vintage Ball," as Bielema termed his whole outing in the post-game, and that's why it may just take another week or two to get Ball going.

Badger fans have to be pretty pleased with new quarterback Danny O'Brien, who completed 19 of 23 passes, for 219 yards and 2 scores, and with no interceptions. That 83% accuracy especially stood out. Did you expect that good of a performance? Can he sustain it?

Badger fans were indeed thrilled by O'Brien, who reminded many of Scott Tolzien, the quarterback of the 2011 Rose Bowl team. That means he was accurate, efficient and generally mistake-free. There was no reason to expect anything different from O'Brien, and also no reason to expect anything different moving forward. O'Brien connected with seven different receivers -- including Ball and fullback Derek Watt -- to show a comforting rapport with his new pass catchers.

It is worth noting, though, that Badger fans did taste post-Russell Wilson life, and it may not be what they expected. After all, Wilson's quick ascension to the top of the Seattle Seahawks' depth chart should show how exceptional of a quarterback he is. Wilson hit the ground running in his own Week 1 performance last season, completing 10 of 13 passes for 255 yards and two touchdowns, as well as rushing twice for 62 yards and another score against UNLV. Wilson might've very well been a one-time exception of truly dynamic scoring potential for Wisconsin's offense, but as long as O'Brien follows a similar mold to Tolzien's senior season, he should be fine. Of course, actually winning the Rose Bowl would make things even better.

Given those numbers, why didn't the Badger offense find a way to put enough points on the board to pull away? What will Wisconsin do differently to fix that this week?

Many of the early struggles look like they can be chalked up to a combination of rust and the play of an offensive line that is dealing with the loss of three starters. Center Travis Frederick spoke of the line just not getting enough vertical push, and you have to assume a Wisconsin o-line of all things won't struggle with that much longer. Plus, if O'Brien is sharp once again, it's fair to expect the running game will settle into place.

The defense kept Northern Iowa bottled up early, but the Panthers found some holes in the secondary as the game went on. What will coach Bret Bielema do to tighten up the pass defense?

While my answers above pointed to rust for the offense's struggles, mishaps in the secondary harmed the defense. That's perhaps the last thing Badgers fans want to hear after seeing their likely national title hopes dashed by last-minute Hail Marys in the Michigan State and Ohio State losses two weeks in a row.

Safety Shelton Johnson addressed Northern Iowa's success on wheel routes late in the game, something he admitted the Badgers hadn't worked on much in practice. He then followed up that comment by alluding to last year's breakdowns, yet another nod to those nightmare losses of 2011.

Of course, the secondary wasn't completely to blame, and Johnson wasn't the only player with an explanation for the struggles. Defensive end Brendan Kelly said it simply came down to a lack of focus, while Bielema pointed out linebacker Mike Taylor -- one of the Badgers' best players -- falling down on Northern Iowa's second long touchdown pass.

Clearly, there's no single answer, though you can expect a serious effort to be made on reinforcing the pass rush and secondary play in practice this week. If the issues subside over the next few weeks, all will be forgotten from Week 1. But if not, well, then it'll be 2011 all over again.

Is Badger Nation comfortable with that first game? They seemed a little jumpy having an FCS team, albeit a very good one, taking the Badgers to the wire.

Badger Nation was indeed very uncomfortable with the season-opener. I got the sense that many were unaware that Northern Iowa is a very good FCS team, though I suppose you can't really blame them. Last year's brilliance in the non-conference slate set expectations very high, even though Wisconsin nearly lost to Arizona State in Week 3 the year before.

What are you folks in the upper mid-west doing to assemble so many huge linemen? I count 15 offensive linemen on the roster that are well over 300 lbs., and tackle Rob Havenstein is 6'8", and 348 lbs.! There may not be any human beings in the state of Oregon that big!

That, my friend, is our bread and butter. The larger-than-life offensive line was once again well, large, last season, and it went along way toward quieting those concerns over Wilson's height (listed at 5-foot-11). Even after losing renowned offensive line coach Bob Bostad in the offseason -- in addition to those three starters -- preseason concern about the line was barely more than a whisper. You know what they say about death, taxes and Wisconsin's offensive line.

Finally, how many Badger fans will Beaver Nation be entertaining at tailgaters before Saturday's game? Oregon St. sent a good sized contingent to Madison last year, and except for getting drubbed 35-0, really enjoyed the trip, and are looking forward to extending a warm welcome to the Badgers. Will Wisconsin travel well to the west coast? Do you send at least a portion of that great band on the road? And will any of you from Bucky's be out to cover the game?

If there's one thing Badgers fans like more than beer, cheese and their football team, it's traveling to see that football team. Of course, it's not really hard to transport beer and cheese, though I supposed flying out west could make that more difficult. Don't doubt us though -- we are very crafty.

I think the band will be there, though admittedly, I'm not completely sure. Even worse than that lack of knowledge is the fact that none of us from B5Q will make it out there. Embarrassing, I know. We'll make up for it somehow.

Thanks Mike! Looking forward to Saturday even more now, if that's possible! Should be real interesting for all.