Share All sharing options for: Some Oregon State Basketball News 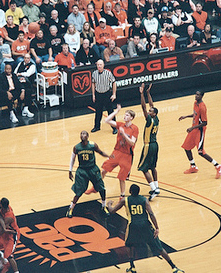 Yes I know we are talking basketball a bit early but thought I would put out there some recent basketball news while we wait for OSU's 2012 football (FINALLY) opener.

First on the news front comes the information that "OSU adds another Schaftenaar." Yes OSU basketball will be welcoming to the team this upcoming season the 19 year old brother of former OSU player Roeland Schaftenaar (to the right, from 2009). Olaf Schaftenaar at 6' 9" and 205 pounds looks to be an addition to an already pretty strong forward position, and will be joining two other freshman at that position: Langston Morris-Walker and Jarmal Reid. Personally this is fairly interesting for Roeland was pre-Robinson recruit and seemed to have some ups-and -downs with the Robinson transition, so on the surface this seems to bode well for Coach Robinson's reputation as a player's coach to bring in Roeland's brother.

Second bit of news comes this time from a former player and "Dallas Mavericks rookies Jae Crowder and Jared Cunningham are among a group of NBA rookies selected by an expert panel [Thirty-nine NBA rookies] deemed to be most overlooked in the 2012 draft class." Getting respect from his new peers! Though I wish he was getting it from his NCAA peers this season instead (sorry Jared just my personal Orange and Black feelings here)!

And finally some general team news and as previously noted here on the "dam" the team finished their summer Spanish trip 4 and 0. Plus on another good note: "Men's Basketball Schedule Features Every Game On Television." (If the Pac-12 and Directv ever reach an agreement, everyone will even be able to see most of them; 18 are on the Pac-12 Network.) Connor has the details.

Yes I know it could be a make or break season for many around Beaver Nation in regards to Robinson's time here, and I know we lost our star early to the draft, but all in all I'm excited about the way the program is building towards what could be a fun 2012-13 season.

That's all I got right now, besides: Go Beavs!