Are the "Bandits of Benton County" back? Dare we start again to speak the name reserved for only a few of the best defenses the Beavers have ever fielded? This defense still has a long way to go (like through 10 more games), and they did lose a couple of Bruin receivers, ultimately giving up 372 yards through the air, including a 65 yard touchdown seconds before halftime, but man can they play run defense! After holding Wisconsin's Montee Ball, the leading returning rusher in the country from last year, to 61 yards, Oregon St. proceeded to shut down 19th ranked UCLA's Johnathan Franklin, who started (but didn't end) the day as the leading rusher in the nation to just 45 yards. And the Beavers only allowed the Bruins to convert 2 of 15 3rd down situations.

Had Bruin quarterback Brett Hundley not got 25 yards on one scramble, UCLA would have been held below 50 total net rushing yards for the day, just as Wisconsin was.

Meanwhile, Markus Wheaton and Brandin Cooks were busy reminding the Pac-12 that while USC may have the best pair of receivers in the country, and there are another half dozen all-conference worthy wide receivers scattered around the Pac-12, they are a pretty impressive pair in their own right.

Wheaton made as good of a catch with the Bruins' Sheldon Price battling him tooth and nail for his 46 yard second quarter touchdown as anyone will all season. By the time Wheaton was done, he had 9 catches for 150 yards, a career high. And Cooks had 100 yards on his other 5 catches besides the 75 yard scoring sprint away from the UCLA defense that took 11 seconds to put an end to the only time the Bruins were able to pull even with the Beavers all day.

It wasn't all steak and lobster for Oregon St., or even In-And-Out burgers, which head coach Mike Riley treated the entire team to on the way out of Pasadena, but the Beavers, who entered the game as 7 1/2 point underdogs, did out gain the Bruins both through the air and on the ground, on their way to a 501 yard day, in a game in which they held the lead for over 54 minutes.

However, it was only because Hundley's pass took Shaquelle Evans out of bounds on the first play of the game that it wasn't UCLA who struck first, as Oregon St. had lost Evans, a problem that would arise again before halftime.

Instead, the Bruins went 3 and punt, and the Beavers proceeded to drive the length of the field. However, they bogged down in the red zone, when Sean Mannion led Cooks too far, and what should have been an Oregon St. touchdown on their first drive was just an incompletion, and the Beavers had to settle for a Trevor Romaine field goal, and a 3-0 lead.

Penalties would plague Oregon St. early, and both the leg-whip call on Grant Enger that cost the Beavers a touchdown, and the roughing the passer penalty on Rudolph Fifta that prevented UCLA from suffering 3 and punts on their first 3 possessions were good calls. And as a result, a first quarter of domination, and that 3-0 lead that should have been a double digit advantage, was almost wiped out by one good 46 yard Hundley completion to Evans on the first play of the second quarter.

Fortunately for Oregon St., the Beaver defense dug in, and limited the damage to a game tieing Ka'imi Fairbairm field goal, the one Mannion and Cooks erased on the next play. The slant route was a short, simple completion for Mannion, but Cooks proceeded to torch the UCLA secondary, who had no one who could even keep the Beavers' sophomore speedster in sight. 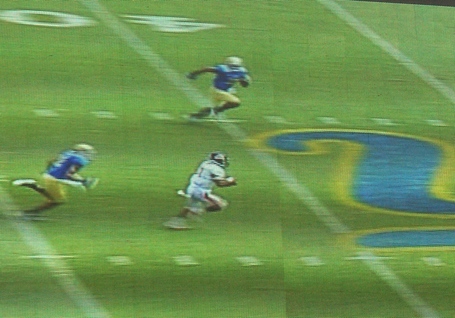 get a focus on the speedy Brandin Cooks.

The late hit penalty on Reuben Robinson was absolute bunk, but the defense shook it off, and forced a punt anyway.

There's plenty of improvements in schemes with new defensive backs coach Rod Perry's nickel and dime packages, which deserve a lot of credit for the overall improvements of the defense, but the biggest single difference is mental. Just as was the case against Wisconsin, all day long, the Oregon St. defense responded to adversity, be it self inflicted by the team (we'll discuss Mannion's turnovers on back to back plays in the third quarter shortly), a great play by the opponents, or a brutally bad call. It simply doesn't matter to this group; they shake it off and proceed to save the day.

So while Oregon St. still couldn't run the ball a lick in the first half of the game, the Beaver defense held Franklin to only 12 yards on his first 10 carries.

And Mannion was approaching 300 yards through the air when he found Wheaton for the 42 yard touchdown and a 17-3 lead with just under 5 minutes left before halftime.

"Sometimes you just need to hit some big plays," Riley said. "It's really hard to just chip away all the way down the field. Those big plays made a big difference."

It looked like that lead would hold up until the break when Keith Kostol uncorked a 61 yard punt, but the Beaver secondary lost Evans again down the right sideline, and 61 yards later, it was 17-10 at halftime when it should have been at least 24-3.

After an exchange of 3 and punts to start the second half, Mannion turned the ball over on consecutive Oregon St. offensive plays, fumbling after getting sandwiched by Bruin pass rushers, and throwing an interception, his only really bad ball of the game, as soon as the Beaver defense had gotten the ball back, after forcing the Bruins to turn the ball over on downs.

The Beaver defense got lucky, when the Bruins' Kenny Walker dropped a free touchdown, as the secondary completely turned him loose, a problem Perry must figure out. But they only made that one mistake, and another stop and the ensuing Oregon St. drive provided collectively to be the turning point of the game. UCLA's inability to capitalize on the only 2 turnovers of the game, and the Beavers' subsequent 88 yard, 11 play drive that took almost 5 minutes pushed the lead to 24-10, a 2 score margin instead of being behind, as could well have happened.

The drive was a product of Oregon St. finally getting the ground game going, for the first time this season. Wheaton's 10 yard fly sweep and a 23 yard run by Storm Woods got the drive going, and Woods' and Terron Ward's ability to finish a drive inside the 10 yard line with running plays, capped by Wood's 2 yard run, provided what would eventually prove to be the winning points. A debatable pass interference penalty on the Bruins contributed too, but plenty of those Pac-12 calls have gone against Oregon St. in recent years.

Hundley answered with the Bruins' best drive of the game, driving UCLA 75 yards in 7 plays in only 2:20, as the 90+ degree heat began to wear down the Beavers. Hundley capped the drive with a 1 yard touchdown, assisted by a push by Franklin, but Hundley, normally a rushing threat as well as a top flight passer, was held to 32 yards on 10 carries.

Oregon St. responded with clutch consecutive 11 yard runs by Woods, as the Bruins' big bodies in the trenches were also feeling the heat. The drive also featured the play of the game, as Cooks took a screen pass and spun out of a tackle for a 46 yard gain, but could only get down to the UCLA 1 yard line.

The rushing game disappeared as quickly as it had appeared, though, and Oregon St. couldn't close the deal, and had to settle for another Romanie field goal, putting the Beavers ahead only 10 points, 27-17 with still over 9 1/2 minutes left.

The Beaver defense dutifully dug in again, and forced the Bruins to settle for the field goal portion of the 2 scores they needed. But Fairbarin missed wide right, and Oregon St. made them start over on their own 12 yard line, when punter Keith Kostol pinned UCLA inside their own 20 for the third time in the game.

It took UCLA a dozen plays, and a ludicrous holding call on Jordan Poyer, to get in position for another Fairbarin field goal, and when the Beavers recovered the on-side kick, improving on handling it after the similar ending to the Wisconsin game, it would have been over, but for the 9th penalty of the game on Oregon St., an inexplicable false start by Connor Hamlett. But Kostol remedied the situation with his 4th punt inside the 20, this one pinning the Bruins at their own 10 yard line.

The defense needed only 1 more play stop, and the celebration at the viewing party the BeaverDam student group hosted at Reser Stadium began.

Mannion finished with 24 completions on 35 attempts, good for a career high 379 yards, and 2 touchdowns, topping Hundley's 27 of 42 afternoon, which produced 372 yards, and just 1 score.

Woods finished with 96 yards on 21 carries, and the Beavers ran for 122 yards despite several sacks allowed, while the Bruins only picked up 72 yards on the ground. Oregon St. was able to run the ball 41 times, giving them more rushing plays than passes for the first time in the Mannion era.

A crowd of 54,636 barely had the Rose Bowl more than half full, which had to be a huge disappointment to UCLA.

The viewing party at Reser had to have had a tenth of that turnout, and that was without an actual game to attend! 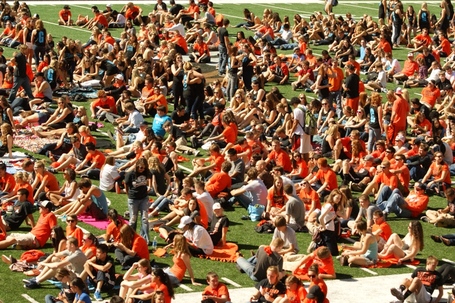 The turnout for the first try at such an event, especially given the complete with full-fledged first down chops and plenty of "OOOOO" "SSSSS" "UUUUU"s, had to be considered a success, and will probably prompt another such event in the future. 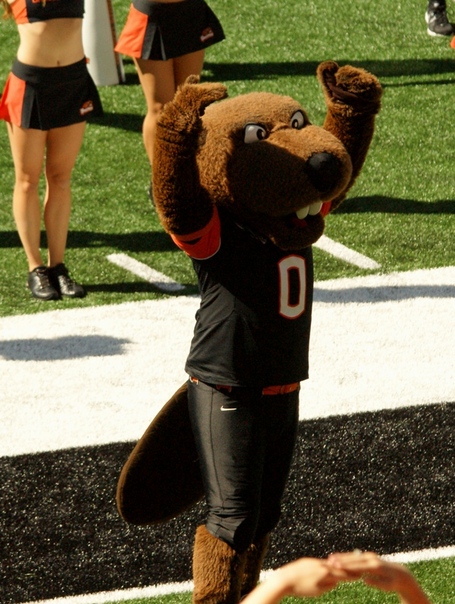 Benny instructs the new freshmen in the Beaver Dam on how to do the O in the O-S-U chant.

Oregon St. (2-0, 1-0) will doubtless climb into the top 25, possibly even the top 20, with their second win over a top 20 opponent this season, before they travel to Tucson next week to face Arizona. The 'Cats, ranked #22, visit #3 Oregon tonight.

The win that prompted Riley's stop for burgers moved him into a tie with Lon Stiner for most wins in program history, with 74. 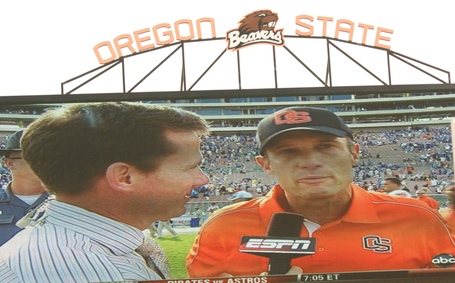 for most wins in the history of the program.

It was also the first ever conference road win for Riley before October, and only the Beavers second ever road win under Riley in September. The win broke an 8 game losing streak in true road games, dating to 2010 at Arizona. The win also ended a 2 game losing streak against UCLA.

Wheaton's 9 catches gave him 153 in his career, and moved him past Jacquizz Rodgers, into a tie for fifth with Phil Ross.