Kevin McShane A Pro (A European One, But Still A Pro)

Share All sharing options for: Kevin McShane A Pro (A European One, But Still A Pro)

Oregon St.'s Kevin McShane is a professional basketball player. It's in Europe, but still, Kevin is living the dream, and getting paid to do so. (And Jake helped make it happen.)

McShane flew out today for Denmark, where he will play for BC Aarhus, which plays in the top European division.

"I definitely believe that all of the hard work I have put in is the reason where I'm at today," McShane, the walk-on who became the Captain of the Beavers, said. "But there's no way I could do this without people who have supported me, whether that's family or friends or people on the staff who have always said `you can do it; just keep working.' It's almost like a movie. You go to high school, don't have a place to go, you walk-on at your dream university, become a captain and get a scholarship. Now I'm going to play pro."

Head coach Craig Robinson was as happy as he would have been to see one of his players reach the NBA, but like everyone who has known Kevin, wasn't surprised.

"As I've said many times, Kevin is the type of guy that when he puts his mind to accomplishing something, he accomplishes it," Robinson said. "So I'm not surprised at all. I couldn't be more excited about the fact that he is going overseas to play professionally. I think it's going to be a great opportunity for him. I think he is going to absolutely love it. And I'm looking forward to hearing his stories on his blog."

McShane explained how it came to be, and it turns out Jake Bertalotto, who was the original manager of Buildingthedam.com, had a hand in it.

"When I decided I wanted to play overseas, I worked with one of our managers, Jake Bertalotto, and got all of the game film from my time at Oregon State," McShane said. "He helped me figure out how to take certain clips off of it. Then I put together my own highlight tape using a program on a computer. I put it on my website, kevinmcshane.net, and anytime anybody asked about me, I sent them there. Or, if I wanted to get in touch with somebody, I sent them there. So I probably sent out 20 to 30 emails to different coaches, agencies, agents, just people I thought could help. And then, last but not least, my cousin Sean McShane had a contact overseas, put me in touch with them and now I'm going to Denmark." 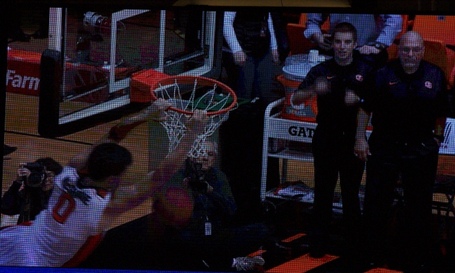 Jake Bertalotto, who can be seen celebrating on the sideline, that he helped McShane become a pro.

McShane will begin play right away, in a season that runs into March, and April if postseason success is great enough. He'll be back for a visit at Christmas, and will keep in touch electronically in the mean time.

"I will definitely miss my family, my friends and supporting Oregon State women's basketball, especially No. 22 Sage Indendi," McShane laughed. "But with all the things today like Skype, Facebook, Twitter and email, I can keep in touch with everybody."

The only other real disappointment is that McShane can't wear his familiar "0", as that's not a number allowed by league rules. But "12" will do.

"All of the teams I talked to said No. 0 wasn't available because in their league zeros aren't allowed on the jerseys," he said. "My number will be 12, not because my brother Angus (Brandt) wears 12, but because I called one of my grandparents, my grandma who I call `mom', and I said `mom, what number should I wear; I can pick between 3 and 15.' She picked 12 and I said '12 it is.' "