OSU Practice Day 3, And The Pads Go On

Share All sharing options for: OSU Practice Day 3, And The Pads Go On

At least the shoulder pads did, in day 3 of Oregon St.'s preparations for the 2012 football season. And the offense met the defense for the first time, at least for a while.

And on the very first play, OT Collin Kelley went down, with a tweaked left knee. Head coach Mike Riley did not think it was a good sign. Plenty of onlookers tended to agree.

Fortunately, it may not have been too serious, and Riley alluded to that in his post-game interview. After a couple of moments, Kelly walked off, and had it iced. He said afterwards that he could have come back, but there was no chance of Riley taking a chance at this point. Whether the knee feels better in the morning, or swells up and stiffens up overnight will tell more. 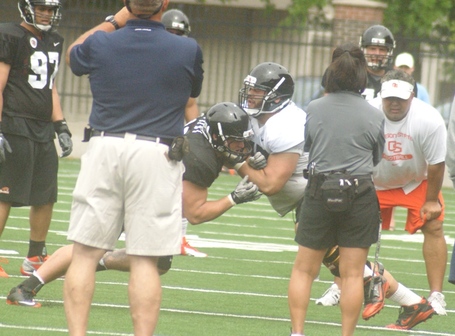 The offensive skill players and the defensive big hitters will get much more press over the course of the season, but there were plenty of eyes on DT Castro Masaniai and OT Michael Phillipp when they squared of. Does anyone really believe these two won't have as much to do with how Oregon St. does this season as anyone else on the squad?

Some quick observations and reactions of watching both 11 on 11 and 7 on 7 drills start with the feeling that regardless of whether Oregon St.'s season goes well or poorly, Brandin Cooks, below taking a pass from Sean Mannion, is going to have a big year. 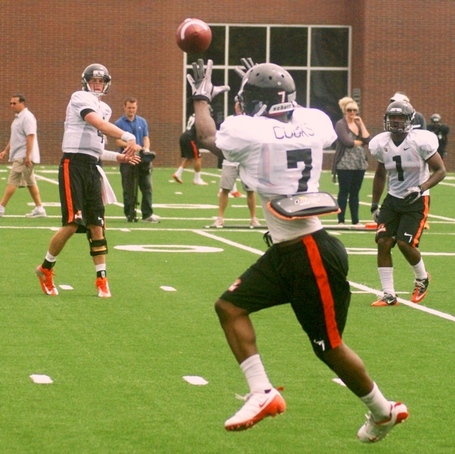 Cooks will give opponents something to worry about opposite Marcus Wheaton, and as a result, balance to the Oregon St. passing game.

Watching both work against the corners, its apparent CB Rashaad Reynolds is going to have a busy season. Opponents are likely to avoid CB Jordan Poyer, who had a couple of picks, one of which would have gone for a TD had he bothered to do so.

Beaver fans recalling the 18 picks Mannion suffered last season need not panic though; Poyer's highlight reel plays were more a product of the OSU offense making the mistake of throwing the ball in his direction. Mannion actually looks to be more accurate this year, with fewer far off-target tosses. He also only suffered one major would have been a sack that I saw. The defense was only really unleashed a few times though, with the focus seemingly on mid-level control, keeping both running and passing plays from exploding.

The good news about Reynolds is he appears to have invested a lot of work on building upper body strength, and did a good job against both Wheaton and Cooks in close, single coverage. The bad news is he's still only 5'10". One of the biggest plays of the day was a reception by 6'5" slot receiver Obum Gwacham, who, despite having Reynolds all over him, hauled in a deep seam route by pulling it in before the ball ever got down as far as where Reynolds could get a hand on it. 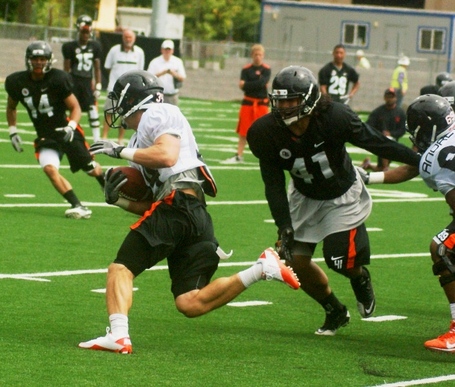 One of the things I was watching for was to see how well MLB Feti Unga (41, above) was able to move, coming back from last season's injuries, and he did a good job of getting to wide plays. In the process of watching the play above, as well as a couple of others, I was also happy to see how well Jordan Jenkins worked as a receiver out of the back-field. 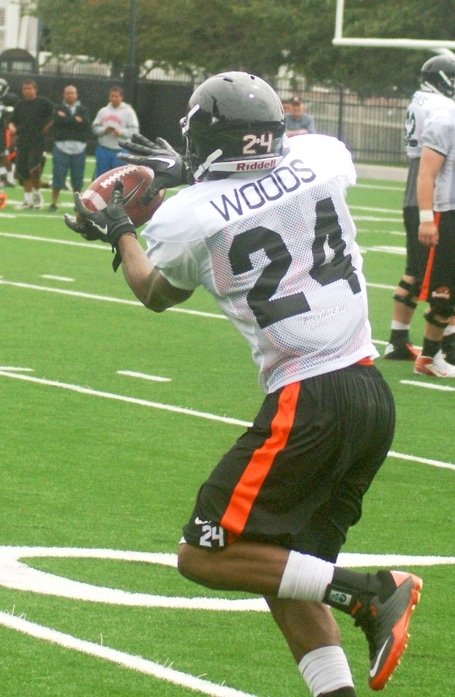 And it wasn't just swing passes that Oregon St. used to get the offense spread out. Both Storm Woods, above taking a swing pass, and Terron Ward, below, sweeping wide against Michael Doctor, with Unga in hot pursuit, look ready to contribute. 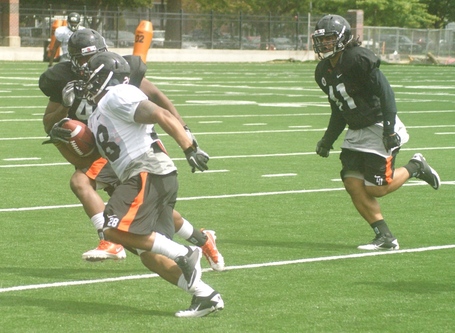 Malcolm Agnew's hamstring injuries were a major contributing factor to last season's struggles, and so far, he shows no signs of any lingering affects. Agnew, below, got to the second and third level with some regularity, though he was caught in the open by Poyer on a check-down route, as Poyer came from coverage on the offense's right sideline to haul in Agnew on the left hash. But again, that's not about Agnew, its about that Poyer guy. 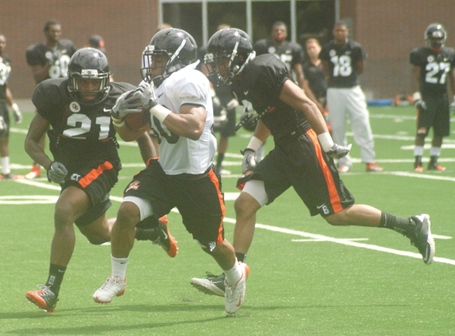 It's easy to see why Riley moved Jovan Stevenson to CB, with something of a log-jam of other running backs, especially given the addition of Chris Brown. 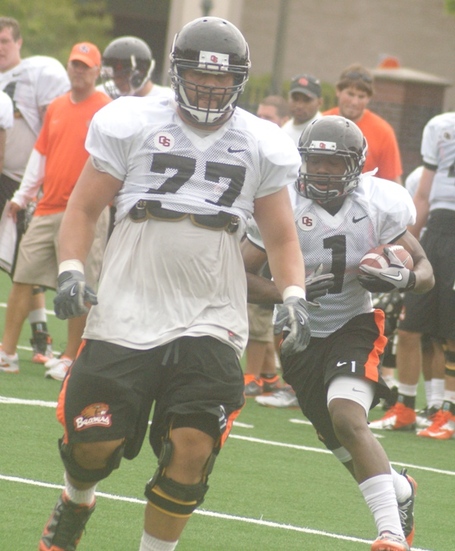 Brown is looking like he will be in the mix, and not wearing a red shirt this season, and, as seen above, has quickly learned that the best place for a little RB to be is right behind a big lineman like Phillipp.

So the earliest possible assessment contains no surprises; Oregon St. has the pieces to make some considerable improvements, but depth on the lines is an issue, and even minor issues there could render everything else irrelevant very quickly.

Practice continues tomorrow, and every day Monday thru Saturday, at 11 AM. Riley talks about liking the morning practices in the video.