Oregon St. started summer practices in preparation for the 2012 football season today, and while its unknown if the Beavers will improve on last year's disastrous 3-9 season, it won't be for a lack of direct involvement from head coach Mike Riley.

It was evident at practice immediately, as Riley was the one calling the plays, doing the pre-snap coaching (alignment adjustments, explaining the objectives and key points about each formation), and then making the post-play corrections.

The offense and the defense didn't work directly against each other in the first of the NCAA mandated no-pads acclimation sessions, with the first day focus in putting in plays and formations.

"I've never done it exactly like this," Riley said. "We've always had some interaction of the offense and defense, but I thought that's what these acclimatization days are for. I like the fact that they stayed focused and we got a lot put in today."

There was also a noticeable difference in approach, as, while there was a sense of urgency as the team worked through the several sessions that practice is divided into, the emphasis on practicing fast, aka what Oregon has done in recent years, that Oregon St. employed to a degree last year was replaced with more attention to detail.

Riley especially spent time on fine adjustments, and explaining things, an acknowledgement that running a lot of plays wrong may have done more harm than good.

That Riley was even on hand is evidence of the the gravity of the situation entering the season, as his father, Bud Riley, who was an assistant coach for a number of years at Oregon St. under Dee Andros, before heading to the Canadian Football League, which included stints as the head coach for Toronto, Winnipeg, Hamilton, and Calgary, as well as returning for the last year of the Craig Fertig era, passed away Saturday at his home in British Columbia, Canada.

The elder Riley, who was 86, has been battling illnesses for some time, and Mike Riley had missed some of the spring practices to be with his father.

"I'm thankful for him," Riley told reporters. "Because of my dad, that's why I'm coaching. I followed my dad around locker rooms since I could remember. He coached high school and I was in the bus and locker room."

You can read more by Riley about his father in an article the Oregonian's Paul Buker put together.

Buildingthedam.com joins with the rest of Beaver Nation and the Oregon St. community in extending condolences to the Riley family.

Observations on what went in

The offense worked on a lot of quick release passes, and also some roll-out passes, both of which seem aimed at cutting down on sack opportunities, a move made in response to the 27 sacks quarterback Sean Mannion suffered last season.

Mannion's accuracy seemed improved, though it will be more revealing once pads go on, and there's a defense to contest the play. 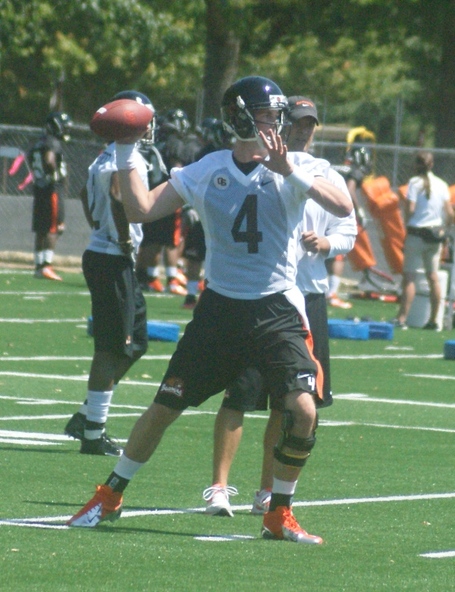 Freshman center Isaac Seumalo, #56, below as expected was working with the first string offensive line, and looked well prepared. 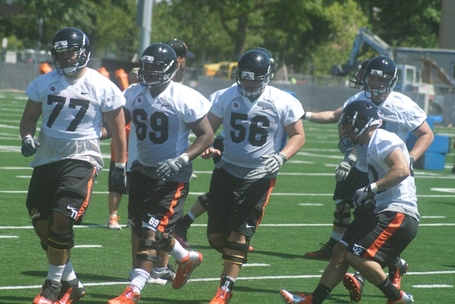 The day's practice was the first on the new field turf that was installed on the practice fields this spring, and though the temperatures were in the upper 70's at the beginning, and climbing into the 80s as the afternoon arrived, it was a fortunate turn of events that Saturdays' 100 degree plus heat, and Sunday's temperatures in the 90s, passed before camp started.

Riley made one roster move of note, shifting running back Jovan Stevenson to corner back, though Stevenson is still also listed as a RB as well as a CB, and will be a part of both units. But with 5 other running backs in camp, its apparent that Riley is trying to figure out how to still get some productivity from Stevenson.

The roster was also bolstered by the arrival of 6 of this year's walk-ons, with another scheduled to arrive in Corvallis tonight.

The additions bring the roster to 105, the number Riley wants to go through the season with.

Practice continues daily 6 days a week, starting at 11 AM. The first of 6 evening sessions is scheduled for Saturday at 6:30 PM.