Angry Beaver On The New Field

Share All sharing options for: Angry Beaver On The New Field

There's been a lot of speculation about what would be at mid-field on the new field turf at Reser Stadium, with some sentiment for the "OS" logo, as is on the infield at the new track facility. But the paint is dry, and "Angry Beaver" is back where he belongs, adorning the middle of the field, at least for one more year. Before next season, a Nike-designed "rebranding" will be unveiled, with an unknown affect on what Beaver fans will see. This year is still about the Beaver logo though, and the end zones will say "OREGON STATE" on both ends, using the new font, instead of the familiar block letters.

After checking out Reser, stopping by practice at Prothro Field also revealed how rapidly progress is being made on the new basketball practice facility.

Practice itself was rather uneventful the day after the last scrimmage of the pre-season, with Jordan Poyer's return the most notable development. Practice was also quieter, with offensive line coach Mike Cavanaugh not on hand. Cavanaugh had a doctor's appointment, and will be back in full voice soon.

Terron Ward showed no signs of ill effects from having missed some practices yesterday in the scrimmage, or today, but Storm Woods sought out the trainers to ice an ankle part way through the day. Obum Gwacham was again a spectator, which allowed more of the high passes to be directed to the tight ends, and Connor Hamlett had one of his better outings this pre-season. Freshman Caleb Smith also had a good day. 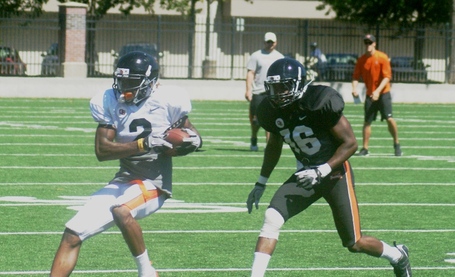 Its down to just 10 days until kickoff against Nicholls St., and its going to be interesting to see the 1s against another team, any other team. Markus Wheaton and Rashaad Reynolds, above, have reached the point where they are very familiar with each other.