Pac-12 Network Launches Today; Its Both A Success And A Failure For Larry Scott

Share All sharing options for: Pac-12 Network Launches Today; Its Both A Success And A Failure For Larry Scott 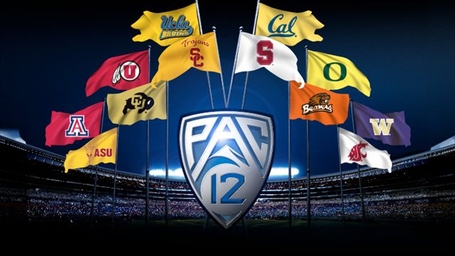 The much awaited launch of the Pac-12 Network is today, with programming hitting the cables at 6 PM PDT this evening. If you are a cable customer of Comcast, or in some areas out of state, Time Warner or Cox, or in an area served by a non-competitor of Comcast, like Bend Broadband or Frontier Communications, you will even be able to see it.

If you are in an area where these providers are not an option, or you live outside the Pac-12 footprint and are "served" by Cox, that's too bad; you are froze out.

You can see what you can see, or not, at the Pac-12 website.

The Pac-12 has produced an exclusive two-minute football preview show, which you can watch here.

Over the course of the year, Pac-12.com will offer thousands of hours of live streaming events, off-the-field reporting and pre- and post-game analysis.

The conference also has "Pac-12 Now", a new TV Everywhere experience, gives fans who subscribe to one of Pac-12's 24 television distributors access to more than 850 live events and other programs. Fans can begin watching at video.pac-12.com, through a new iPad app in the coming weeks or through mobile devices later this fall. Fans simply authenticate with the credentials provided by their television provider. Initially, however, only Time-Warner, Cox, and Brighthouse, and notably not Comcast, are supported for the videos that require those credentials (which include all the good ones).

Assuming, of course, fans have access to one of those cable television providers.

The launch represents both one of Pac-12 Commissioner Larry Scott's most important successes, and at the same time, by far his biggest failure to date.

The launch of an ambitious network where the conference pooled and retained most of their video assets with the distribution achieved via the mix of major and minor cable carriers is an accomplishment that is nothing short of spectacular.

But the failure to obtain ANY thru the air distribution via satellite distribution amounts to a substantial failure on Scott's part. So to is the inability to convince Cox to fully offer the Pac-12 outside the footprint.

Directv, Dish, AT&T, Hughes Net, among others have all not come to agreement with the Pac-12 despite repeated assurances that talks were continuing, and carriage agreements were "close", a statement that obviously was not true.

The price paid to secure the cable carriers, which was giving up the internet rights that would both allow customers an alternative, and allow the conference to service those not served by the cable companies, effectively dis-enfranchised many of the Pac-12's customers, both within its wide-spread western footprint, and across the rest of the country, and internationally (the Pac-12 has a very widely dispersed alumni base).

The audience outside the footprint is particularly important, because that's where the growth of the brand that is the Pac-12 can happen, or could if there was access. To drop the distribution ball in order to secure the cable carriage is a short-sighted error that is a surprising mistake on Scott's part, given his track record to date, and his previously articulated vision to extend the Pac-12 Network to a multitude of devices and locations. A vision that is diametrically opposed to the Comcast and Time-Warner business model.

The failure to secure any satellite carriage, which was a Comcast objective from day one, is a significant failure, and it will become a major failure if some compromise between the Pac-12's desire to extract additional massive amounts of revenue from the satellite companies, and the satellite carriers desire to get a major audience draw without paying hardly anything for it, isn't forthcoming in the next 2 weeks, before actual games begin. And audiences who would have tuned in, either at home, or on the road (all those rvs in the tail-gate sections that take up literally acres at many Pac-12 venues that have a tv playing college football content are satellite customers, and the ones that are the target audience for the network), will be watching other conferences and networks before and after the game.

But its already a big deal, as the "splash" of the launch has already been lost. Any advertiser who has decided to run content on the Pac-12 Network should be furious with Scott, and demanding a slash in fees for the faux pas that dramatically reduced the reach of their ads.

You can still go to the Pac-12's channel finder to see if your carrier has the Network, and send a message (which clearly didn't do any good) to those that don't. A better alternative might be to call your non-participating carrier and ask why they don't want your business.

So if you can see the premier, count yourself lucky, and maybe even share with the rest of us what we missed in the comments.