Getting An Update On BYU

Share All sharing options for: Getting An Update On BYU

Having played BYU twice in the last 3 seasons, the Blue and White Cougars (not to be confused with those Crimson and Gray ones up north) are fairly familiar to Oregon St. fans. But being that they are a non-conference opponent, Beaver Nation mostly doesn't follow them as closely as their Pac-12 opponents. And given the independent bunch that they are down in Provo, with no conference foes anymore since striking out on their own from the Mt. West, everyone is from at least a slightly different world than they are.

To bridge that gap, we got together with Brett Hein, the editor of VanquishTheFoe.com, which covers everything BYU, to exchange pre-season size-ups.

You can see what James ("figgi") spelled out for them about the Beavers here.

The fact that the Cougars have clawed the Beavers pretty good in those last 2 meetings, a 44-20 BYU beat-down in the 2009 Las Vegas Bowl, and last year's 38-28 Cougar win in Corvallis, could be contributing to efforts to forget about BYU. However, the teams meet again this year in Provo, on Oct. 13, in a game that could have a lot to do with the winning team fulfilling their season's goals, and the losing one seeing said goals getting away. Much like last year.

Here's what Brett had to say as BYU prepares for their second season as independents:

2011 was definitely a year of transition for BYU football. The newness of independence brought along with it different road trips, but that's not all that was new. The Cougars were breaking in a new offensive coordinator, as well as a "new" starting quarterback after mid-season disruption at the position. Add to that a suffering run game, and there were a lot of questions. Thanks to some heart and a strong defense, when the dust settled, the Cougars had still posted another 10-win season.

Building The Dam's editor, Andy, has asked me to address what might be the same, different, better, or worse about BYU this year than what the Beavers saw in 2011. Simply put, this year has much fewer questions, which is probably something an opponent like Oregon State doesn't want to hear.

Riley Nelson, the senior, is finally an undisputed starting quarterback. For the first time in his career, he enters a season having taken all the first-team practice reps in the offseason. Reps came at running back, too, where Michael Alisa -- the running back-turned-linebacker-turned-running back -- got his first offseason of #1 reps at his position too. He'll be joined by Iona Pritchard, an agile fullback who missed all of last season after a broken leg in the Spring game. On paper, the quarterback efficiency and running game should be better, a running game that already posted 282 rushing yards last year in Corvallis.

On the outsides, BYU returns every meaningful contributor at receiver and tight end from last season. 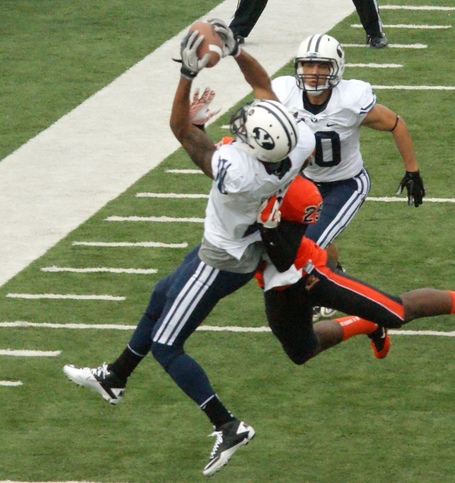 Cody Hoffman (6-4), above catching a touchdown pass against Oregon St., and Ross Apo (6-3) still bookend the outside, with slot receiver J.D. Falslev and tight ends Marcus Matthews, Austin Holt, and Richard Wilson all returning. The key question for the offense may come down to the offensive line. The unit does return three starters, but a slew of "minor" surgeries in the spring and some bumps and bruises in the fall has meant the unit has had little time to come together. A big storyline with the offensive line, however, has been a major change in training and nutrition, making the unit a bit slimmer than BYU opponents are used to seeing. Time will tell if this all translates to effective run blocking and pass protection.

Schematically, Brandon Doman has installed elements of an up-tempo offense after spending some time with Oregon coaches this offseason. Whether BYU is going full time to such an offense is unknown, but also unlikely. I would expect the same ball control offense, but with a refined hurry-up game to use to spring a surprise on the defense. There has also been some variety sprinkled in, in the form of fly sweeps to the slot receiver.

Defensively, the front seven that helped produced the 19th-best run defense in the nation looks to be in great shape again. Four Polynesian seniors anchor the three-man defensive line: Eathyn Manumaleuna, Romney Fuga, Ian Dulan, and Russell Tialavea. In BYU's 3-4 defense, three of last year's starters at linebacker also return in Uona Kaveinga, Brandon Ogletree, and the playmaker Kyle Van Noy. Especially since there is good depth on the front seven, the run defense is expected to be stout yet again.

The biggest question is the secondary -- the one on which the Beavers posted over 300 passing yards last year. Corner Preston Hadley and safety Daniel Sorensen return. The other two positions are said to be filled with much better athletes, leading some to call the secondary the most athletic it has looked at BYU since 1996 (when the Cougars went 14-1). Again, time will tell if this is the usual pre-season hype that springs out of most fall camps around the country. What is of concern, however, is depth. Jordan Johnson, a sophomore, is supposed to be the real deal at corner, but behind him and every secondary starter is a lot of question marks.

The kicking game may be nerve-racking, frustrating, and possibly comical, depending on the viewer. The punt team should be solid, but place kicking is scary at the moment. Coach Bronco Mendenhall expects kicker Justin Sorensen to be ready for the season, but it's hard to know if that will happen. As of now, he stands on the sidelines due to complications in recovering from off-season back surgery while the punter and backup quarterbacks take turns kicking. The prayers of BYU fans may mostly center around a game not coming down to a field goal.

Overall, expectations are decently high. The most prominent road block to the 10-win bench mark is tough pairings of challenging road games: a Utah-Boise State pair (which is also a Saturday-to-Thursday pair), and then consecutive trips to Notre Dame and Georgia Tech immediately after the visit by Oregon St. The pieces seem to be there this year at BYU. We just have to wait to see if the Cougars can make it come together for anything special.

It should be an interesting trip down to La Vell Edwards Stadium for the rematch!