The Intensity Increases In Day 5 At OSU Practice

Share All sharing options for: The Intensity Increases In Day 5 At OSU Practice

Friday was the first day in full pads for Oregon St. in pre-season practice for the upcoming football season, and with the extra gear came an extra measure of intensity. 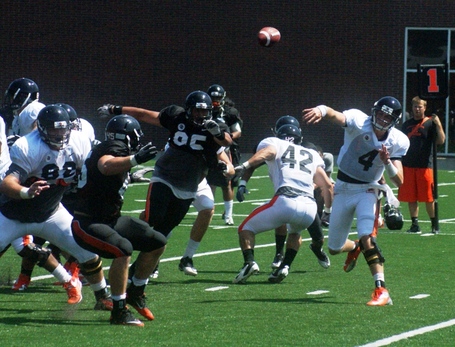 If the hitting wasn't enough of an indication that the Beavers were ramping things up, then the loud and brash comments of defensive coordinator Mark Banker, and especially offensive line coach Mike Cavanaugh, removed any doubt.

The first piece of good news came when offensive tackle Collin Kelly, who suffered a knee injury on the first play on Wednesday, and had to miss practice yesterday, returned to action.

However, safety Anthony Watkins watched practice, resting a sore hip. Watkins' absence isn't expected to be an extended one though.

The best watching at practice continues to be the battles between WR Brandin Cooks and CB Jordan Poyer. One of the highlights of the day was a deep out route quarterback Sean Mannion threw on a rope for a completion as Cooks' break resulted in a brief opening ahead of the fast closing Poyer.

Mannion also aired it out a couple of times, hitting Marcus Wheaton nearly in stride on a deep post route, and finding Kevin Cummings despite tight coverage on a go route up the right hash seam. 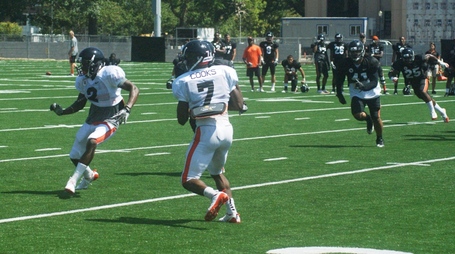 The emphasis remains primarily on short stuff, however, both in terms of quick outs, such as the completion above to Cooks, with Wheaton leading the interference, and a good quantity of work on the rushing game that Oregon St. struggled with so much last season.

Its always a good news/bad news situation in practice, and the fact that Cav was the one that was loudly blasting his charges, with language that was ear-burning even by Cav's standards, much more frequently than Banker was closely correlated to the defense keeping lots of the rushing plays contained to only short gains.

It continues to be anybody's guess which one or two of the 5 running backs working with the first team will emerge, but that's mostly because none of them have subtracted themselves from the picture. Head coach Mike Riley has said that he will have to settle on one or two to be the regulars, however. Last year's some times adopted approach of using several backs at what each one did best backfired, in that it became obvious to opposing defenses what was coming as soon as a given personnel package stepped off the sideline.

Another difference than in the last couple of years is an increased amount of time that the defensive 1s and 2s are working against the offensive scout team, and the offense 1s and 2s are working against the offensive 3s and 4s. This makes some sense, given that the defense won't see many offenses that look a lot like Oregon St.'s pro-style, and also a recognition that the Beavers' 4-3 look won't be encountered nearly as often as will 3-4 looks being adopted widely across the conference. It doesn't make sense to work primarily against looks you won't see.

Its still early, but given that there is a new punter in Tim McMullen to break in, as well as a new long snapper in Michael Morovick, and place-kicking with Trevor Romaine was also a bit of a mixed bag last season, its surprising how little special teams work has been happening this week.

Saturday will see the first double, as there will be a 6:30 PM shoulder pads only session following the normal daily 11 AM practice, which will again feature full pads.