Oregon St.'s Prothro football practice facility now has its new turf, and lights too! And even goal posts on one end. 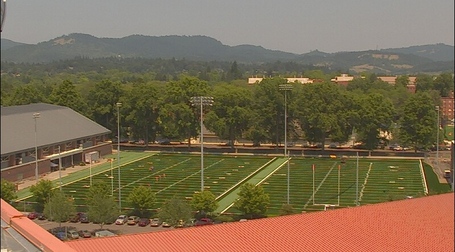 The field is still getting its finishing touches, but will be ready to go shortly. The addition of turf and lights will afford more options not only to the football team, but other activities as well, especially the Marching Band (you thought those programs came off without practice?), who have need for field access, and have been largely limited to the Truax indoor facility (left side of photo), and Reser, as the old, grass fields had to be preserved as long as possible, and also became soft and largely unusable as fall progressed.

Use of the Prothro fields was also limited to day-light hours, and now nightfall isn't a limiting factor.

Work is being wrapped up, with numbering and other finishing touches being applied. Work on installing the new turf inside Reser starts next.