Defense Ahead Of Offense At Oregon St. Spring Scrimmage

Share All sharing options for: Defense Ahead Of Offense At Oregon St. Spring Scrimmage

Oregon St. concluded spring football with "Fan Fest" and a scrimmage Saturday afternoon, and the defense had the upper hand, at least when the "1s" and the "1a's" went at each other.

Sophomore safety Ryan Murphy picked off Sean Mannion on the 5th play of the scrimmage, and senior corner Jordan Poyer made a couple of big hits, something not common in the nearly but not quite full intensity action that didn't get anybody hurt, and wasn't supposed to. But it did send the message that the secondary is serious about their business under new secondary coach Rod Perry, who has nearly 3 decades of NFL experience. The return of former Beaver Trent Bray as an assistant has had an impact as well.

Vaz had the best day throwing, completing 11 of 21 attempts, for 2 touchdowns, including a 44 yarder to Obum Gwacham, as well as the interception, though he got more reps than Mannion. 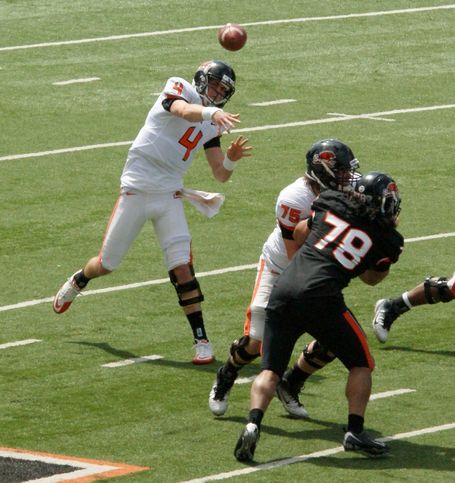 Mannion, above, was 8 of 15 for 81 yards, with no scores. The offense looked a lot like last year, with Mannion's arm strength on display, but unfortunately, also considerable inaccuracy. And Mannion is no more mobile, so don't expect the odd-looking play where he wound up leading the blocking on a reverse sweep to be repeated very often.

The quarter of healthy candidates for the running back position all got about an equal share of the 32 rushing plays run for them, but most of them came after the early portion of the scrimmage against the primary defenders featured mostly passes. Despite head coach Mike Riley's desires to be better balanced between the run and the pass than last year, it appears that offensive coordinator Danny Langsdorf will still lean primarily on Mannion's arm and the passing game. 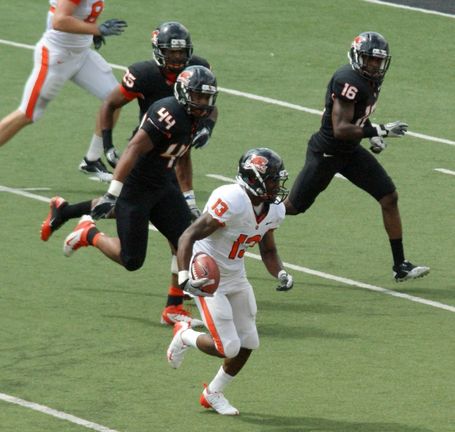 WR Brandin Cooks, above, looked good, though he gained only 16 yards on 3 catches, but had the only effective fly sweep of the scrimmage, for 17 yards. The low number of yards he and Marcus Wheaton, who had 3 catches for 32 yards, recorded reflect the tendency of the offense to shorten up routes a lot in reaction to pressure on the quarterbacks. 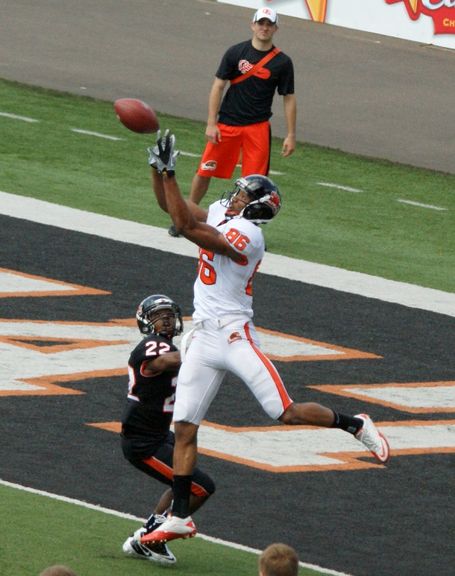 One of the interesting challenges Riley and Langsdorf will face will be to determine how to fit Gwacham, above, into the passing game. Wheaton and Cooks are clearly entrenched as every down threats, and if Jordan Bishop, who did not participate due to recent ankle surgery, but appeared to be on the verge of being ready to go, is healthy, there won't be a lot of reps available for Gwacham, given that the Beavers do not run a lot of 4 wide receiver sets.

The 6'5" Gwacham is a major matchup problem, though he does still need to learn to run out deep routes. Gwacham had 4 catches, for 96 yards and a touchdown, but was overthrown on a couple of occasions when big plays were available, an apparent product of his focus on precise route running. 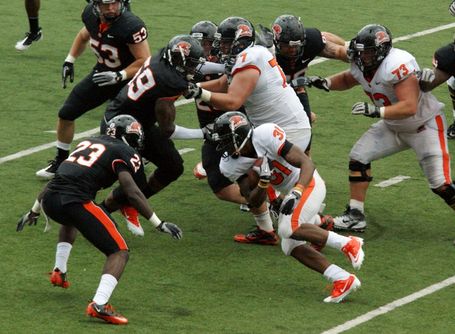 When the team did run, it appears Storm Woods, above, is the best of the bunch, possessing an ability to run over defenders in traffic while still showing considerable speed. Woods carried 8 times for 37 yards, and its easy to see why Riley has been high on Woods. 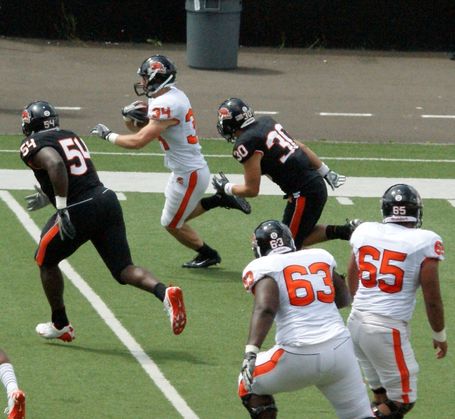 Jordan Jenkins, above, was the leading rusher, with 9 carries for 45 yards, and exhibited the vision to get all there was to get out of most plays. Terron Ward had 24 yards on 7 carries, and clearly looks more game ready, having grown into their size as so many players do after a year in the weight room. 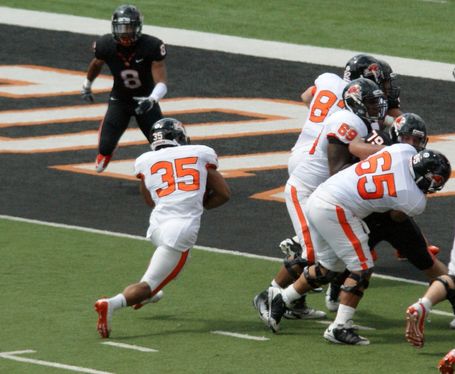 Malcolm Agnew, above, had 32 yards on 8 carries, and the only rushing touchdown of the day. Agnew ran with both the first string and the fourth string, so its still unclear where he will fit into the greater scheme of things. 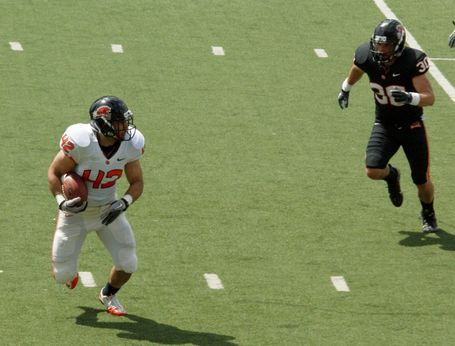 An interesting possibility to keep an eye on will be FB Clayton York, above, who was surprisingly effective on pass routes out of the backfield, with 4 catches for 41 yards. It's an aspect of the offense not seen much in some time.

Everything about the offense has to be taken under advisement, however, pending the arrival of the several additional linemen who are coming this summer, or were unavailable due to rehabbing injuries. However, the late start at trying to incorporate them into the system could also leave Oregon St. behind the curve early in the season.

Defensively, the edge speed of DEs Scott Crichton and Dylan Wynn should cause considerable havoc for opposing defenses, though size is a concern, especially with Wynn. Crichton meets the "eye test" and appears bigger than the 6'3", 263 he's listed at.

Two impressions came out of watching the linebackers. One, Oregon St.'s prospects will be much improved if Feti Unga can stay healthy. Two, Reuben Robinson, below tracking down Ward, is going to be used a lot in space and coverage. 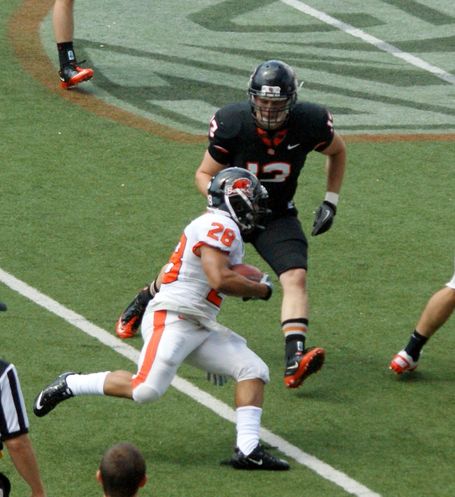 The starting secondary was active, and this with starting safety Anthony Watkins, last year's leading tackler for the Beavers, watching, after shoulder surgery for a torn labrum. Watkins indicated he's been cleared to lift again, and was days from being cleared for contact, or he would have been in action this spring. 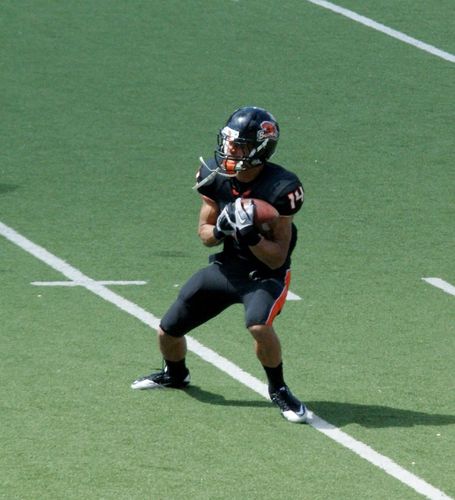 It will be interesting to see what kind of numbers Poyer, above, a senior team captain, will be able to post. The lone All-Conference player the Beavers have from last year, Poyer could see opponents avoid him, wisely, just as Langsdorf, Mannion, and even new punter Tim McMullen did. The game plan seems to be to figure out where Poyer is deployed, and then get the ball as far away from him as possible, hoping to get as much done as possible before Poyer runs half way across the stadium and gets in on the play anyway.

Beyond that, there were a lot of players getting a lot more reps on defense than they will likely get come fall. There is a lot of athleticism, but also a lot of work to do on ball instincts with the youngsters, at both the LB and DB spots.

Two who should see a lot of action, however, are sophomore safety Tyrequek Zimmerman and red shirt freshman Micah Audiss. Zimmerman has an athleticism that demands he be on the field in some capacity.

And keep an eye on Audiss, who was the surprise of the day. Oregon St. may have their next Poyer in Audiss, who, like Poyer, is an in-state product who has great ball instincts. Regardless of what kind of play was being run, or who was running it, Audiss always seemed to be around the ball. And he had a blocked field goal. Expect Audiss to find time on special teams, not unlike how Poyer started, as Riley will find he's hard to keep off the field.

Speaking of kicking, it appears Oregon St. does have a replacement for punter Johnny Hekker, complete with quirkyness, in McMullen. The colorful Aussie's punts were not only long, they were directional, trying to minimize the room Poyer, and Wheaton, below, the primary punt returners, had to work with. 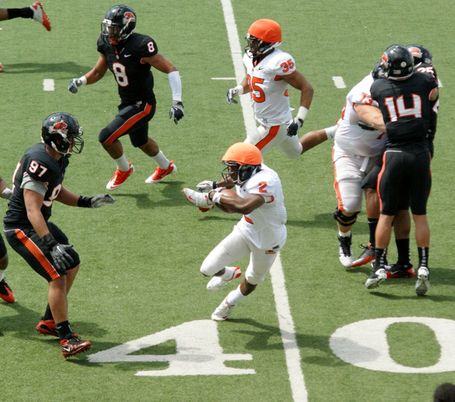 Placekicker Trevor Romaine made field goals from 40, 33, and 45 yards, but was wide right on a 42 yard attempt, and had a 50 yarder blocked by Audiss. Romaine's kickoffs seemed improved, with one going to the back line for a touchback, and the other easily 5 yards deep in the end zone.

The number of illegal blocking penalties on punt returns was concerning, something that could render an Oregon St. strength moot.

Fans got autographs before the scrimmage from all their favorite Beavers, including Scott Crichton, above, and even Benny, below, who took his place in the line as well.

And even the band was on hand, and ready for some football action. 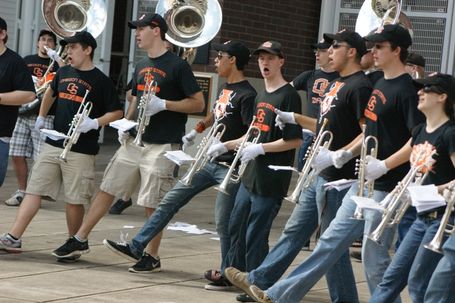