Share All sharing options for: Bruin Pitching Throws Game Away And Beavers Pull Out Win, Series

UCLA pitching literally threw the deciding game of the Bruins' series at Oregon St. away Sunday, as the Beavers held on for the 7-6 win.

Bruins starter Zach Weiss twice threw away bunted balls that twice led ultimately to the Beavers taking 2 run leads, in the 1st and 4th innings. Weiss bounced the throw past UCLA first baseman Pat Gallagher in the first inning, and sailed a fast ball that deflected off Gallagher's outstretched glove in the 4th inning. Both resulted in 2 base errors, leading to 2 unearned runs each time.

Weiss also failed to cover first on an Oregon St. grounder to short right field, and muffed another bunt for his 3rd charged error of the game, which prompted UCLA head coach John Savage to pull Weiss, who pitched well, but proved to be too much of a defensive liability to continue.

Weiss wasn't the only Bruin pitcher to make errant tosses that ultimately contributed to the Beavers' win. After taking over for Weiss after the bobbled bunt that loaded the bases in the 4th inning, UCLA reliever David Berg hit Oregon St. leadoff hitter Max Gordon with a pitch, scoring Ryan Barnes.

And in the 7th inning, when the Bruins ace closer Scott Griggs took over after the Beavers' had opened their third 2 run lead of the game, his first pitch was too much for UCLA catcher Trevor Brown to control, and when it went to the backstop, Ryan Dettman, who was pinch running for Ryan Gorton, dove into home for what ultimately proved to be the game winning run, putting Oregon St. up 7-4.

Not that the excitement ended their, though. 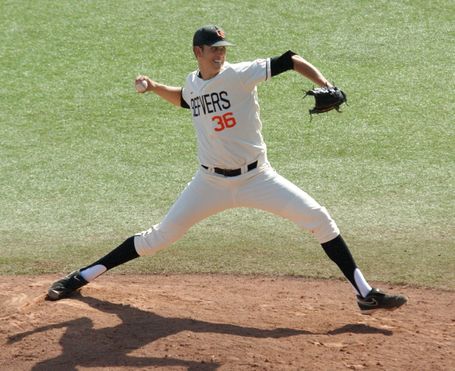 UCLA, having twice erased Oregon St. 2 run leads earlier, made another move of that size, getting 5 hits and 2 runs in their last at bat. But with 2 Bruins on base, the Beavers' closer Tony Bryant, above, finally got the last out, when UCLA cleanup hitter Jeff Gelaich, who was 3 for 4 at that point for the day, flew out to Oregon St.'s Michael Conforto in left to end the threat, and the game.

It might have been even closer had UCLA not suffered a base running miscommunication in the middle of their rally.

Cody Regis and Shane Zeile had started the inning with consecutive singles, and were on second and first. The Bruins' Chris Keck delivered a pinch hit single, and the UCLA third base coach signaled Regis to go home, with Zeile, already well beyond second.

Possibly concerned that he couldn't make it home, Regis stopped and returned to third, with Zeile already sliding head first into the base. Ryan Dunn tagged out Zeile, as only 1 runner at a time can be protected by being on a base.

Despite repeatedly being blamed by Oregon St. radio announcer Mike Parker for committing the base running error, this was NOT Zeile's fault, as Regis had been sent home.

Regis would subsequently score, on a sacrifice fly by the Bruins' Beau Amaral, who by sacrificing saw his 21 game hitting streak come to an end. Two more singles pulled UCLA within 1 run before Bryant finally put an end to the uprising.

UCLA wasn't the only team guilty of pitching mishaps, however, as Bryant, who took over for Matt Boyd after the Bruins had pulled within 1 run and loaded the bases with 2 outs in the bottom of the 7th, immediately took both Oregon St. starter Dan Child and Weiss out of the decision, and blew the save opportunity as well, when he uncorked his first wild pitch of the year on his first pitch in the game, allowing Regis to score to tie the game. 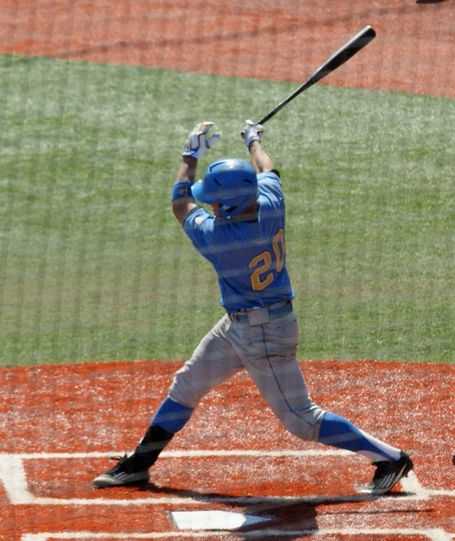 Bryant recovered to strike out Pat Valaika, and withstand Gelaich's double in the 8th inning, above, as well as weather the Bruins' 9th inning rally to to get the win, making him 4-1 for the season. It was Bryant's longest outing since in the Arizona St. series last season.

Home Plate umpire Andy Dowdy found a way to figure in the wild game in front of the sunbaked crowd of 2,459 fans, the largest of the year at Goss, on the warmest day of the year so far, as well.

After seeing UCLA rally from 2 runs down for the second time in the top of the 7th inning to tie the game at 4-4, Oregon St.'s Tyler Smith, the Pac-12's leading hitter, drew a full-count walk. Oregon St. coach Pat Casey ordered Conforto, who leads the Pac-12 in RBIs, and is second in the nation, as well as being the Beavers' leading home run hitter, to bunt. The second failed attempt to do so saw the ball appear to drop straight down onto the plate, where it would be a fair ball, with no apparent double hit or contact with Conforto or Brown, the Bruins' catcher.

Brown picked up the apparent fair ball and began to throw for an easy out, but Dowdy killed the play, calling a foul ball, possibly due to being screened. Relieved of the bunt order, Conforto proceeded to double off the fence in right center, putting he and Smith both into scoring position.

That got UCLA reliever David Berg replaced by Ryan Deeter, who hit Gorton with his first pitch. Dowdy ruled Gorton had turned into the pitch, however, and did not award Gorton first base. 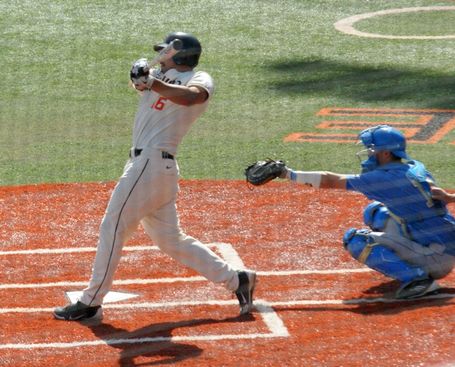 The Bruins might have been better served by not allowing the Beavers' cleanup hitter to hit, however, as Gorton ultimately singled up the middle, above, past the pulled in UCLA infield, scoring both Smith and Conforto, giving him 3 RBIs for the day, and setting the stage for the speedy Dettman to pinch run, which ultimately led to the winning run.

It also resulted in Berg getting the loss, lowering his season mark to 4-2. 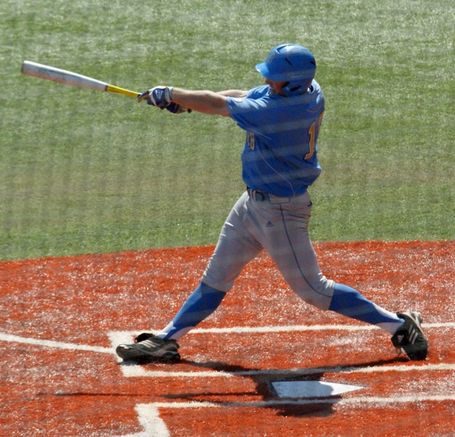 Child pitched well, if not dominating, and pitched into the 7th inning, despite losing Oregon St.'s first 2 run lead when Regis, above, homered to right center, with Gelaich aboard. Regis wound up 3 for 4 for the day, with 3 RBIs and 3 runs scored.

Matt Boyd took over for Child, who had allowed only 4 hits, in the 7th, but wasn't his usual self, getting only 1 out, with an RBI single by Regis and a double by Zeile wrapped around it. But the one out got Oregon St. just close enough for Bryant to just hold off UCLA, despite his allowing 6 hits, and though it was spooky to say the least, the formula of having starting pitching finding a way to deliver the game and a lead to the killer "Bs" of the Beaver bullpen worked once again.

As a result, Oregon St. took the series from UCLA 2-1 for the second year in a row. Indeed, were it not for Adam Plutko, the Beavers might have swept the Bruins both years, as it was Plutko that got the Sunday win last year, as well as the 4-0 win Friday night.

The 2 defeats the Beavers have handed the Bruins in the last 2 days are only the second and third losses UCLA has suffered on the road this season.

5 of the 7 Oregon St. runs were unearned, and it rendered moot the fact that UCLA out-hit them 12-5. 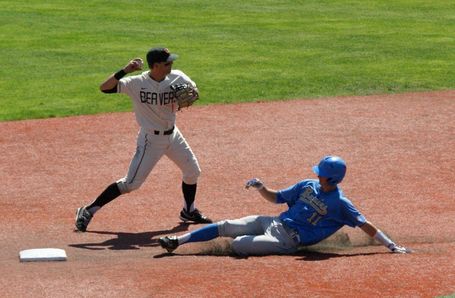 a double play above, that erases several UCLA threats.

The Beavers, who have now won 8 of their last 9, travel down to Eugene for a non-conference contest at PK Park against Oregon Tuesday, with the first pitch at 6 PM.