Share All sharing options for: Starks Shoots Some Buffalo

Oregon St.'s Ahmad Starks turned what was a competitive Pac-12 contest into a a buffalo shoot early in the second half, hitting 5 straight shots, 3 of them from 3 point range, plus a free throw that game him a traditional 3 point play to go with his long range shooting. His personal 14 point run turned what was a 41-36 game less than 5 minutes after halftime into a 19 point, 55-36 advantage for the Beavers in just over 2 1/2 minutes. All of Stark's game high 18 points came in the second half.

It started a 22-4 run to the midway mark of the second half that Colorado could never overcome.

"The coaches in the locker room before the second half just kept telling me to be ready," Starks said. "That is just what I tried to do by staying loose and warming up well at halftime; that was the most shots I have ever hit in a row."

The Buffs did respond with a 10-1 run, but the Beavers countered with an 11-4 burst of their own, capped by a Joe Burton layup that made it 80-58 Oregon St. with 2:20 to go, and there was nothing left to do except bring senior captain Kevin McShane out of the game to a standing ovation.

McShane got a rare start, and contributed quality minutes, especially defensively, early and all game long.

"It is not my style to start a senior, just because he is a senior," Oregon St. head coach Craig Robinson said. "I used to be a player, and I always felt that if you earned your starting position, then you had earned your starting position. I was wrestling with starting Kevin, until Angus Brandt walked up to me and volunteered his spot for Kevin. That speaks volumes about this team."

And the team executed well on both ends of the floor, out-shooting and out-rebounding Colorado, as well as out-defending the Buffs.

Oregon St. shot 54%, including 69% in the second half, and 44% on 3 pointers, and made 64% of their free throws. Colorado, in contrast, shot 48% from the field and the line. Most importantly, the Buffs were only 2 of 8 from 3 point range. Once the Beavers built a double digit margin, the Buffs were ill-equipped to mount much of a comeback because of their lack of perimeter shooting.

Oregon St. also had a +5 edge on the boards. 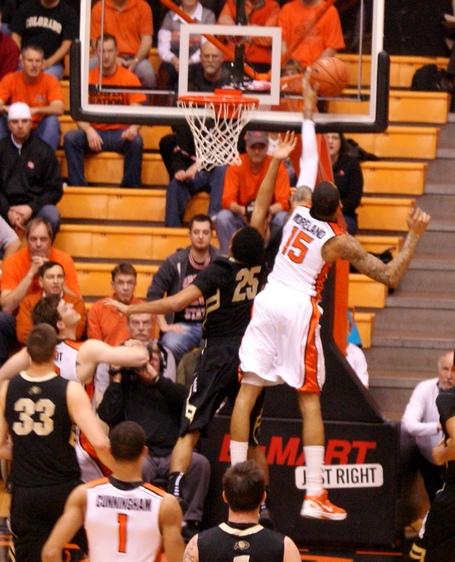 The 10 shots the Beavers blocked were symbolic of the overall defensive team effort, as though Eric Moreland led with 5, including the one above of a shot by the Buffs' Spencer Dinwiddie, Devon Collier, Joe Burton, Jared Cunningham, and Brandt all had swatted balls as well, and McShane had a strip before an impending shot could be released. 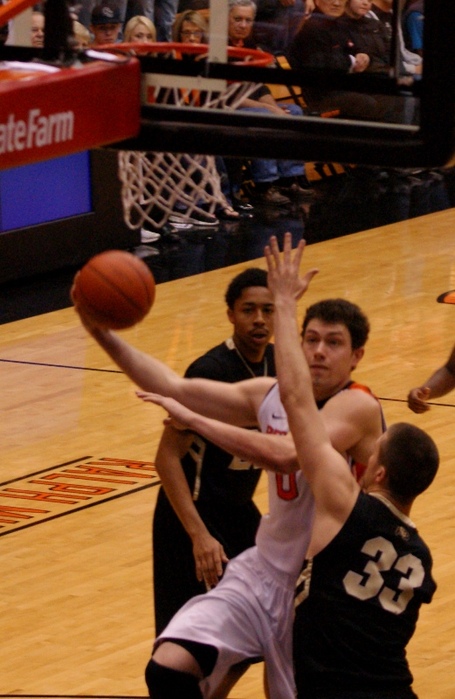 Kevin McShane came to play on his Senior Day.

"What you saw today was a team that played like Kevin McShane," Robinson said. "This was a Kevin McShane day from start to finish. The way we followed the game plan, playing defense and hustling to balls. I think everybody dove for a ball today. I hadn't seen that. And then wire-to-wire man-to-man. (The Beavers never used their 1-3-1 or the 2-3 zone defenses.) That had Kevin written all over it."

Cunningham and Roberto Nelson complimented Starks with 15 and 16 points respectively, and Starks had a game high 5 assists. Starks shot 64% from the field for the game. Collier, who was still showing some effects of the dislocated kneecap he suffered last Sunday against Oregon, added 11 points, and barely missed a double double, with a game high 9 rebounds. 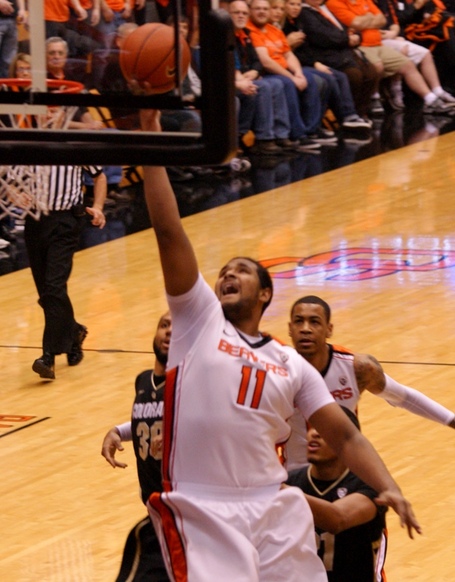 Burton, above, came off the bench with another solid all around game for Oregon St, with 10 points, 7 rebounds, and a block, a steal, and an assist.

Askia Booker, above, came off the Buffs' bench to lead Colorado, with 15 points, and Carlon Brown and Andre Roberson added 14 apiece, but Austin Dufault was limited to 7 points.

The Buffs only lead of the first half came on a dunk by Roberson for the game's first points, but McShane answered, and after ties at 2-2 and 4-4, the Beavers led the rest of the first half, though never by more than 8 points. Colorado closed the first half with a 7-2 run, capped by a 3 by Booker that made it 30-27 Oregon St. at the break.

Roberson opened the second half with a jumper, and Booker's other 3 pointer put Colorado ahead by 2, but Starks got started on his scoring, with a jumper to tie the game at 32 apiece, and like in the first half, the Buffs never led again. 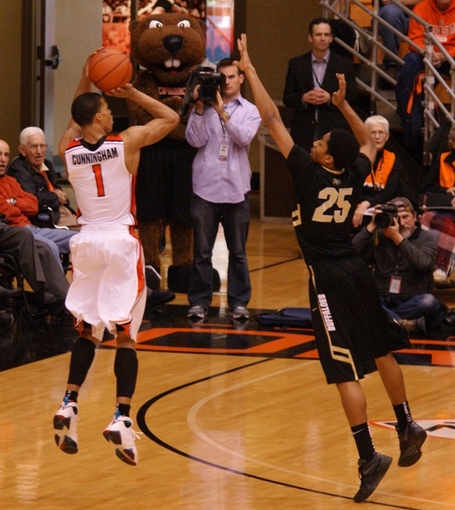 Cunningham connected on back to back baskets, one a 3 pointer, above, and then Brandt buried a 3 pointer to put the Beavers up 41-34.

Roberson's dunk cut the deficit to 5 points, but then came the Starks shooting exhibition that effectively ended the intrigue.

The only other winning season in the lifetime of any of the current players came in 2004-05, when the Beavers went 17-15 and lost in the first round of the NIT Tournament. A single win in the 2012 Pac-12 tournament or any post-season tournament Oregon St. may be selected to will equal the highest win total for the team in the last 22 years, posted by the 2008-09 team in Robinson's first year, when the Beavers finished 18-18, and won the CBI Tournament.

Disappointingly, only 4,326 turned out, leaving Gill less than half full. McShane deserved better, and so did one of the best Beaver teams in a generation.

Colorado (19-11, 11-7) dropped both their games this week in the Willamette Valley, and lost an opening day bye in the Pac-12 Tournament. The Buffs finished tied with UCLA for 5th place, but the Bruins have the tiebreaker as a result of their 77-60 win in the teams' only meeting of the season. Colorado will face Utah (6-24, 3-15) Wednesday. 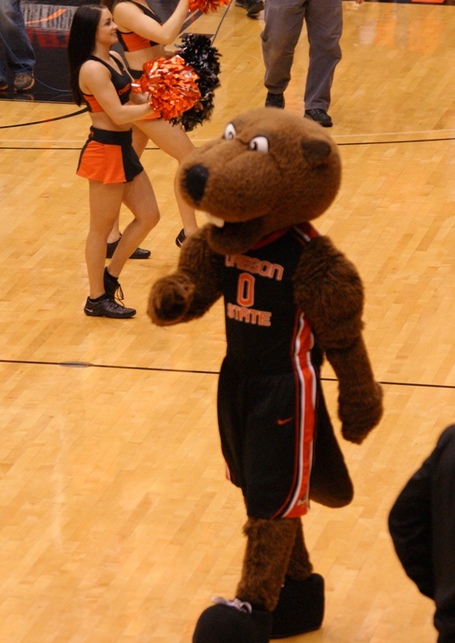 "Not in our house!" Benny declared, as Oregon St. completed a weekend sweep of the

newest members of the Pac-12.

Oregon St. (17-13, 7-11), with a sweep of the final weekend of the regular season, finished tied with Washington St. (15-15, 7-11) for 8th in the Pac-12, and will meet the Cougars Wednesday at noon in the conference tournament in the Staples Center in Los Angeles. Washington St. actually claimed 8th place, due to their season sweep of Oregon St., winning 81-76 in Spokane back on New Year's eve, and again 83-73 in the rematch at Gill, but all that will determine is the color of jerseys each team wears on Wednesday.

The winner will face California Thursday if the Golden Bears beat Stanford Sunday; otherwise it will be Washington. 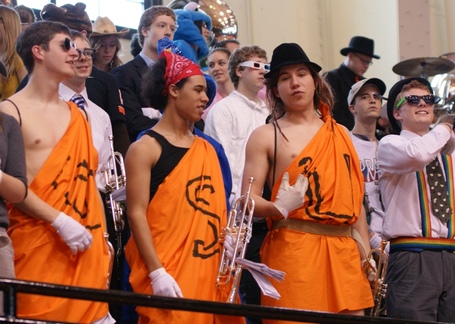 The Oregon St. Pep Band celebrated the last home game of the season with "alternate" uniforms. 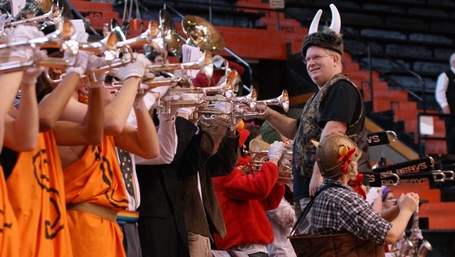 (Don't worry, Doc will have them back to their usual sharp looking ways at the Pac-12 Tournament.)