Share All sharing options for: Oregon St. Fast Start Leads To Wire To Wire Win Over St. Mary's In WNIT

Oregon St. used a fast start and a big night by senior Earlysia Marchbanks to take a wire to wire win over St. Mary's of the West Coast Conference in the second round of the WNIT Saturday night at Gill Coliseum.

The Beavers took leads of 5-0, 11-2, 18-6, and finally 23-9 before the Gaels finally got into double figures scoring only 5:22 before halftime. Oregon St. opened their largest lead of the first half, 25-10, on a jumper by Sage Indendi, but St. Mary's answered with an 8-0 run to get back within striking distance, before Marchbanks made it 27-18 at the break, with a pair of free throws with .4 seconds left.

"After they beat us so bad last time (a 20 point defeat), we knew we had to have a good first half," Marchbanks said.

The Beavers started the second half strong as well, with another 6-0 run, extended their lead to 16 points, going up 38-22 on another Indendi basket with 12:20 to go.

But the Oregon St. offense stagnated a bit in the second half, as the crisp ball movement that had created their fast start disappeared. Meanwhile, St. Mary's made an 8-0 run in 2 1/2 minutes, cutting the deficit in half.

The Beavers then took the wind out of the Gaels with a 6-0 run that turned the tide of the game, though.

Thais Pinto got an offensive rebound, and seconds later a basket. 2 steals later, another Pinto offensive rebound eventually led to a third chance basket on the possession by Marchbanks. And then a Molly Schweggler steal and layin with help from Indendi reopened the lead to 44-30.

St. Mary's never got the deficit down to single digits again, and had to resort to fouling for possessions with nearly 3 minutes to go. But Oregon St. made 10 of 13 free throws over a minute and a half, and St. Mary's suspended the fouling in the last minute of the game, after falling behind 18 points, 56-38.

Marchbanks finished with a game high 14 points, including 7 of 8 at the line, and an even more important game and career high 15 rebounds, most in heavy traffic. Alyssa Martin added 12 points. 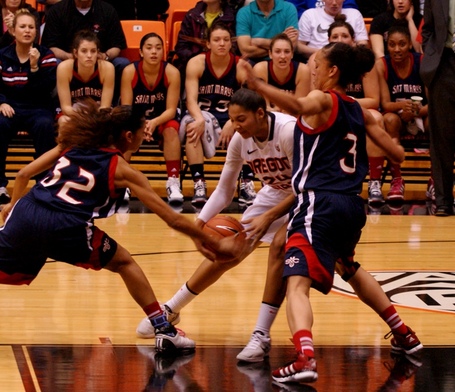 Jasmine Smith was the only player in double figures scoring for St. Mary's, with 12 points. However, she was only 2 of 10 on 3 pointers. Outside shooting had been a big key in the Gaels' 20 point 81-61 win over the Beavers back in December, also in GIll Coliseum.

That night, Jackie Nared, who is from Portland, and Westview High, scored 26 points, and Smith added 22. Tonight, Nared was held to just 8 points and 11 rebounds. The Gaels shot 64% on 3 pointers, making 14 of 22 back in December, when they scored as many points in the first half as they got all night in the rematch. Tonight, St. Mary's again took 22 3 pointers, but made only 5 of them.

That accounts for 27 points of the 35 point swing. The rest was easily due to Oregon St's interior defense. The Beavers blocked 10 shots, 6 by Patricia Bright. Significantly, 3 more, a career high, were by guard 5'11" guard Ali GIbson, including a pair in the late going, when Oregon St. was quelling St. Mary's last attempt at a rally.

"I loved the energy we played with tonight," Oregon St. head coach Scott Rueck said. "Tonight, I thought our assistant coaches, Coach Ely and Coach Campbell, gave us a great game plan defensively, in how we guarded their pick and roll play against our zone. That was an adjustment that I thought really changed the game, and kept them off balance from the beginning because that is strength of their team."

"I just loved the energy this team played with tonight," Rueck added. "It was a defensive effort that I am used to. We haven't played like that for a couple of weeks."

The game was very much on the physical side, and it was apparent the officials were not in the Pac-12 style of inconsistent whistle-happiness. Both teams were "allowed to play", and it suited Oregon St. well. 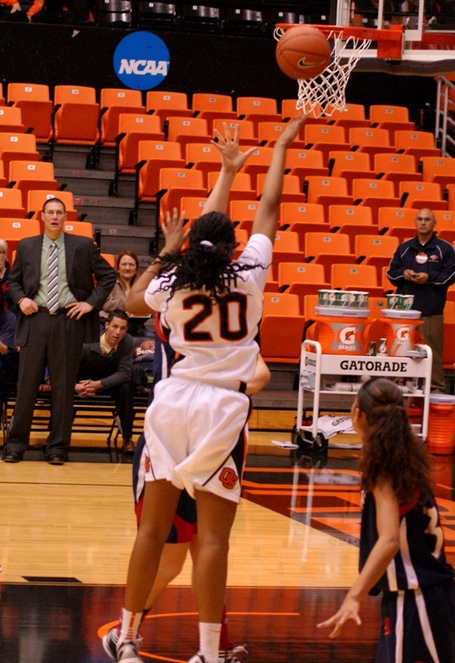 The improvement by both Bright, above, and Pinto, below, in 3 months completely changed the complexion of the game. Bright had 6 points and 6 rebounds to go with her 6 blocks, while Pinto had 6 points and 7 rebounds. Both seriously altered St. Mary's inside game. 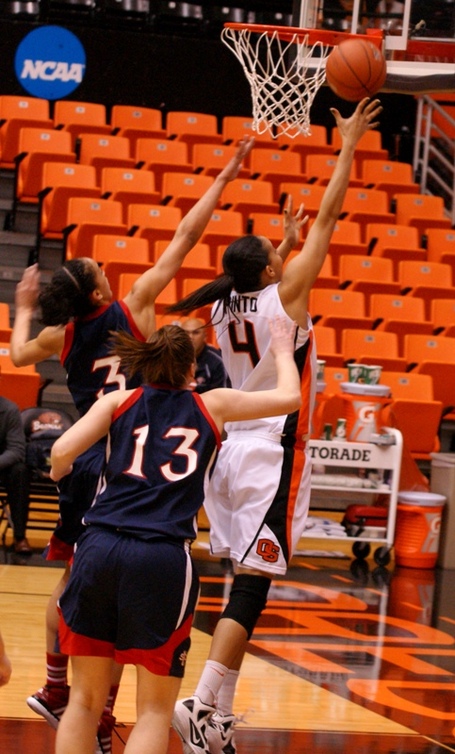 As a result, St. Mary's season is finished, and Oregon St. moves on to a WNIT third round game against a Pac-12 foe.

With the win, the Beavers have reached the 20 win level, just 2 years after Rueck took over a team that had only a couple of players still on the team, and he had to have on-campus tryouts to find enough players to even be able to put together a practice session.

Oregon St. (20-12) will meet the winner of tomorrow's Utah-Washington game in a WNIT Sweet 16 game, with the date, time, and site to be decided early in the week. Only 917 showed up, the second game in a row with attendance < 1,000, disappointing given the caliber of the teams. Raising admission prices for the NIT games was clearly a mistake. It could be a factor when the WNIT sets the site for future games, given they did not immediately award the higher seeded Oregon St. team another home game. 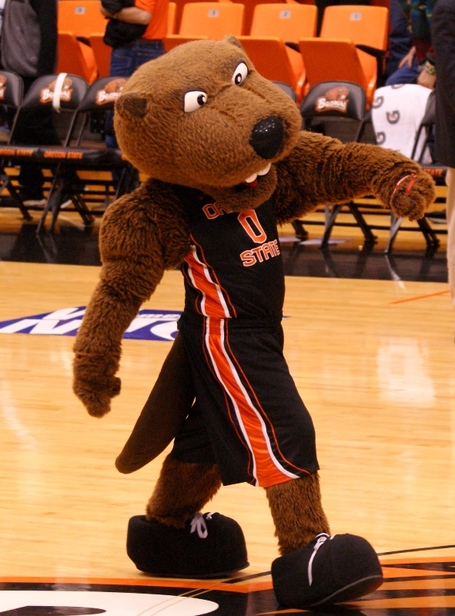