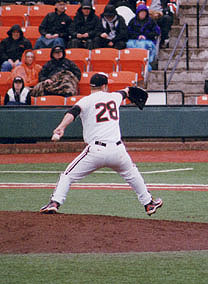 Due to impending inclement weather in the forecast, Friay's game, originally scheduled for a 2:30 start, had been moved up, and is scheduled to start AT NOON!

Continued deterioration of conditions forced Friday's action to be called off. Revised plans call for a double header on Saturday, starting at noon, with the second game to follow.

Oregon St. opens Pac-12 play with a series at California, starting with a Friday afternoon game. The Golden Bears almost discontinued baseball a year ago, before supporters came up with the funding to keep the program afloat. Which helps explain why there are no lights at their baseball field. (And apparently, no high school fields are available.) So it makes would have made for a good excuse to take the afternoon off at the end of the work week and listen to some baseball. Still, its hard to imagine that a team good enough to go to Omaha for the College World Series last year can't get their administration to even put up some lights.

The Bears split 4 games at Nebraska last weekend. The 11-8 win in 11 innings in the series opener Friday was the last in a run of 6 straight California wins. After that, the Cornhuskers wrapped 12-5 and 9-5 wins around a 4-0 Sunday victory by the Bears.

The Beavers won 3 of 4 games in the Nike College Showcase last weekend, their first home games of the season. The victories boosted Oregon St. back into the Baseball America top 25.

The Beavers will go in the first game with lefthander Ben Wetzler (3-0, 4.70), above (RVM photo), who had easily his best outing in a long time, never mind the season, throwing a 7 inning complete game (*) one hitter last Friday evening in the Beavers' 11-0 win in their home opener over West Virginia. Wetzler also only issued 1 walk.

The Bears will also go with a lefty to start with, Justin Jones (2-1, 4.05). Jones went 5 innings last Friday, and left the game with the Bears up 7-4, but didn't get the decision, when Nebraska rallied from down 8-4 with a pair of runs in both the 8th and 9th innings to force extra innings.

Jones threw 4 scoreless innings, but the Cornhuskers got to him for 4 runs in the 5th., all earned. Jones gave up 7 hits and a pair of walks, while striking out 4.

(* The Pac-12 should seriously consider adopting real world game ending procedures for conference games, including using a 10 run rule after 7 innings. Rain is in the forecast for the weekend in the Bay Area, so be prepared for delays and squirt-ball. Another rule in force in every other level of baseball is the ability to call a regulation game complete in the event you have a winner in the event of darkness or weather, both of which could come up in this Cal series, especially with the archaic conditions of the Bears field.)

California plana to go with righty Matt Flemer (2-1, 3.72) in the second game. Flemer went 7+ innings, and tool the loss in his last outing, a 12-7 Nebraska win last Saturday in Lincoln.

Flemer entered the 8th with the Bears down just 6-5, but then got shelled, giving up 4 of the 6 runs the Cornhuskers plated to put the game away.

Flemer gave up 10 runs, 9 of them earned, and 12 hits. He didn't walk anyone, but only got 1 strikeout in 36 hitters faced, so Flemer doesn't have overwhelming stuff.

Oregon St. will counter with Dan Child (1-1, 2/19), also a righty. Child pitched into the 9th inning in his last outing, picking up the win in the Beavers' 8-2 victory last Saturday over Illinois, needing only 2 outs of relief from Zach Reser.

Child threw 109 pitches, giving up 5 hits and a walk, while striking out 9. A second similarly string out outing will cement him as the second starter in the rotation, something the Beavers have been searching for throughout the first few series of the season.

The biggest concern the Beavers probably have heading into the series with the Bears is California's hitting. The Bears have 9 players batting over .300, which could seriously challenge the Oregon St. pitching, an area the Beavers have struggled at times so far this season.

Beaver fans will recall that series for its Friday night rainout, where the opener was played as the second game of a Saturday doubleheader, producing the stadium emptying ticketing debacle, and only the first game was televised. Which was a good game, given the hodgepodge lineup used in the second game, one head coach Pat Casey seemed to treat as a throw away, a move that ultimately cost the Beavers a Pac-12 Championship.

A lot has happened since those days in early May, but one thing has not changed; both teams are eyeing a return to the post-season, and each of these 3 games are going to be vital to attaining those goals.